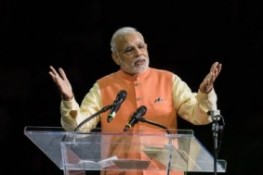 When Shri Narendra Damodardas Modi gave his first speech in parliament he spoke of the end of 1200 years of slavery. Indeed it felt that India had arisen to a new dawn, a “tryst with destiny” that it had not quite kept when it awoke to the midnight hour in 1947.  When an extraordinary man from a very ordinary background took oath as the Prime Minister of India at the culmination of the world’s largest election, not many Indians remained unmoved.

Not that his journey was easy. It had all the makings of a hero’s tale. The story of a young boy who sold tea, who lived in a one room house, who swam a crocodile infested lake, captured the imagination. The diligent karyakarta, the worker, who evaded arrest during the dark hours of the emergency by passing off as a Sikh, and the popular community organizer who became the Chief Minister of Gujarat as a first time Member of the Legislative Assembly (MLA). In all Indian epics there is a period of exile, of separation, of trial by fire. Rama had vanvasa, fourteen years of wilderness, Arjuna endured exile and before Modi could be Prime Minister he too underwent years of trial by fire.

Modi’s agni-pariksha came after the dark days of violence in Gujarat. There was hardly a politician in India more vilified in an internationally orchestrated campaign of calumny fanned by a partisan elite. Witnesses were coerced, false accounts paraded, quotes were made up all with the intent to get one man. Though the Gujarat administration under Modi put up one of the most robust responses against communal violence in modern India, the motivated campaign continuously built upon referencing its own falsehoods.  The law courts and ultimately, the people’s court, repeatedly sided with truth and justice. As his party’s campaign slogan famously said, the more mud you throw, the more the lotus will bloom. And bloom it did as Modi overcame the barriers of the English-class of India, which looked down upon someone who did not speak the Queen’s English, the campaign of hate, the barriers of poverty and caste and captured the people’s heart and imagination.

On Modi’s election campaign, his connect with the people of India was palpable. Here was a politician who was not lecturing the people but empathizing with their sorrows and difficulties. Not reading from a script but reading the audience. And unlike most of those who had ruled India since independence, he did not need to do photo ops outside a poor man’s hut, or “poverty tourism” as he labelled it, he had experienced deprivation first hand.

Of course, victory is the start, not the end of the challenges. India’s problems are vast, compounded by an archaic colonial state apparatus that was never intended for the benefit of India’s people. The Indian state remains a colonial state. It was designed for a singular purpose—extortion and control. The officer at the district level is called a ‘collector’, marking his primary function. The bureaucrats were trained to identify with the civilization of the rulers and look down on the natives. The elected representatives acted like feudal lords. We gained independence but we never became free. Since the system — executive, judiciary, police — was never designed for us, we found ways to get around, to circumvent it, to corrupt it. We never dismantled the colonial state to create a Government for the people. The dynastic rule at the top of the pyramid was embedded into the status quo, its courtiers and darbaris keeping the masses at bay with the dangers of Hindutva and the glories of English while sipping Chianti in Lutyen’s Delhi.

[pullquote]Here was a politician who was not lecturing the people but empathizing with their sorrows and difficulties.[/pullquote]

With Modi at its helm, India has embarked on the journey of reconnecting with its civilizational roots. But as Swami Vivekanda famously said, you cannot teach the Gita to a hungry man. So Modi is rightly focused on economic growth as a priority.  It is best to understand India as a redeveloping nation. Just a few hundred years ago it was one of the richest countries and with forward looking policies and clear thinking there is little reason why it cannot get there again. This is an area where Indian Americans, can make significant contributions. India needs investments across the board, from capital to human talent and NRIs and PIOs can play an important part.

From the ramparts of the Red Fort Prime Minister Modi declared himself to be a servant of the people. A tireless worker, the effect of his personal work ethic is reverberating across his ministers and bureaucrats. Rather than sauntering in towards noon-time after a game of golf officials are expected to show up on time to office.  Rather than leaving at 5 pm, they are seen working till 9 or 10 pm. Clearly the Prime Minister’s seriousness about making the change is rubbing off.

While Modi was in the US, there are a few things he could take away from there. One is studying the effectiveness of local government in the US. While the people of India have voted for transformative government at the national level, most of their problems are local. People end up calling their MP for problems like water, sewage, sanitation and roads.  This is because government in India remains highly centralized as was intentionally setup by the British. Revenue and expenses are not managed locally. The local police is responsive in the US because it reports to the city mayor who is elected directly by the people. The accountability loop is small. There is no gargantuan state-level bureaucracy as in India where the police hierarchy reports all the way to the chief minister.  The same is true for public schooling. Many people in the US send their children to public schools since they function reasonably well, unlike in India, where anyone who can afford it, looks to send their children to private schools. The schools, too, are locally managed and locally funded, making them far more responsive and accountable to the people. In India, schools are part of the state-level structure and teachers look at rural areas as “hardship postings”. Democratizing and decentralizing government functions in India is essential.

[pullquote]With Modi at its helm, India has embarked on the journey of reconnecting with its civilizational roots.[/pullquote]

The second issue is that of language. Many prosperous countries around the world teach engineering, medicine, law and business in their own languages. In India, English is required to practice in the Supreme Court and most High Courts and for all professional education. This has become a barrier for India’s progress. English is an asset but the country needs to also provide equal opportunities for Indian language learners.

The opportunity we have and the dream we see is not just of a change of government but a restoration of our civilizational trajectory. India was a center of learning. There are records of conferences happening in Kashmir where scholars from South East Asia and China participated. Indians sought after knowledge and evidence of that is still found in the Indians that populate the US as professors, doctors and scientists. And we are entrepreneurial as Indians running everything from hotels to Silicon Valley startups to fortune 500 corporations’ show. For too long, the Indian system itself has suppressed the genius of the Indian people.  In a world riven by religious strife, the ancient pluralism and the notion of sarve bhavantu sukhina, let all be happy, shows a path. Millions of Americans today practice yoga, but that is just the tip of the iceberg of Indian wisdom in how to lead a healthy, happy, balanced life in harmony with the planet. With the ascension of Modi as Prime Minister, people of Indian origin throughout the world sense the possibility of India resuming its path of knowledge and wealth creation and the guru of spiritual wisdom. The world will be better for it.

The author can be followed on Twitter @sankrant and blogs at http://sankrant.org.