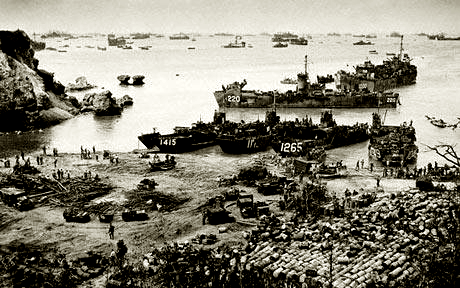 On 15 November 1941, less than a month before Pearl Harbour, the Japanese leadership approved a “Plan for Acceleration of the End of the War with America and Britain.” Among other things, the plan called for the “separation of Australia and India from Britain” and “stimulation of the Indian independence movement”.

Prime Minister Hideki Tojo mentioned India in a string of speeches in the Diet, the Japanese parliament, calling Indians to take advantage of World War II to rise against British power and establish an India for Indians.

Shortly after the capitulation of British forces in the Battle of Singapore in February 1942, Tojo said: “Without the liberation of India there can be no real mutual prosperity in Greater East Asia.” On 4 April 1942 he said: “It has been decided to strike a decisive blow against British power and military establishment in India.”

Japan’s problem was that Mohandas Gandhi’s Indian National Congress was not favourably disposed towards it. Indian leaders feared Tokyo would make India a vassal state. They were mistaken. “Japan at no time planned a major invasion of India or actual incorporation of India into the Greater East Asia Co-Prosperity Sphere, contrary to the suspicions of many Indians in the independence movement,” writes Joyce C. Lebra, American historian of Japan and India, in The Indian National Army and Japan (June 2008).

The Congress leaders had made a strategic miscalculation, for it prevented Tokyo from planning a major invasion – despite stated declarations by Tojo – of India. If over 300 million Indians were under the spell of a hostile Congress, then Tokyo reckoned it would have a major problem on its hands. It was in this backdrop that the Japanese applied a unique policy towards India. The Indian National Army (INA), comprising Indian POWs captured by the Japanese military, was the spearhead of Tokyo’s thrust into the subcontinent. In February 1942 Japan had acquired 50,000 Indian POWs after routing the British forces in Singapore, and these soldiers were asked to join the INA.

Japan was primarily interested in using the INA for propaganda purposes. Army HQ in Tokyo fussed a great deal about how far Japan should go in support of Indian independence. Japanese military officers assigned to train and equip the INA, such as Major Iwaichi Fujiwara, wanted Japan to offer total support in preparation for a quick and blistering attack on British India, but Tokyo had reservations.

For the Japanese brass, India remained on their periphery as Russia and the United States remained their biggest concerns.

The best time to attack British India was shortly after the initial Japanese victories in Asia. “At several points it was conceivable a Japanese invasion of India might have succeeded had it been planned,” writes Lebra. “The optimum time was in the spring and summer of 1942, following Japanese successes in Malaya and Burma, when Japanese air, sea and land power could not have been checked by the British. But Japan passed up the opportunity.”

During the months when Japanese forces were toppling European bastions in Asia, Subhas Chandra Bose, who had quit the Congress because of Gandhi’s reluctance to push for freedom, was camped in Berlin. He was trying to get the German Army to allow the Indian Legion that he had established in Germany with Indian POWs to fight the British alongside Rommel’s Afrika Korps. Bose’s plan was brilliant: when the soldiers of the British Indian Army would see their former comrades in the German lines, it would create confusion and possibly mass desertions.

However, Bose’s maxim “the enemy of my enemy is my friend” did not apply to Rommel and Hitler. The Indian Legion did not find much support with the Nazis. “The vulgar racism and Eurocentricism there, particularly Hitler’s brand, prevent the Axis powers from fully believing in the Indian independence movement,” writes Anton Pelinka in Democracy Indian Style: Subhas Chandra Bose and the Creation of India’s Political Culture (2003). “Hitler holds fast to the myth of the superiority of the white man and shies away from allying himself with the non-whites against the white Albion.”

At the same time, the German Foreign Ministry was reluctant to release a potentially valuable bargaining instrument in dealing with the British. When Bose finally arrived in Tokyo by the end of May 1943 the impact was electric. Of the more than 50,000 Indian POWs, only half had volunteered to fight under the INA, but once Bose’s showed up nearly all of them were ready to fight the British.

Bose’s charisma also appealed to the Japanese. Army Chief of General Staff Sugiyama Gen and Tojo developed a special sympathy for him.

However, the INA-Japan relationship was never a smooth affair. Tokyo was completely unequivocal about the fact that the INA was a black project – a secret war involving the weapons of espionage, infiltration, psychological warfare and guerrilla attacks.

Bose, on the other hand, insisted the INA be used as a single army that would lead the offensive into India. “For Bose the first drop of blood shed on Indian soil had to be Indian,” writes Lebra.

A compromise was reached, with the INA remaining under Japanese command throughout the offensive but fighting in Indian units directly under Indian officers. But like all compromises, it didn’t work very well. “For Bose there was the single goal of liberation of India throughout the combined action of the INA and Japanese forces, while for Japan, Imphal was a limited holding operation subordinate to the high-priority campaigns in the Pacific,” writes Lebra.

“Bose requested increasing support in military supplies, while Japanese capacity to support her campaigns steadily diminished. The two positions could never basically be reconciled, and the differences caused constant daily friction during this military phase of the cooperation.”

In January 1944 – by which time the momentum of victory had considerably diminished – Japan finally mounted a military offensive on British India. Still, the instructions from Army HQ in Tokyo signalled the limited objective of “securing strategic areas near Imphal and in Northeast India for the defence of Burma”.

In June 1944 when the Japanese forces crashed into the British Indian Army at Imphal and Kohima, only 15,000 INA soldiers took part in the fighting. The rest were assigned tasks of intelligence gathering and guerrilla attacks.

Recalling his warfront experiences as a havildar of an engineering company of the INA, V. Vaidhyalingam, secretary and treasurer, Tamil Nadu Indian National Army League, told The Hindu (2 August 2004): “The battle of Imphal turned out to be a long-fought one – for which the INA’s timing was too late in summer. Soon monsoon, not the British army, became our biggest adversary.”

Had Bose been able to attack British India and in full strength two years earlier, the outcome may well have been different. Perhaps no Gandhi or Nehru. No Partition. It will forever remain one of history’s biggest ‘what ifs’.

The weather and the tide of war were turning against the INA. Japan’s game was up after the US dropped atomic bombs on Hiroshima and Nagasaki, and Russia occupied Japan’s northern territories. With its primary backer gone, the INA was effectively disarmed.

What the Japanese managed to do with the INA was exactly what they had planned all along. The INA was truly a secret weapon that fired up Indian revolutionary activity and drove a stake of fear in British hearts. It was the Indian soldiers that had for over two centuries ensured the security of the British in India. It was the loyalty of the military that was the ultimate sanction for British rule in India. With that assurance gone, the British knew their time was up.

As Leo Tolstoy, the great Russian writer had written in a letter to the Indian revolutionary Tarak Nath Das in December 1908:

Like Tolstoy’s drunkards, the INA soldiers initially balked when confronted with the prospect of fighting Britain for independence, in cooperation with the Japanese. It was a volunteer army comprising professional soldiers and many belonged to families that had long served the British.

This loyalty held true despite the British policies which discriminated against Indian officers and soldiers. For instance, Indian Navy officers of all ranks were barred from using the common swimming pools which were for exclusive use of the ‘gora’.

For the British, in ideal conditions, the colonial government would have hanged most of the tens of thousands of INA returnees. After the Indian defeat in the First War of Independence of 1857, the British slaughtered 100,000 Indian soldiers in savage reprisals. But then followed an “untold holocaust” which caused the deaths of almost 10 million people over 10 years beginning in 1857, writes Amaresh Misra, a Mumbai-based historian in War of Civilisations: India AD 1857.

But post-World War II, India was an incendiary place. Serving Indian military officers and men keenly watched the INA trials in Delhi. So did more than two million soldiers who had returned from Europe after World War II, having experienced firsthand poor British soldiering. Most of these battle hardened Indian soldiers were ripe for revolutionary activities. The British quietly released all INA soldiers.

“Despite the military defeat of Japan, and with it the INA, popular support for the INA finally precipitated British withdrawal from India,” writes Kalyan Kumar Ghosh in History of the Indian National Army (1966).

Japan’s role in India’s independence was catalytic and seminal. “In all, Japan trained 353,000 soldiers in Southeast Asia,” writes Hilary Conroy in Japan Examined.

It was these soldiers who prevented Europe from recolonising Asia.