Plight of Hindus in Bangladesh 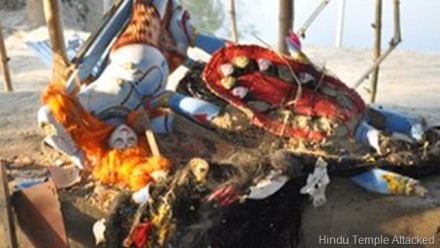 This piece was submitted to IndiaFacts by a Bangladeshi Hindu who wishes to remain anonymous.

On 17 August, I participated in the festive procession organized as part of the Janmasthami in Dhaka. I enjoyed my time in the procession which included about a million participants. But what followed afterwards made it impossible for me to relax or sleep that night. Even tonight I was not able to sleep; hence I thought to pen my thoughts in order to relax.

After the procession ended, I boarded an auto-rickshaw to head home. As soon as I took my seat the rickshaw driver grunted saying:

‘Look at the audacity of these bloody Hindus! They dare organize such a huge rally for that dejected Shri Krishna! They have gone too far, all because of that wretched Hasina, after her reign ends in a few days, we will finish of all these Hindus!’

He turned to look at me after finishing his statement. I couldn’t utter a word, such was my stupefaction. Within minutes a motorbike overtook the rickshaw with the rider screaming:

‘These Hindu dogs have gone too far! We should annihilate them!’

These words from the gentleman riding the bike saddened me more than the rickshaw driver’s statement. I often questioned many surveys done by various human rights groups which indicated flight of about twenty million Hindus from Bangladesh in the past four decades following its independence. But now I can fully understand the reason.

Bangladesh must be the only nation in the world where Hindus are pitilessly abused under the garb of secularism, while the world remains unaware of it. I believe this is because for the other religious communities there is a back-up nation in the form of Saudi Arabia or the United States. But no nation stands up to defend this miserable community of Hindus. That is why this community has been persecuted for years.

An interesting point to note about Bangladesh would be that even though the state has enacted a law to stop denigration of religion, it is only applicable in the case of Islam, as if the other religions are not worthy of respect.

The rate at which the Hindus have been persecuted over the years, the day is not far when Bangladesh would be devoid of a Hindu population.

In conclusion, I still truly believe that I must have done some noble deed in my past life, as a result of which I took birth as a Hindu. Because it is only Hinduism which states- Truth is one, but the sages refer to it in different names. And it is only the Hindus who say as a part of their prayer- May there be happiness and peace for all.

That is the reason that despite of having a population of one twenty million, the Hindus have never imposed their faith on others. This makes me say with immense pride that I am a Hindu.