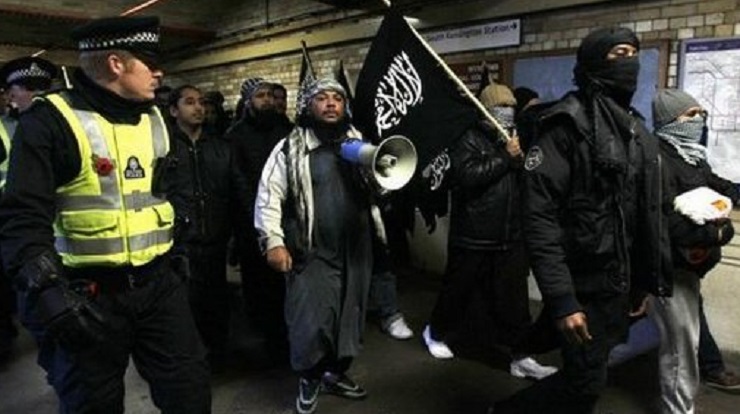 Political Islam began almost from the moment Islam was born. In fact, if we notice the core doctrines of Islam, it is doubtless that politics—rather, political imperialism—and Islam are inseparable. From brutal military campaigns to imposing Jizya (poll tax) on nonbelievers, to never-ending Jihadi attacks, one of Islam’s key rivets has been to deal with non-Muslims.

However, for merely the purpose of distinction, this article uses the term “political Islam.” At present, political Islam has incarnated into a powerful political strategy known as Islamophobia. Simply put, label anything that appears unsavory to Muslims as anti-Islam or anti-Muslim.

As it is defined, Islamophobia is the extreme or irrational hatred or prejudice against Muslims or Islam. The term was coined by the Muslim Brotherhood in the early 1990s to describe attitudes towards Muslims residing in the United Kingdom. The usage of the term over the years, however, is harming the potential for an ideological debate on the root causes of Islamic terrorism, and is intentionally bringing free speech and expression to a screeching halt across the world.

Since the attacks on the World Trade Center, the debate on Islamic fundamentalism has acquired an urgency not witnessed previously. Notwithstanding this urgency, the media and academics continue to restrict themselves to common socioeconomic factors.

While military strategy and alliances have been mulled over and chalked out by successive administrations, there has not been a substantive discourse on the ideological root causes motivating Islamic terrorists. The senescent panoply of explanations includes alienation, joblessness, racial discrimination, and poverty, which are spurring people to kill and be killed for Islam.

Curiously, this narrative does not change despite the alarming success rate of ISIS in recruiting Muslims and non-Muslims across the globe. For example, there are countless horror stories of how women travel from their middle and upper middle class homes to ISIS controlled territory to play their role in reestablishing the Caliphate, to assist in perpetuating the sex-slave market, or to aid in brutalizing women for not following regressive Islamic rules. Of course, it is obvious they are motivated by more than racial discrimination and poverty.

The fact is that many ethnic/religious groups have lived through these realities in Western nations, and still have not resorted to adopting a path of murder and mayhem. When Congresswoman Tulsi Gabbard of Hawaii sought to dispel this well entrenched narrative by stating that President Obama is making a cardinal mistake by not linking radical Islamic theology with actions of ISIS, her remarks were less than appreciated in many quarters.

Islamic advocacy organizations have not done anything to help either. The American Muslim (TAM) and Council on American-Islamic Relations (CAIR) make every effort to ensure that the aforementioned list of reasons is the prevailing narrative. CAIR has even compiled a list of so-called Islamophobes. The group does not seem to be disconcerted by the cold-blooded killing at all. But CAIR and other Islamic groups certainly become pretty vexed when someone posts innocuous comments on social media.

Truly, this Marxist-inspired narrative finds a lot of resonance with the media and academia. The media and academic institutions aid in perpetuating the prevalent narrative by creating a victim mentality among the Muslim population. This mentality is only serving to cement justifications for radicalization. I will not say that the educational institutions are radicalizing young Muslims per se, but fed with a constant dose of victim mentality complex, they are certainly, albeit unwittingly providing that fuel.

When I was an undergraduate student, it was commonplace for liberal arts professors to rant about Israeli and Indian atrocities in Palestine and Kashmir respectively, but the part about the Islamists killing thousands in the name of theology was omitted. It became acutely evident that Muslim students in courses such as Middle Eastern, African, and South Asian studies, behaved like and were treated as star victims who were bearing unimaginable atrocities.

Most Professors in those departments encouraged and sustained such victim mentality complexes, and challenging this account would make you highly unpopular. Even if the busybody policing of the West is to be wholeheartedly condemned, it is a matter of historical fact that Islam predated any Western interference in the Middle East region.

Effects of Islamophobia on the Debate on Terrorism in India

In India, which has a bloody history of over 1200 years of heinous brutalities against Hindus should have made the modern day academia and mainstream media a trailblazer in understanding the root causes of continuing Islamism.

However, academics have candy-coated history to a staggering extent. Niceties abound on Akbar, and outlandish reasons are provided for why Aurangzeb destroyed Hindu temples. The wounds are deep and still raw.

When Islam entered India, it not only satiated its bloodlust by decimating sacred structures, but also left a devastating impact on the Hindu psyche. For example, dietary habits, styles of dress, language, and even names of places were changed to reflect Islam’s indelible blemish.

These devastating actions of long ago have seeped into modern India’s narrative in a big way. The fact is that terrorism cannot be explained away by poverty. Many Islamists hail from middle, upper middle class, and even affluent backgrounds, and neither money nor access to education is an issue for them.

So what is the reason? When there is a genuine attempt to explain Islamist violence through theological teachings, the media and academia should sit up and take note, rather than putting on a spectacular show of fake outrage.

Although the word Islamophobia is not that widespread in the media and academia in India, the practice of constantly labeling anything distasteful to Muslims as anti-Muslim does manage to do the trick of bulldozing one into political correctness. When Dr. Subramanian Swamy suggested ways to defeat Islamic fundamentalism in India, his proposition was not weighed on merit and practicability, but rather on the “hurt sentiment” of Indian-Muslims.

Similarly, the galaxy of always-ready-to-please-and-appease-Muslims Left parties like moths to a flame, have rapaciously taken to the absolutely baseless phrase of “Hindu/Saffron terror.”

These antics do not help soothe the Islam-inspired appetency for blood. It will only serve to divert attention in the long run.

Hindus make up the majority in India, so stirring up fears of majoritarianism is easy. But Hindus have always welcomed one and all to their homeland, which has proven pernicious to their very existence. It is not majoritarianism or Hindu revivalism that the media and academia in India should be worried about. They should immediately take stock of the very real and looming threat of Islamic fundamentalism.

Little or no attention is paid to the ongoing Islamist violence against Hindus. The trend in narrative was set by watering down Islamic invasions as mere political instruments to obtain power. Nothing is said about Islam’s inveterate hatred for anything Muhammad did not approve of.

So, while the silly opposition to International Yoga Day made headlines, the brutal attack on an Indian man by a Muslim mob in Qatar for posting anti-Islam comments on his Facebook page, barely received the usual media frenzied indignation. The mainstream media also did not show much concern when a Hindu nursing lecturer was mercilessly hacked to death in Bangladesh in broad daylight for not wearing a hijab.

The lack of enthusiastic coverage is not restricted to only sporadic events, but in large scale riots, where Hindus are clearly the victims, the media voluntarily ties its tongue in knots. So if the media’s imbalanced reportage is to be corrected, would the root cause of Islamism stand exposed? In many respects, yes it certainly would.

The media’s influence in molding public opinion should never be underestimated. Mass media provides ready to apply opinions/concepts. This leads many people to swallow hook, line, and sinker what is being dished out. So, when headlines are dripping with anti-Hindu venom, it is what the public is absorbing. Fortunately, from observations, this poison is limited to the English language media.

Nevertheless, it would really be a long term benefit if the pro-Hindu fledgling alternative media outlets were to be bolstered by committed and ardent benefactors and authors. Supporting such outlets will aid in disseminating the salient analysis set forth by thinkers of considerable repute. This may one day open the door to a permanent solution to the problem of Islamism.