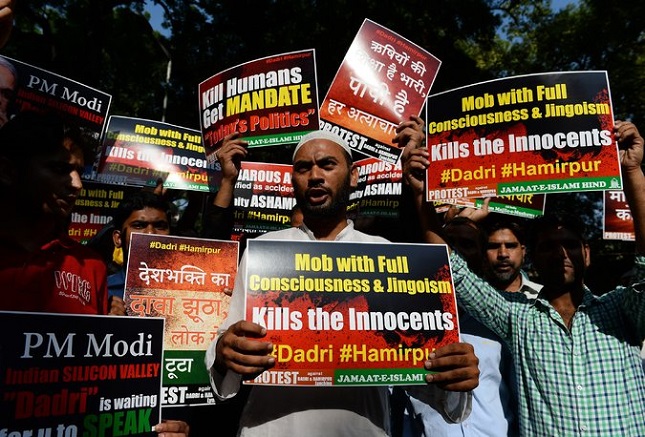 When I was in the third standard, we were taught a story from the Mahabharata. All Kaurava and Pandava brothers are taking lessons and are asked to memorize them. All the 105 boys memorized their lessons well except Yudhishthira. The lesson included a list of 10 good habits, one of which was “we must not let anger win over us”. Yudhishthira continued to claim not having mastered this simple one line for 10 days. Finally, the Guru got exasperated and caned him, and asks him why he is not able to memorize this simple line.

Yudhishthira disarmingly said, “I am practicing still on how to overcome my anger. I still get angry at times so till I have overcome my anger completely, how can I claim to have learnt the lesson completely?” The teacher threw away the cane and wept, for he had forgotten the lesson and insisted only on rote learning.

This simple story told and retold when I was a kid beautifully explained the importance of practicing what you preach. “Intolerance is rising” say some of the Adarsh left liberal Media Journalist, and the actors, and directors, and the academicians.

They claim it is so high that they are getting suffocated and their freedom of expression is stifled. They give interviews to all the publications, domestic and global and then give speeches at all forums and take out rallies to make their point. Fine, point taken. This is what they feel. This is a democracy and they have a right to their opinion.

Then we have another set of individuals, who don’t agree with them, so they take out a march to protest this assertion and say that everything is right. How dare you question our opinion, says the left liberal. Shekhar Gupta furiously criticized Anupam Kher saying it was “wrong” to take out a protest against protest. So it is legitimate for one set to protest against the government but “intolerant” for anyone daring to question their protest.

Aamir Khan questioned the environment all around and claimed he felt despondent and gloomy at a public function. A large number of people, tens of thousands, and many celebrities disagreed with him. Some exercised their right to uninstall the app of Snapdeal which is a brand he endorses.

Barkha Dutt claimed it is “sickening” that he is being punished for speaking his mind.

So Aamir has the right to get hurt and feel alienated and speak his mind at public function but a common man has no right to decide if he does not want to support the brand which supports Aamir.

A large number of intellectuals and historians return awards given by their favourite party and denounce the current government headed by a party they hate. Another set of historians write a letter denouncing them and protesting them. One of the writers in the second group, Vikram Sampath is appointed as Director of the Bangalore Literature festival.

Some writers and ministers withdrew from the Festival because Vikram Sampath had criticised the writers and supported the “right wing intellectuals’.

So the simple message that is being conveyed is criticism and opinion is expected to be a one-way street.

By this logic, some ideologies and some individuals are entirely above board and exempt from criticism. Only one set has all the right to criticize everyone, and if someone questions their ideology, it is intolerance.

Why is this so new? Did this not happen before? Did we never have alternate viewpoints?

We always did. What changed is that social media, internet, and the rise of citizen consciousness have allowed voices of articulate common men and women to be quickly amplified and reach all corners. People are no longer dependent on print and electronic media to disseminate news and views.

So all views are getting aired and that makes the certain class of people who had monopoly over manipulating discourse very uncomfortable and “intolerant” of this inconvenience. And since this class draws their inspirations more from Greek and Roman mythologies, chances that they have read the Yudhishthira story and learnt the importance of practicing what they preach are slim. The loss is theirs, for people have the power to form views and inform others now.