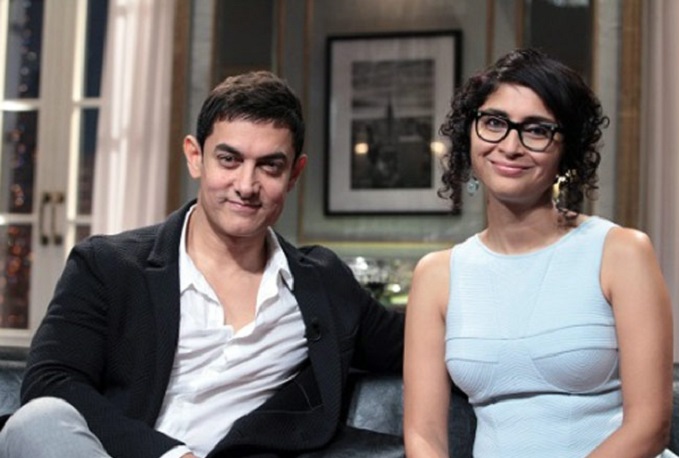 Film star Aamir Khan’s wife believes that the Narendra Modi government has been such a calamity that she wants to leave India—and he doesn’t disagree with her over the issue of ‘growing intolerance’ in the country.

Okay, the prudish Pahlaj Nihalani is part of the baggage of the new dispensation, as also are many other illiberal characters; now James Bond can’t kiss a lady more than a stipulated duration; but, when all is said and done, we should not lose sight of the fact that India is not hurtling towards apocalypse.

By no stretch of imagination do these figures suggest that India is a seething cauldron of warring communities, or that it has started looking like the Wiemar Republic in its last days, about to be taken over the Nazis.

But speaking at the eighth edition of the Ramnath Goenka Excellence in Journalism Awards, Aamir Khan said a sense of “insecurity” and “fear” had seeped deep within society, even in his family. “[Wife] Kiran and I have lived all our lives in India. For the first time, she said, should we move out of India? That’s a disastrous and big statement for Kiran to make to me. She fears for her child. She fears about what the atmosphere around us will be. She feels scared to open the newspapers every day. That does indicate that there is a sense of growing disquiet.”

Apart from bad English (a disastrous statement!), there are several aspects of Khan’s garrulous remarks that need to be examined.

It looks like Kiran Rao began reading newspapers a few months ago; she was ignorant of the evils of the Sonia Gandhi regime, whose hallmarks were stupendous corruption, gross incompetence, jihad- and Naxal-friendly attitudes, policy paralysis, and entitlement mania.

It needs to be emphasized that the failings of the Modi government are mentioned in relation to the high expectations from him; on every possible count, his government fares way better that its immediate predecessor.

Even on the subject of tolerance. After all, the draconian Section 66A was introduced by Sonia’s followers. The Modi regime would have covered itself in glory had it repealed it; instead government lawyers defended it in the Supreme Court. The government partially redeemed itself by welcoming the apex court judgment invalidating the section.

We should also not forget the Congress role undermining the ideas of tolerance and liberty in general. It was the Jawaharlal Nehru government that brought the First Amendment in 1951, while imposing “reasonable restrictions” on the freedom to expression, practically negated the spirit of the Constitution.

There are myriad instances to show how films, books, and other works of art were proscribed, unfriendly intellectuals harassed, non-Leftist historians marginalized, and free market economists harassed in the pre-Modi era.

Evidently, Kiran Rao is unaware of these facts. And where does she—and perhaps her husband—want to go? She can’t go to Pakistan, Saudi Arabia, or any other Muslim state without seeing her own liberty getting eroded. At any rate, she would most probably be forced to embrace Islam in a Muslim country. Aamir Khan too will not be able to act in a movie like PK in, say, Pakistan.

Europe, the US, and other Western lands are also supposed to be inimical to Muslims according to the narrative she and her husband subscribe to; we are told that there is a lot of ‘Islamophobia’ and ‘racism’ over there.

It is depressing that the media has given such prominence to Aamir Khan’s platitudinous remarks. On Paris attacks, he said, “A person who is holding a Quran and killing people may feel he is doing it in the name of Islam, but as a Muslim, I don’t feel he is doing an Islamic act. He may claim to be a Muslim but we should not recognize him as that.”

A Maulana Wahiduddin Khan, a Bernard Lewis, or a Robert Spencer saying which act is Islamic and which is not can be taken seriously; but somebody who never went to college and is not known for any measure of scholarship parrots clichés, and the great editors focus on his blabbering. Our newspapers and channels can do better than that.