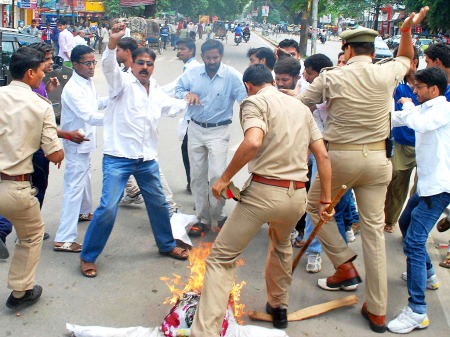 This is an interview that the Aaj Tak team had with the SDM and the CO at Muzaffarnagar.

Aaj Tak (AT): SDM sahib, were the homes of the rioters searched or not?
CO: No no, of course, a full search was carried out.
SDM: Yes, search was done, and the culprits were caught.
CO: Off the record, if I were to tell you the whole thing, the day this incident (deaths) happened, a full search was carried out. We arrested 12 people including all those around. That we did not find any illegal arms is a different matter.

AT: But did you catch the real culprits?
CO: Absolutely! They were part of it (the murders), but despite that, they were not arrested and the FIR was lodged in a manner that all of them got released. After that, the SSP and the DM were transferred out because the search was conducted in their presence.

AT: Oh! So you had caught the real culprits?
CO: Yes, we had caught them. But when we saw the names in the FIR, there was just one person named in it. We were helpless.
SDM: A tainted FIR was prepared.

AT: And then they were let off?
CO: (People from top) then said that if their name is not in the FIR, what is the point in detaining them?

AT: So then you let all of them off?

Three dead bodies were lying in the village. The suspects were caught on the spot but were let off under pressure. The truth is that SSP Manjul Saini and DM Surendra Singh who had searched a few houses were transferred. After this, the new DM took over and changed the course of the investigation.

AT: When did these incidents (of death) occur? When were the suspects arrested?
CO: The episode happened around 2 PM.

AT: No. When were the arrests made?
CO: Around 4 or 4:30 PM just when the dead bodies were picked from the spot.

AT: Then how were the suspects let off?
CO: We let them off late in the night after orders came from the top.

AT: After the DM’s transfer?

The law was made a mockery of in Kawal. The DM was transferred because he undertook the search. A fake FIR was lodged. The suspects were let off. And then the riots followed. Read on.

AT: The accused that you had caught, were they the actual culprits?
CO: Look, it’s like this. How do we say this? It is what the eyewitnesses have told us
SDM: They were the prime suspects.

AT: Prime suspects…that is where the big mistake happened and the message went to the other community.
SDM: It is unfortunate for this country, for the system…whenever such an incident happens, the politicians come and sit there.

These officers believe that the search they carried out in the wake of the double murder case upset a few influential politicians who were disconcerted with the DM and the SSP and had them transferred.  After this, the communal sentiments flared up. Had the DM and the SSP not been transferred that night, the crime would not have transformed into a communal riot.

But the bigger expose was done by the Second Officer of Fugana police station, before whose eyes village after village was reduced to ashes.

The attack on the evening of 7 September on those Jats returning from the Mahapanchayat took a different colour the next morning in Shahpur and Budhna tehsils.

The reactions to the assault on those returning from the Mahapanchayat resulted in unprecedented violence in these towns, which surpassed what would have happened in 1947. The impact of the violence on 8 September was the maximum in the Fugna area.

AT: How many casualties do you have here?
Second Officer R.S. Bhagaur (SO): Approximately 16.

AT: So you mean to say the police force could not reach the spot on time?
SO: Police reached on time but the force was small.

AT: When the riots started, how many of your people were there?
SO: What the situation was in the district back then, I don’t know…I don’t know what was happening in other police stations…but when officers came to know of the situation, they started making the necessary arrangements to contain it…I could not establish contact with them. But now there’s a reason for contacting…I was firing from one hand and talking to them on the mobile with my other hand.

AT: Definitely…
SO: See, this is practical…

AT: For how long were you unable to make contact with the officials?
SO: Arre bhai…we kept trying for hours…we were stuck. Our lives were at stake. We would take out our mobile and then put it back in our pockets. Such was our condition.

AT: When you were manning the situation, did you face a shortage of firearms?
SO: See, I am telling you the truth: we have no firearms. The firearms that we have are not ours and the ones that we have don’t work. Bhai, and the one that fires, that is by God’s blessings. Bhai, I’ll tell you something that nobody will tell you…

AT: In our view, Azam Khan played the main role. It was he who pressurised in getting them released.
SO: That’s right! That’s right!

AT: This is totally political. They are baking their bread playing politics with riots.

It is obvious that the Second Officer knows who played what role in these riots. But there are officers in higher position in the police and the administration, who have made startling revelations that will leave you dumbfounded.