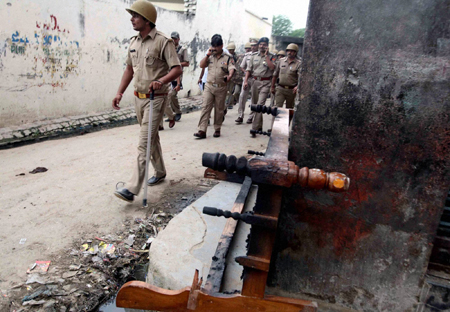 The truth of what happened in the Mirapur Thana jurisdiction in Muzaffarnagar will scare you. The kind of arson and murder that the Muslim rioters indulged in is frightening and gruesome.

The riots continued unabated from 27 August till 8 December, and everyone from the administration to the Government failed to control the carnage. It is obvious that the political leaders were looking after their personal interest even as the riots raged on. Muslim rioters killed innocent people on the streets in the Mirpur police jurisdiction which falls under SHO Aniruddh Kumar Gautam. What is really surprising is that the police shied away from acting against the rioters. Gautam believes that the simultaneous transfer of the DM and the SP left the district administration leaderless. Gautam also avers that some leaders of the Samajwadi Party were, in the past, putting pressure to have the DM and the SP transferred and this opportunity gave them the perfect excuse to do so.

Aniruddh Kumar Gautam (AKG): The earlier DM and SP were ours. Both of them together used to manage the situation competently. But the Government in the middle of the night, a few hours after the incident, removed them.

Aaj Tak (AT): What was the reason for this removal? Were their dealings not correct?AKG: DM’s dealings were very good. Else how would he have survived for two years? The same Government had posted him as DM here.

AT: What happened…what were the reasons…that night?
AKG: Everything is a political stunt.

AT: That means removing them was a wrong decision?
AKG: These people (Samajwadi Party leaders) wanted the DM and the SSP removed ever since the Karwariyas undertook their yatra.

AT: Why?
AKG:  Maybe the Samajwadi Party leaders and activists thought that the current SSP and the DM were not doing their job properly…right or wrong, this is the real reason.

Actually, the incident of 27 August in Kawal village began with eve teasing which then transformed into a clash between two communities. It is true that some people died in this incident but it is also true that despite this, it did not acquire any communal overtone. The problem started when the DM and the SSP started conducting door to door search to nab the culprits.

AT: This was commendable work that they did. [But they released them later]
SS: And what else could we have done? This was a decision taken at the top. We just followed it.

AT: This is vote bank politics and it is terrible.
SS: Yes.

AT: Had they removed the DM and the SSP after two or four days, the matter would not have gotten out of hand so badly.
SS: Yes, it would not have come to this pass.

Transfers, postings and suspensions were not the only games being played under the pretext of riots. The sinister objective was to earn more votes. This was told to us by the people who were present at the site of the riots.

Wherever the secret camera of Aaj Tak went, revelations made by the officers of Akhilesh Yadav’s administration shocked us. And we are now presenting this truth to the world.

Who should be arrested and who should be released is probably a decision the police do not take in Uttar Pradesh. Inspector Rishipal believes that this is the first time that the riots have spread more to the villages rather than the urban centres. Had adequate number of police officials been posted in rural police stations, so many Dalits would not have died in the riots. The violence continued unabated in the villages because the police force was sent after considerable delay.

AT: Were they patrolling till late in the [previous] night?
RS: No. I have 20 constables and about four senior constables. So, if there is large scale violence in the village, I cannot control it using four constables…my thought is that with whatever limited force I have I should use them entirely to control violence one place at a time. But by the time I controlled the violence at one place, it erupted in a second, and a third, and a fourth.

AT: Did you have less force?
RS: The force wasn’t enough for deploying it in every village.

The SP (Crime) of Muzaffarnagar, Kalpana Saxena was responsible for several police stations in different riot-affected areas falling under her jurisdiction. She believes that somewhere the riots acquired political overtones.

Kalpana Saxena (KS): See, there are many things that have been said. But right now we are under a lot of pressure. We have a lot of work to do. We will speak at leisure one of these days.

Aaj Tak (AT): But madam, please let us have the answer. Why was the murder (of Gaurav and Sachin) given communal colour?
KS: Look, what can I say? But if I were to look deeper, there’s a lot that is political in nature in this episode. The Muslims feel one way and the Hindus feel that excessive Muslim appeasement is happening.

Aaj Tak’s Operation Danga brought out the truth that led to Muzaffarnagar erupting in flames. The communal violence may not have been pre-planned but there’s definitely a political conspiracy in stoking the communal flames.