The real truth about the Muzaffarnagar riots: Part 4 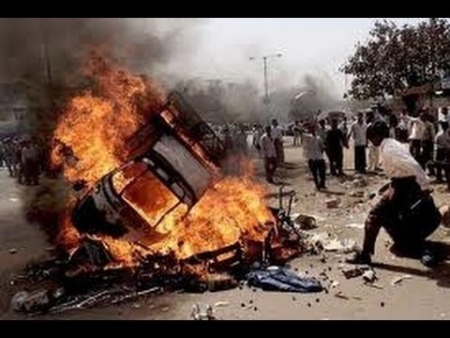 Read Parts 1, 2, and 3 of the Muzaffarnagar riots report accessed by IndiaFacts.

The local media gave adequate coverage to the violence in Muzaffarnagar and Shamli. Dainik Jagaran, Amar Ujala, and Muzaffarnagar Bulletin have reported the real reason for the riots and the violence that ensued in an unbiased manner.

We present below some of the prominent excerpts (translated into English) from these media houses.

The lock of fear hangs on the door of the city

Mahendra Tyagi, resident of Police jurisdiction Mansurpur in village Saujanitagan, along with his friend Rajesh, had come on a Saturday to Meenakshi chowk for some work. At this time, the condolence meeting for the Kawal incident was in progress. Post afternoon, people from the Muslim community who had congregated there physically assaulted Mahendra and broke his head.  (31 Aug 2013)

A wave of Muslims descends on the streets of Muzaffarnagar

Muzaffarnagar: After the Friday prayers, a wave of Muslims descended on the roads. Those who had come out included elected representatives as well as ordinary Muslims. At Shaheed Chowk, this crowd converged into a public meeting. In this meeting, the speakers sought to penalize those who had allegedly attacked the homes of minorities. It is noteworthy that despite tensions and the imposition of Section 144, the district administration gave permission for this meeting. There was no sign of the fire stoked by the incidents in Kawal coming to an end. While the administration was busy trying to stop the condolence meeting and the Mahapanchayat from happening on 31 August, the Muslims took to the streets post the Friday prayers. As per the predetermined programme, the crowd gathered at Shaheed Chowk. It was attended by BSP MP Kadir Rana, former MP Syed Dujma, MLA Zameel Ahmed and Noor Salim Rana among others. (31 August 2013)

Jansat: Two brothers from the Kawal village were killed so brutally that it shook the soul of those who witnessed it. The brothers tried their level best to save their lives but were helpless before a dozen or more attackers. After they fell, the attackers mounted their chest and beat them mercilessly with the top part of a stone grinding wheel till the time the victims couldn’t breathe anymore.

Death is a bitter truth which can happen anytime in any form. But the way the two brothers were murdered defies all human sensitivities.

Eyewitnesses tell us that when they heard gunshots and arrived at the Chowk, they found a young man soaked in blood lying there and another youth was being chased by six-seven people who had knives and rocks in their hands.

The man ran frantically in a narrow lane to save his life. Sometimes he would run into a wall or fall on the road. However, wherever there seemed to be an option to escape, he found himself attacked by a mob. Finally, the attackers got him and put him down. The man sat on his chest and shouting a chant, sliced his throat. Others pounded his head with stones while those with knives stabbed the rest of his body.

So that the person may not escape alive, one of the youth brought the stone grinding wheel, sat on the victim’s chest and smashed it repeatedly on the victim’s head till he was satisfied that the victim was really dead. Another youth who was also assaulted by the grinder did not even have the opportunity to stand straight. He died in that condition.

The two dead bodies lying on the spot were screaming out the barbarity inflicted on them. Both the young men did not even have footwear. The wretched condition of their clothes indicated their desperation to escape death. While they were being chased, they sometimes fell in a drain and sometimes on the street.

Blood flowed like water. One of the victims had his face to the road with his skull split open and he continued to bleed. His head was hit repeatedly by the stone grinder. Not just young kids but even adults who saw this gruesome scene were shaken. Some young children came out but after seeing this ghastly sight ran home and snuggled up to their mothers. There was a deathly calm all around and outside there was an environment of undeclared curfew. (27 August 2013)

Dalits and the poor targeted by the Muslims

Shamli: The police have registered four separate cases under serious offences following the violence in Shamli. Three people were arrested for murders during the riots while one person was arrested for assaulting a municipal cleaner. In the case involving an assault on Sagar, the municipal cleaner (resident of Mohalla Timrasa) Jai Bhagwan filed cases against Israr, his brother, the director’s son, and about 10-12 unidentified people under IPC Sections 147, 148, 149, 323, 504, 506, 153(A) and under the SC/ST Act. The police have arrested Waseem, resident of Timrasa.

Jansat: Despite the district being under Section 144, people were breaking the law with impunity, and those responsible for maintaining law and order turned a blind eye. On Tuesday, thousands of Muslims got together and indulged in provocative sloganeering. As a result, the highway was jammed for several kilometres. The officials in the administration were witness to this blatant violation of Section 144. The administration was helpless before those violating this Section.

In continuation, thousands of Muslims had gathered in district Jansat close to the police station near the Khatauli intersection. The administration seeing the situation go out of hand closed the Panipat-Khatima national highway. In the process, the highway was jammed for several kilometres. The thousands of Muslims who had gathered then met up in a Madrassa. The officials in the state administration were aware of the situation. They also went to the spot of the gathering of these thousands but could not act against the lawbreakers. (4 September 2013)

Mirapur: The embers of the earlier Kawal carnage had not even gone cold when on a Saturday, a group of Muslim miscreants assaulted hundreds of people at a religious place in the village Mujheda and brutally killed many. If you speak to the near and dear ones of those dead, they tell you that one person is grievously injured and three are missing.

Eyewitnesses tell us that when the villagers of Mod-Khurd were passing by the religious place in tractor trolleys near Mujheda village, Muslims in hundreds attacked them. The assailants managed to pull down five-six of them from the trolley whereas the rest could manage to save their lives and escape.

After that, the Muslim mob killed Pappu and Jogendra. Hundreds of people first stoned both of them and then slashed their throats with sickles. They then shot at them at close range. The mob left all the three murdered men on the spot but associates of these murdered men tell us that the mob had managed to pull down five or six of them; therefore the other three are still missing. (8 September 2013)

The attack on Bassi in Shahpur sparks off violence

Shahpur: People from the minority community stoned and pulled down four-five people from the tractor trolley they were travelling in, and assaulted them. This incident occurred in the Shahpur police jurisdiction in Bassi Kalan village when they were en route to attend the Mahapanchayat. Thousands of people from the villages of Bhawra, Adampur, Shikapur, Bhawrakhur, and Sisoli were travelling in tractor trolleys on a Saturday to attend the Mahapanchayat. When this incident came to be known to those travelling in the tractors behind, it brought thousands of people from each community to blows. Approximately a dozen people from each side were injured. The grievously injured were admitted to the district hospital. The police arrived on the spot to take control by resorting to firing and lathi charge. One constable and a dozen policemen were injured. (8 September 2013)

Bhopa: People returning from the Mahapanchayat were shot at in the Jolly village by people from the minority community injuring many in the process. Two people were reported missing. The rioters set half a dozen tractors on fire. The DIG of Meerut along with a heavy contingent of police and PAC were managing the situation.

On Saturday evening, people from the villages of Rahmatpur, Tejalheda, Baseda, Kakrala, Bhokarhadi, and Chichroli, were returning in tractors from the Mahapanchayat. When they reached Ganganhar in village Jolly, hundreds of people belonging to the minority community hiding in sugarcane fields opened fire at those travelling in these tractors. This sudden firing led to a stampede. People abandoned the tractors and escaped. Satyaveer, Subash, Ajay along with half a dozen people were injured. Two people are missing. After this, the assailants set fire to the tractors. The police and the PAC reached the spot on being informed. The assailants even fired on the police and PAC. After this, K. Satyanarayan, the DIG of Meerut, Arvind Kumar Tripathi the SDM of Jansat, Jagatram Joshi, CO of Jansat, Yogendra Kumar CO traffic police, and the PAC RAF reached the spot and took control of the situation. The word is that the two missing youth have been murdered and their bodies dumped in Ganga Nahar.  (8 September 2013)