The real truth about the Muzaffarnagar riots: Part 6 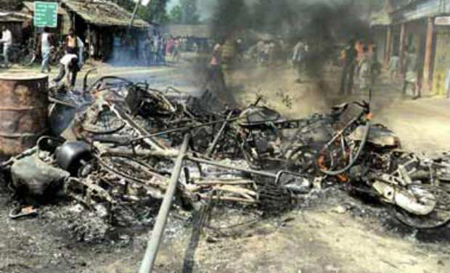 Azam Khan is responsible for everything: Naresh Tikait

Muzaffarnagar: Naresh Tikait, Chowdhury of Baliyan Khap and National President of the Bharatiya Kissan Union, holds SP leader Azam Khan responsible for the riots in the Jat belt. Naresh alleged that it was all Azam Khan’s doing. “The conditions that the Government has agreed to after 50 people have died, had they agreed to these conditions earlier, such a situation would not have risen.” (14 September 2013)

We want to study, create an alternate road

Muzaffarnagar: After the death of Sachin and Gaurav, the girl students had stopped attending school. In such a scenario, with the Chief Minister before them, the students put forth their grievance passionately and handed over a demand asking for a conducive environment for education. They also asked for an alternate route (to get to Kawal) to be able to attend school. In a letter written to the CM, the girls stated that they could not go to study through the existing route to Kawal. They demanded that the kaccha road that goes to Jansat should be concretized, so that they can travel easily. The girls also demanded adequate security on the route. (16 September 2013)

Is the colour of our blood different?

Muzaffarnagar: “Is the colour of our blood different? Do our riot-inflicted injuries not hurt? Is the pain of separation, from our near and dear ones, any different? Why is it that everyone, from the Chief Minister to the Prime Minister visit only the Muslims to assuage their grievances?”  This was the grievance of the Hindus living in Kamalpur camp. The Hindus were upset that the Chief Minister and the Prime Minister visited only the Muslims but no one asked about their plight.

The pain of the 300 Dalit families who had sought refuge in the Ravidas temple in Kamalpur was obvious. In a conversation with Dainik Jagran, they raised the point that the CM and the PM had come till Bassikalan but not travelled another three kilometres to Kamalpur. “Do they not have the time or the intention?” The victims alleged that the administration was biased to begin with, which was the main reason for the riots. They were repeating the same mistake and if this continued then the Government would be responsible for widening the gap between the two communities instead of bridging it. People from Shahpur, Palada, Bassi, Sikheda, and Kawalgaon have taken refuge in the Kamalpur camp. These were the people who did not want to return to the villages with a Muslim majority for the want of security.

Sunil from Kamalpur camp alleged and asked, whether SP and Congress (by keeping their distance from the Hindu victims) were only concerned about the Muslim votes. If that was so, then they should openly say so. Latha, also from the Kamalpur camp, asked whether the CM and the PM had even bothered to enquire about the plight of the Hindus? “We are helpless and have had to leave our homes but no one is willing to listen to our problems”. Similarly, Sanjay Kumar, Rajbi, Vijaypal, Mithilesh and others expressed anger and blamed the Government for their wilful negligence of the Hindus. They asserted that leaders chasing the vote banks should not forget that “we have a vote too.”

Also, people in this camp questioned why no one was talking about the killings in Jolly canal when everyone was so concerned about Kutba, Fugana and Lisad. In the Muslim majority villages, such as Ganganhar, Jolly, Nawagaon, Roodkala, etc, unarmed Hindus had been attacked, killed, and thrown into the canal. But none of those involved in these atrocities were arrested and neither had the administration taken any strong step. Despite repetitive demands, the canal has not been dried so much so the process of recovering the dead bodies from the canal still continues.

The Khap was also very upset with the CM and the PM’s visit that reflected no concern for the Hindus. The Khap leader alleged that from day one, only one community had been heard and this continued till date. Naresh Tikait, the Chowdhury of Balian Khap and President of Bharatiya Kissan Union said, “in this entire episode, Jats are being maligned needlessly. For the PM and the CM, everybody should be equal. We don’t have a problem if they went to Bassikalan, Titavi and Kandhala but they should have kept an equal sight on Purbalian, Kakda, and should have gone to Jolly and found the truth for themselves, instead of overlooking one side in favour of another.” Harkishen Singh of Ghatwal Khap said, “the way the visit was one sided, it would be adequately responded to.” (18 September 2013)

Did the farmers’ dead bodies get washed away to Bulandsheher?

Muzaffarnagar: The truth of the violence that happened near Jolly canal Muzaffarnagar, has still not emerged. It is from this place that the Anoopsheher stream of the canal starts. It is believed that many dead bodies, bikes and tractors were washed away in this canal. During the search process, several pairs of footwears were recovered from this canal but the administration is silent about this.

This was highlighted by Gyanendra Singh (chairman of Nagar Panchayat Bhokhrahi), Udayveer Singh Rampal, Pratap Singh, and Manoj from Rahmatpur village, Bhokar Rahedi. Ajay Kumar of Rahmatpur, Sonveer Singh of Bhokar Rahedi and Brijpal of Baseda were killed in this violence. It has been alleged that twenty-two tractors and hundreds of motorcycles were thrown in the canal. Only six bikes have been recovered so far. (20 September 2013)

The Government’s open lies in the Jolly violence

Muzaffarnagar: The burnt tractors, which were used by those returning from Nagla Madaud after attending the Mahapanchayat, are a grim reminder of the terrible tragedy that struck Jolly.  Even after 23 vehicles were burnt, the administration does not consider it to be substantial enough to take action. A report that makes light of this colossal tragedy where 13 of 17 tractors were burnt has been sent to the administration.

On 7 September, those returning from Nagla Madaud were attacked unprovoked. These people belonged to villages such as Baseda, Gadla, Nirgajni, Tevda, Baheda, and others. About half a dozen died in this attack. Those sitting in the tractors barely managed to save their lives. The attackers torched 23 vehicles including 17 tractors, 5 bikes and one car. Some tractors were reduced to ashes whereas others had been rendered useless.

After the violence ended, on the instructions of the State Government, the district administration prepared a report. In his report, Arvind Kumar Tripathi the SDM of Jansat reported that 13 tractors were likely damaged badly, 4 motorcycles were thoroughly wrecked and a car was possibly damaged. The same report was presented to the CM and the PM during their visit. It is said that the State Government will decide on the compensation to the victims based on the report. (21 September 2013)