The real truth about the Muzaffarnagar riots: Part 7 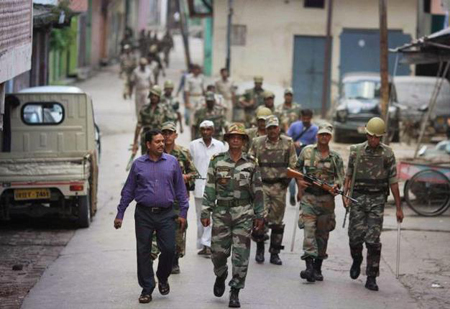 Kutba, Muzaffarnagar: Thambedar Chowdhury Mangeram’s son, Chainpal drives a vehicle in Delhi. It has been more than three months since he had last visited the village. However, his name features in the list of victims who suffered from the violence that ensued in Kutba. This is not an isolated case.

Instances of fraudulently enrolling names in the list of victims in order to claim compensation is leading to widespread resentment. This is likely to become a thorn in SP’s flesh of SP in the days to come. The elders and the women have united against such fraudulent practices and are threatening a revolt of sorts if the culprits are not arrested.

Ankur of Kutba village lives in the Yash Sports Club hostel in Kakda where he undergoes sports training. Ankur was shocked to hear that his name had been included in the list of those who died in the riots. The coach at the sports club confirms that on 7 September, Ankur and other students were in the hostel but what is shocking is that his name is also there in the list of rioters and attackers! He also added that Irfan of Malakhpur and Ankur were learning kabaddi together when the riots took place.

When we reached the Kutba village to investigate the complaints of fraudulent enrolment of victims in the compensation list, angry villagers surrounded us and demanded that an impartial probe should be conducted to bring out the truth. Dharamveer’s son lives in Lohri and is preparing to join the army. Ikram’s son, Rajveer is employed in Delhi. Rambir’s son lives in Manglor’s Tithani. Mamchand’s son is studying B.Ed. in Muzaffarnagar. The villagers claim that children like Rajvir, who live, study or work outside and have not come to the village for months now, find their names in the riot victims list. The villagers and family members of these young people have promised to produce proof, if required, though they have demanded that those responsible for inflicting such atrocities on them should be sent to jail.

Similar resentment was felt in Hadoli village. The villagers complained that the police were picking on people randomly so much so that because of a mistake committed by a few the whole village was suffering. They warned that there is a limit to tolerance. Ravindra, the head of Kakda mentioned that police were talking about implicating people from the village, “the list hasn’t come out yet. If they falsely implicate people, the consequences won’t be good because the village has not seen even a single instance of violence. The village has already seen the death of two boys but we have put this behind us and are trying to ensure peace. If a false report is filed, the situation could go out of hand and the Government will be responsible for it.”

Groups of women protested saying that if people from the village were falsely implicated, then they along with their little children would go to jail. Ever since cases have been filed against 110 identified and 150 unidentified people, the anger has been building up. This group of women who had surrounded the CM during his visit have threatened to launch an agitation “if any motivated investigation is launched against innocent people, the results would prove disastrous.” Seema from the village says “if people in the village wanted to indulge in violence, then would even a single person have survived? We tried stopping every Muslim family, but they left on one pretext or the other. Yes, it is a fact that some external people attacked the convoys returning from the Mahapanchayat. They vandalized houses and indulged in violence but the villagers of Kutba did not have a hand in it.” (21 September 2013)

The following images are scanned extracts of various local and regional newspapers which have covered the Muzaffarnagar riots in detail.