The real truth about the Muzaffarnagar riots: Part 8 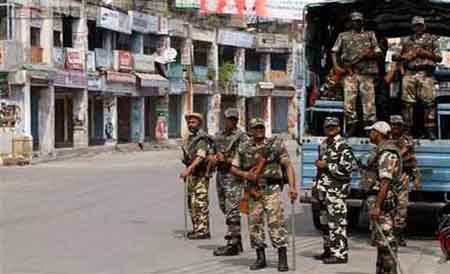 This is the Kawal village, Thana Jansat. In an incident today, three people were killed. Both the parties are levelling charges against each other. Cases will be filed on the basis of the arguments put forth. The bodies have been sent for post-mortem. A heavy police contingent has been deployed as an aftermath of the incident. We are doing a route march and will ensure that the incident is investigated as per process. We request people to maintain peace.

Reporter: What is the cause for the incident?
SSP: A girl was eve-teased. The brothers of the victim went to speak with the offender. The matter precipitated from that point onwards. When the girl’s brothers were returning after beating up the offender, people of the offender’s community attacked Sachin and Gaurav, the brothers. The matter is being investigated.  (Source: Spot report from the press conference)

My younger brother and someone who lives amongst all of you, Rashid Siddiqui is seated on the stage and all the corporators like him…if you wish, I want to make an offer…you do the job of telling me…I want to tell you elaborately that if that Mahapanchayat happens on the 31st I swear by Muzaffarnagar not one boy will escape.

Those who have always supported you, and continue to support you, I request you, I swear on Allah, please read the Namaz twice every day, read the Tazzu every day, be steadfast in the Sunna,  then nobody will be able to even touch one hair on your body. When you ask for a blessing with your soul…it will be given. (Source: Spot report from the speech)

Reporter (R): What is your name?
Adesh (A): Adesh Kumar

R: Which village are you from?
A: I’m from Jolly village.

R: Why did you have no opportunity to escape?
A: Because on one side, there was a canal and on the other side, there were these assailants.

R: So what was the situation like? Were gunshots fired?
A: There was firing for at least one hour.

R: Then?
A: I don’t know what happened after that…how many died and how many jumped in the canal to escape…I don’t know…

R: How many people, you think, were approximately killed?
A: There is no count of the number of the dead. No one knows how many died.

R: If one searches the canal, how many bodies would we find?
A: Five-six bodies have been recovered…we are looking for the rest.

R: Hmm…ok.
A: We recovered a dead body today from Silarpur.

R: And tractor?
A: The tractors are still lying in the canal.

R: Has any tractor been pulled out?
A: The tractors are still lying there. No one is taking them out.

R: It is being said that those who had attacked were equipped with modern firearms.
A: We learnt that AK 47 was amongst the weapons that were used. PAC has recovered shells of the firearms but they are trying to suppress this information.

R: What kind of a danger exists now?
A: We are worried that the day the security forces are removed from here, the incidents could repeat once more.

R: Why do you feel that way?
A: Because we saved some people. The fight may happen on why we saved those people.

R: That is when the police were available?
A: The PAC was there at that time but they did not offer any help. They didn’t even fire.

R: Fire?
A: Yes. They neither fired nor used their stick.

R: What did they (police) say?
A: The PAC said that they had no orders (from higher authority) and tried to evade the situation.

R: How did they save lives then?
A: Some people ran to save their lives. They ran left, right…some of them ran and hid in sugarcane fields. CO sahib himself said that many lives were saved…many people were recovered in an unconscious state from the sugarcane fields.

To be continued in the next part…