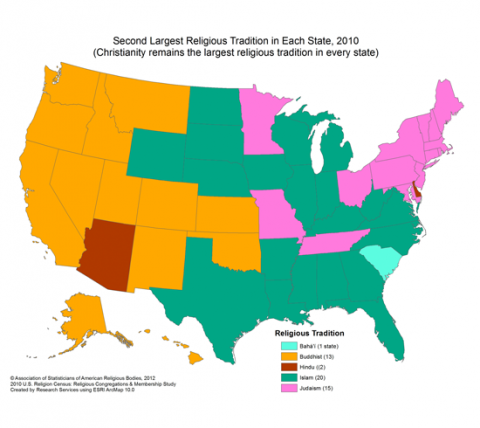 According to latest data available from the Association of Statisticians of American Religious Bodies- ASARB, are seeing an increase among the adherents of Dharmic faiths – that is Hinduism and Buddhism.

The most recent report of the ASARB claims that Hinduism has become the second-largest faith in Arizona and Delaware while Buddhism has acquired the same status in the states of Hawaii, Alaska, Washington, Oregon, California, Idaho, Montana, Nevada, Utah, Colorado, Kansas, and Oklahoma.

The growth of the Hindu populace in both Delaware and Arizona is said to be the result of the rise in the number of Indian immigrants, most of who are Hindus, as they are drawn by jobs in the fields of technology, finance and medicine. According to available Census data from Delaware, the number of Indian residents grew 116% between 2000 and 2010, making them the largest Asian group in the state. Similarly in Arizona the Asians remain  one of the fastest-growing groups.

Buddhism had been present in the United States for a longer period, the second half of the nineteenth century to be specific, when Chinese immigrants settled in Hawaii and California. This was followed up in the twentieth century by immigrants of other Asian nations like Japan, Korea, Thailand and most importantly Vietnam and Cambodia. Although the bulk of the present say Buddhists are descendants of those early immigrants there has also been arrival of a new generation of young Asians who, like their Indian counterparts, opt for professions in the realm technology and finance.

So far the Hindu-Buddhist residents have not caused any problems to the Christian majority and for a long time co-existed with them amicably. Hence there is no reason for the American public to be alarmist. But this new demography will definitely play a role in the upcoming elections for the U.S Senate and House of Representatives.

Back in 2008 as well as in 2012, many political analysts credited the victory of Barack Obama in the Presidential elections to the fact that large number of Asians who voted in favor of Obama and the Democrats.

This trend of Asians supporting Democrats is attributed to the long-standing image of the Republicans as the protectors of America’s Judeo-Christian values, which secured them considerable success only among the conservative Christian voters. But as the above data suggests, this increase in the number of Hindu-Buddhist residents happened in Republican controlled states and with such an increase, the GOP must restructure its image to that of an accommodating political entity, something the Asian immigrants view the Democrats as. On the other hand, the Democrats should not take the Asian vote for granted and should do all it can to retain them.

In the end both the political parties should remember the phrase ‘Demography is destiny’ as they gear up for the polling season at a later phase of the year.