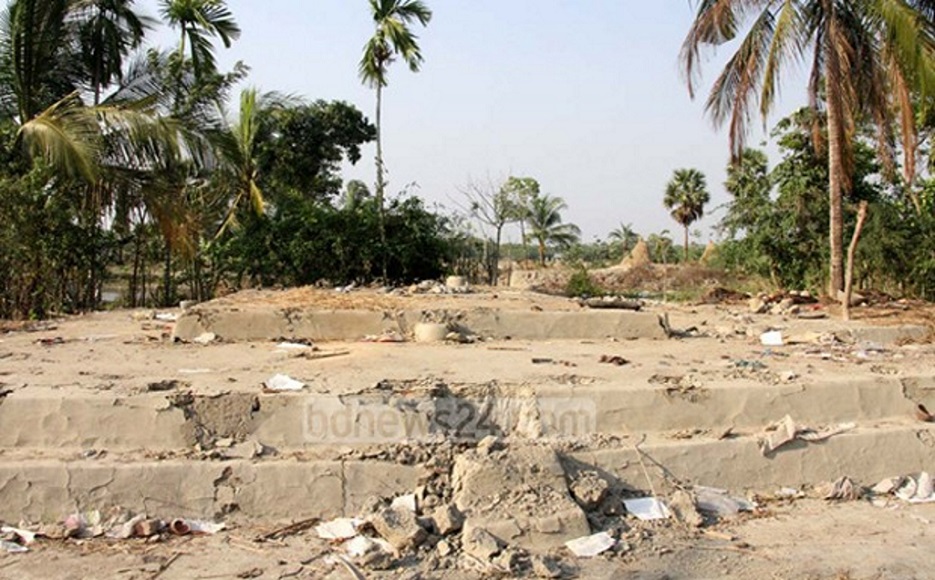 This was contributed by IndiaFacts reporter, Narayan Ukil from Bangladesh. Despite the arrest of an accused and repeated assurances by the district administration, the uprooted Hindus are unwilling to return to Taltoli in Barguna of Bangladesh

14 Hindu families of Maghapara area of Tulatuli Upazilla (sub district) under the Barguna District of Bangladesh left their houses and fled to an unknown location to save their life and the dignity of their women when local Muslim militants led by Zakir Hossain, the son of  the local UP chairman attacked them. When National and International media covered the news of the helpless Hindus, police arrested one Muslim militant. The civil society along with the Hindu community leader of the country protested against the silence of the administration over this persecution.

Local, national and international organisations put pressure on the government to take immediate action against culprits and to take initiative to resettle the Hindu families in their original homes. Today this reporter visited the village and also spoke to the administration. Local police, and District administration informed me that they are trying to assure the security of the Hindus who fled from the village in fear of continued threats and attacks on them by said Muslim miscreants.

On 21 March, 14 Hindu family fled from the village when two Hindu girls were raped by the gang leader Abdur Rashid, and the victims did not get any help and assistance from the police. But even as continued pressure is being put on the Bangladesh government for the incidents, police have continued to ignore the facts of the rape.

‘We are trying to bring them back to their hearth and homes,’ says Barguna Deputy Commissioner Mir Zahurul Islam.’If needed, we will build houses for them with government funds,’ he said.

But this has failed to reassure the uprooted Hindus who say the administration did not take cognizance of their complaints and the pressures that led to their exodus.Hindus had started fleeing from the Chandantola (locally known as Moghparha) village in Taltoli Upazila since 2013.

BNP leader Abdur Rashid Akan and one Awami Juba League leader Zakir Hossain Sarkar are said to be masterminding the campaign of intimidation to push the Hindus out of the village with the ulterior motive of capturing their lands. Assured by the administration, victim Yadav Sarker filed a case naming Rashid as the prime culprit and some other unidentified people on March 23.

Taltoli Police Station Officer In charge Mohammad Babul Akhter told the reporter of IndiaFacts that Rashid was arrested on the day of the filing of the case. ‘He has been sent to jail. We are investigating the matter with some urgency,’ he said. Rashid is also known as ‘Rashid Dakat’ (dacoit) in the neighborhood. He has been to jail several times in cases of robbery and assault on women. Zakir hails from the area but lives in Barguna town.

The district Juba League’s chief Kamrul Ahsan Moharaj admitted that Zakir is an activist of the organisation but has no position in any committee. Barguna’s Superintendent of Police Saiful Islam said he suspected some influential group was responsible for terrorizing the Hindus and added that every possible step would be taken to rehabilitate the Hindu families in their own lands. ‘Those responsible for intimidating them will face stern legal action,’ he added.

The district’s community police General Secretary Sukhranjan Sheel, a freedom fighter, said the people of the locality were working together wholeheartedly to rehabilitate the evicted Hindu families. The place where they lived was empty on Saturday. No house stood on the place where eight houses had been at one time. The flowerbeds remained uncared-for.

All of them say they are not in a position to live in that village again after the repression they have faced. They alleged their girls had to face regular sexual harassment. They said they had to withdraw cases against Rashid over his torture of women after being threatened by Zakir. ‘They intimidated us with sharp weapons and asked us to leave the area immediately,’ they said.

‘We went to the Awami League leaders but they failed to ensure our safety.’ They sold the houses and left the area, as they had no other option, they said. Panchakoralia Union Parishad Chairman Nazir Hossain Kalu Patwary said the locals formed a human-chain several days ago in protest against the activities of Rashid. He said he could not accept the way the Hindus left.

Taslima Begum, 40, of Chandantala village said some people led by Zakir, Abdus Salam and ‘Ilias’ tore down the houses and took the scrap away. ‘The Hindus were forced to sell the houses cheap,’ she said. Anwara Begum, 65, said no one could say anything because of fear. However, Juba League leader Zakir Hossain Sarkar rejected the charges brought up against him.

While speaking to IndiaFacts, he claimed that ‘Rashid is innocent. The Hindus have sold their homes and left on their own.’ But one of the villagers, Abdur Rashid Master said, ‘I can’t say everything. But I can say that those families had left everything behind with a heavy heart.’