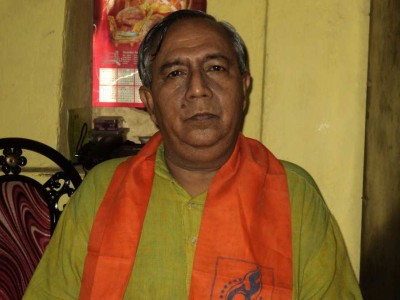 UPDATE: According to this tweet from Tapan Ghosh he is being taken to some undisclosed location.

Tapan Ghosh, President of Hindu Samhati (HS), a Hindu organisation working for the cause of Hindus in West Bengal  and  his two associates Asitava Bhowmik and Sujit Maity, have been arrested by Chanchal Police Station for reasons which are unclear.

The news came to light from an email received last night by IndiaFacts from Priyadarshi Dutta, a journalist. Here is the full text of Dutta’s email:

Shri Tapan Ghosh and Asitava Bhowmik of Hindu Samhati arrested by West Bengal police while conducting a private meeting with local Hindus under Chanchal (pronounced Chachol) Police Station, District Malda, West Bengal. It is suspected to be a preventive detention, in view Muharram tomorrow though the police is yet to specify the nature of detention. Shri Ghosh and Sri Bhowmik were on a tour of north Bengal. I just received a call from Shri Ghosh after they were detained. Malda is a frontier district with Muslim population suspected to have crossed 50 percent as per Census 2011 figures, yet undisclosed for religious demography.

Mr. Dutta’s email has also been confirmed by Upananda Brahmachari, Editor, Hindu Existence again, via email. Here is the full text of the email:

Police did not disclose the cause of arrest  and told me to call again after 10-15 minutes.

Friends, ask OC Chanchal the cause of arrest and tell the police for his immediate release.

It is a grave concern to crush Hindu Activities in West Bengal. Plz Act accordingly.”

It is now known from Sri Brahmachari that he rang up the police once again and a Police staff (Mr Asit Mondal from Chanchol Police Station) conveyed that he was unaware of the cause of arrest and only the IC of Chanchol PS could state the cause. IC of Chanchol PS was not present at the time of call.

Eventually, it came to light that Tapan Ghosh along with his two aides, Asitava Bhowmik and Sujit Maity were arrested at Chanchal, Malda only to appease Muslims just a day before the Muharram festival.

They have been arrested for not obtaining permission for holding a rally. However, the fact of the matter is that Sri Tapan and his associates were holding an interactive session with Hindu Samhati activists inside a private enclave and were not using any loudspeaker.

It is also reported that IC (Inspector-in-Charge) of Chanchal police station, Tulsidas Bhattacharya  misbehaved with them without any provocation.

Other IndiaFacts sources tell us that police have arrested Tapan Ghosh and his aides as a preventive measure! They were taken to Malda last night with Police escort after 10:30 pm for their release today.

Update as of 11-30 pm, 3 November: the Police kept all three leaders of Hindu Samhati in custody at the Chanchal Police Station all night. It is believed that the Police will produce them at Chanchal ACJM (Court) on 4 Nov 2014. The advocates on behalf of Hindu Samhati will move the bail petition.

Bikarna Naskar, one of the vice presidents of Hindu Samhati conveyed to HENB (Hindu Existence News Bureau) that there will be a protest Jam (path avrodh) in Central Kolkata at Moulali crossing at 1-00 pm onwards today.

Even as news of Tapan Ghosh’s arrest spread, the Internet, especially social media media world was outraged. The hashtag #FreeTapanDa went viral in no time last night. It continues to be one of the top trends on Twitter even as this report is being written.

The various police stations and officers in Malda were flooded with nonstop calls from outraged Hindus all over the world against the unprovoked arrest of Tapan Ghosh and his associates. A Twitter user also published an unconfirmed news that the DGP and the Malda police are in a state of panic because of these calls pouring in from all over the world.

When IndiaFacts team last counted, Malda police had received calls from these countries:

IndiaFacts’ commitment to combat all manner of distortions and attacks against Hindu society, traditions, values, and culture stands by Tapan Ghosh.

Here are some steps you can follow to ensure that Tapan Ghosh and his aides are freed by the police under Mamata Banerjee’s administration:

These are the numbers of various police personnel in the Malda jurisdiction:

Please call in large numbers. Please call repeatedly whether or not the phone is busy, and whether or not you get a response. Tell the police that you are calling to enquire about the reasons for Tapan Ghosh’s arrest.

Please visit Sri Derek O’Brien, Member of Parliament, TMC website at http://derek.in/index.aspx. At the top right hand corner of the website, you have an option to send an SMS to him. Please use that option, and send him an SMS with the following text: “PLEASE RELEASE SRI TAPAN GHOSH.”

You can either send the SMS anonymously or you can leave your contact details.

It is now well-known that West Bengal under Mamata Banerjee has turned both into a living nightmare for Hindus and a major centre for Jihad both from within and from without. The Burdwan blasts are the tip of the iceberg, and the seriousness with which the NIA is pursuing the investigation only confirms our worst fears.

Mamata Banerjee’s politics of appeasement has resulted in grave danger to the physical safety and security of Hindus in West Bengal.

In the interest of national security and integrity, and safety of Hindus, we need to take these small steps of ensuring that Tapan Ghosh and his associates return safely and brazen attempts like this should not be repeated.