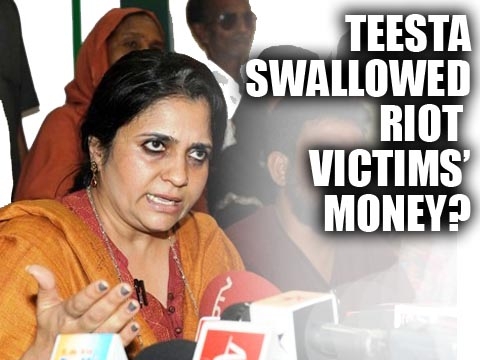 It seems after totally discrediting the noble cause of human rights by her lies, forgeries and mercenary pursuits, one of the most distrusted “human rights activist” in the country, Teesta Setalvad, has decided to wreak havoc in the realm of creative arts. Yesterday, on 22 August 2014,  she posted on Twitter a collage of morphed images in which the faces and attributes of Hindu gods and goddesses were superimposed on chilling photographs of the ISIS terrorists mercilessly executing their victims, with the caption of “Chilling Reality”.

There was an image of Goddess Kali, one of the most revered Hindu Goddesses, with the face of a terrorist, holding a severed, bleeding head. Another terrorist was shown standing in front of a rackful of severed heads, wielding the Sudarshan Chakra, a dharmic weapon of Lord Vishnu meant to eradicate evil forces.

The terrorist that posed with the slain photojournalist James Foley just before decapitating him was shown with a halo like a Hindu god. In the wake of the outrage and a slew of petitions and FIRs, Teesta Setalvad removed the offending tweet and the image. As an afterthought, she also published an “explanation” claiming that she wasn’t the one who created the image, and that it was sent by someone else – she simply, in haste, posted it on her timeline.

[pullquote]The avatar of Kali was incarnated to destroy evil, not to represent it.[/pullquote]

Knowing her track record, one isn’t even sure whether she actually tweeted the image “inadvertently” or she really meant to stir up controversy because–again, as her record shows, she has nothing better to do these days and she might perhaps be feeling sidelined. Teesta is known to have forged legal documents and spread an international web of lies during her relentless anti-Modi campaign in Gujarat: so how is one supposed to believe that the appearance of such an intentionally offensive photograph on Twitter was an unintentional mistake?  A fact of nature is the fact that nothing coming from the Islamist-Evangelical-Marxist-Leftist-Liberal-NGO network is unintentional.

Whether she herself created the offending collage or got someone else to make it for her isn’t really the issue. The issue is, what sort of “chilling reality” she saw in the image especially when inexplicable brutalities were being depicted through the images and the features of revered Hindu gods were being superimposed on them?

The avatar of Kali was incarnated to destroy evil, not to represent it.

The Chakra was used to slay Rakshasas and Asuras (demons/evil creatures), the very manifestations actually being represented by the ISIS terrorists, and was not meant to be wielded by an evil entity. Putting a halo behind a terrorist who is about to kill a bound victim actually means you see God’s image in it. If this is not diabolical in the extreme, what else is?

Even if we don’t subscribe to Hindu sentiments attached to these gods and godly symbols, from a scholarly/worldly point of view, doesn’t she even know what these gods and their symbols represent? Does she actually think that a parallel can be drawn between an Islamic State terrorist and Kali? Does she actually believe that the Sudarshan Chakra represents sweeping destruction and crushing human tragedy wrought by these terrorists?

In another statement, despite having apologised for “hurting religious sentiments,” Teesta Setalvad says that people should be open minded regarding such depictions in the name of artistic freedom. Artistic freedom surely is a sign of civilizational progress and nobody in his or her sane mind would disagree and ideally, there should also be freedom to offend.

But the reality is different: we don’t live in an ideal world, and two, in the name of artistic freedom, all these so-called artists, do is, run their own anti-Hindu campaigns. Why can’t their artistic freedom show the face of Prophet Mohammed on one of these terrorists?

Applying artistic freedom on something Muslim or Islamic is like hurling a pebble at a hornet’s nest – you will be stung beyond recognition and in most of the cases, killed (for example the Japanese translator of the book). Bookshops selling the book were bombed. The Danish cartoonist who showed Prophet Muhammad with bombs and missiles stacked in his turban was threatened and attacked relentlessly and finally he was found charred to death in his own bed. The filmmaker van Goh who depicted in his film how women are constantly targeted and brutalised in Islam was stabbed to death in broad daylight.  Taslima Nasreen was hounded out of her country and even in India it is still difficult for her to hold a public meeting without getting assaulted (and those who assault her are not even deemed as “extremists”)…such real life incidents are innumerable.

And so, the champions of freedom of expression, especially expressions that involve lampooning gods and goddesses of tolerant and inclusive religions like Hinduism clearly know where such freedom is applicable and where it is not. It is not implied that people of other religions should also show such extreme reactions. It’s just that, freedom of expression is quite malleable in this regard. But we’re not here talking about artists and other creative people: we’re specifically talking about people like Teesta Setalvad who have nothing to do with art and creativity– their sole agenda is to keep the cauldron of communal hatred and fear mongering brewing.

Giving a communal colour to such acts would be like playing in their hands. The best reaction would be no reaction but these are highly visible people with access to practically every communication and media channel. Their messages spread far and wide so the policy of no reaction would be self-defeating. It’s good that people are outraging on various platforms available on the Internet and forcing the mainstream media to take up the issue. The widespread outrage forced her to take down the tweet and even release a guarded apology. If people feel angry, they need to vent out their anger and it is good that people use social networking websites like Twitter and Facebook to do that. It’s better than burning shops and chasing people in the streets.