The real truth about the Muzaffarnagar riots: Part 1 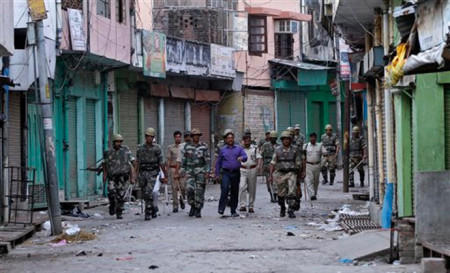 The Muzaffarnagar riots of September 2013 easily count as one of the worst instances of communal violence in recent memory. That they occurred in Uttar Pradesh, a state with a long history of, and continuing tensions between Hindus and Muslims should not come as a surprise.

However, as history shows us, the post-riot investigations in almost all such riots cases have largely been murky and politically motivated, and eventually, it is the truth that is buried. This is so even in the present case.

The report is entitled Evil Stalks the Land and is a study in deception. It primarily blames the RSS, a few local BJP leaders, and casts insinuations against Narendra Modi and Amit Shah. It contends that the riots were the culmination of the systemmatic efforts of the RSS, the BJP and several Hindu organizations who "spitted (sic) venom at the Muslims." In short, the ANHAD report tries to cover up for the actual people responsible for the riots. Equally, it also tries to brush the lapses of the Uttar Pradesh administration under the carpet by calling the riots a pre-planned conspiracy. Put another way, ANHAD’s prejudiced report tries to suppress the truth with a not so covert intent to malign the Hindu community. Indeed, on 26 March 2014, the Supreme Court itself has severely castigated the UP Government for its handling of the riots and the post riot situation.

However, IndiaFacts has managed to access a report that gives the exact picture of the Muzaffarnagar riots in detail, together with pictures shot on the spot. The authors of this report have visited all the riot-affected areas, have spoken to the people (including Government officials) there, studied the ANHAD report, Government reports and media reportage.

This is the first part of an ongoing series that brings out the truth of the Muzaffarnagar riots. Annexures will be provided after the concluding part of this report.

In the past year in Muzaffarnagar and surrounding districts, there have been repeated incidents of Muslim youth indulging in eve-teasing, molestation and rape of women and young girls.

• 23 August 2013: Five Muslim youth gang-raped a Class X student in Miranpur town (Muzaffarnagar district). Of the five, only Salman was taken in police custody. The rest are absconding.

• 24 Aug 2013: A Class IX student was raped by a youth named Dilshad in Muzaffarnagar.

These and similar other incidents were not quickly and adequately acted upon by the UP administration leading to a simmering anger on the part of the Hindus that eventually reached a flash point. But that is not all.

• 27 August 2013: Shahnawaz from Kawal village used to regularly eve-tease Yukti and Upasana (names changed) who were students hailing from the Jansath police jurisdiction in Muzaffarnagar district. Sachin and Gaurav, brothers of the aforementioned girls, went to speak with Shahnawaz about the eve-teasing and in the process, a scuffle ensued and Shahnawaz was injured. In retaliation, a group of Muslim youth including Kalwa, Nadeem and others beat up Sachin and Gaurav, both of who died on the spot. Senior Superintendent of Police (SSP) Manjul Saini and District Magistrate (DM) Surendra Saini reached the spot. Action was taken immediately and seven culprits were arrested. The police also recovered bloodstained clothes from neighbouring houses. However, the Government immediately transferred the SSP and the DM and released the culprits.

• 28 August 2013: An announcement is made to organize a condolence meeting to mourn the deaths of Sachin and Gaurav in the Nagla Madaud village.

• 30 August 2013: After the Friday prayers, a large crowd of Muslims gathered at the Shaheed Chowk outside a mosque. The BSP Member of Parliament Kadir Rana, ex-MP Syed Dujma, his son Salman Syed, BSP MLA Noor Salim Rana, Mirpur MLA Maulana Zameel, SP party secretary Rashid Siddiqui, Councillor Asad Jama, and ex-Councillor Naushad Quershi deliver inflammatory speeches against the Hindu community. Kadir Rana declared that “should the condolence meeting actually take place, not even a child should escape alive from there.” It is significant that the new SSP and the DM, Kaushal Raj Sharma were also present at this gathering. However, the information received through our team's RTI inquiry claims that the DM and SSP who were transferred earlier by the UP Government were present in that gathering! (See Annexure)

• 31 August 2013: In the condolence meeting (Panchayat) organized in Nagla Madaud, a demand is made that the murderers of Sachin and Gaurav should be arrested within seven days and that the FIR against Sachin’s family should be quashed. A decision was taken to reconvene the Panchayat on 7 September 2013 at Nagla Madaud.

• 7 September 2013: On their way back from the Panchayat at Nagla Madaud, unarmed farmers were brutally assaulted by Muslims at Purbaliyan, Jolly Nahar, Madeda and nearby places. In this attack, Hindus from the villages of Rahmatpur, Tejlaheda, Kakda, Soram, Baseda, Kakrala, Bhokrahdi, Chachrahuli-Baseda, Gadla, Nirgajni, Tevda, and Behda were seriously injured. Tractors, trolleys and motorbikes were burnt. This attack resulted in retaliation and sporadic instances of violence, and Muslim exodus was reported from villages such as Lisad, Laakh, Fugana, and Kutba. The army was called in and curfew was imposed in Muzaffarnagar. The following table shows the names of people dead in these incidents:

`• 8 September 2013: The report that the Honourable Governor of Uttar Pradesh sent to the Central Government held the State Government responsible for the riots. It also admitted administrative lapses (Amar Ujala, 9 September 2013).

• 10-11 September 2013: Instances of hand pumps being broken at the homes of Harpal Singh, Sanjeev, Jagdish, and others belonging to Fugna village were reported. Fugna borders on the Muslim-majority village of Loi.

• 4 October 2013: The farms of Rampal, Sanjeev, and Kashiram of Mandi village under Tiwati police jurisdiction were set on fire by unidentified people. 80 bighas of sugarcane was reduced to ashes.