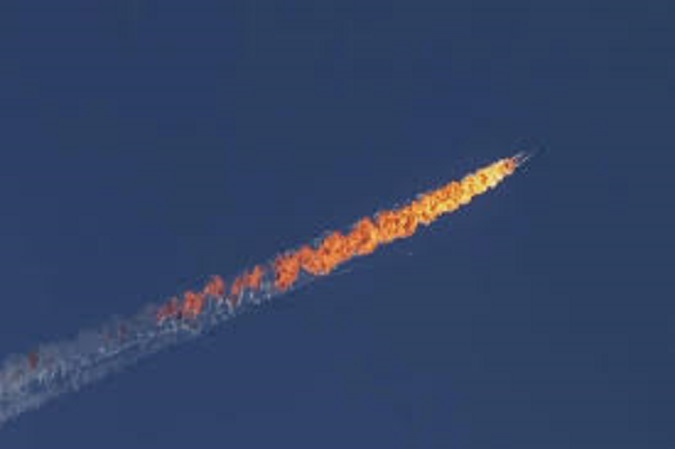 The downing of a Russian Su-24 by the Turkish Air Force is a reminder of the harsh reality of wars in the Middle East. Unlike the Vietnam or Korean Wars – when downed pilots could safely eject without fear of being shot at from the ground – the rules are different when you have opponents like the Islamic State and Turkey. In fact, the only rule is that there are no rules.

The death of the two Russian pilots who bailed out of their stricken aircraft is a tragedy that occurred because of Turkey’s stab in the back, as Russian President Vladimir Putin so correctly described it.

Unlike NATO aircraft that do not have to face an aerial opponent over Syria, the Russian Air Force has had to faceoff Turkish jets since the beginning of Russian airstrikes in October. Russian fighter pilots have to constantly watch their backs while targeting the Islamic State.

Why did the Turks do it?

Because Syria is a small country and modern jets are so fast, there is always a chance of Russian pilots intruding into the airspace of neighbouring states, even if for a few seconds. Incidents of intrusion happen regularly in Europe where Russian and NATO jets flit in and out of each other’s airspace without getting shot at.

The fact that the Turks drew first blood could be because of their frustration at the successes notched up the Russian campaign. Russian airstrikes have not only crippled the Islamic State and the US-backed terror groups, they have also effectively shown up Turkey’s impotence as a regional actor.

Alternatively, the Turks may have got the NATO high command’s tacit approval or encouragement for the act. While Moscow says the Su-24 was flying well within Syria’s borders, Ankara’s excuse is that the jet trespassed into Turkey. Even if the aircraft did enter Turkish air space, the inadvertent intrusion could not have lasted more than a few seconds. That the Turks took a shot at the Russian jet within a limited window means they were clearly waiting for such an opportunity – it was a cold blooded murder.

The Su-24 (NATO codename Fencer) is a purely ground attack aircraft. Designed during the 1970s to support Russian armour columns thundering into Europe, it has little or no air combat capabilities. In plain language it means the Fencer was not built to dogfight.

The question is why where there were no MiGs or Su-30s around to scare away the Turks on this occasion. On October 3 and 4, Turkey’s military admitted that as many as eight of its F-16 jets patrolling the Syrian border were “painted” by Russian jets. Perhaps the success of their airstrikes had led the Russians let down their guard.

The Fencer downing will give the Russian Air Force the impetus to include better top cover for their Su-24 and Su-25 ground attack jets. Russia should henceforth use the sledgehammer approach – saturate Syrian air space with dozens of Su-30 air dominance jets and despatch the S-400 air defence systems. The S-400’s scare factor alone will effectively neutralise the Turkish threat. At any rate, by upping the ante, Russia will send the message that it is not to be messed with.

When fighting Islamic terrorists or Muslim countries, failure is not an option because death by mutilation is a given. During the 1999 Kargil War, two Indian Air Force fighters who bailed out over the Indian state of Kashmir were tortured to death by their Pakistani Army captors. The bodies of the pilots were later recovered – with eyes gouged out and kneecaps broken.

In this backdrop, the Russian military needs to acquire better rescue and rescue capabilities. Sending one or two helicopters into a war zone festering with Islamic fighters, and where tribal loyalties overlap international boundaries, was not a wise decision.