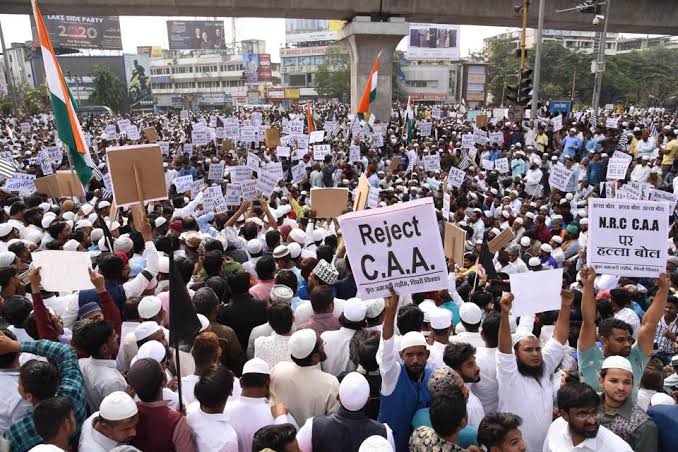 The world was shocked in the recent anti-CAA riots in India. The Act called Citizenship Amendment Act was passed by both the houses of the Parliament. It was ratified by the President. The government is in absolute majority and was chosen by the people for doing what they did. Tackling the problem of Bangladeshi illegal infiltrators was one of the poll promises of the BJP. One wonders why so much outrage and destruction on something which was done with all due process by a legally appointed government.

And what does the law enable? A faster and smoother granting of citizenship to the minority communities of Pakistan, Bangladesh and Afghanistan. All of these states are Shariat practicing Islamic states. The religious minorities in these countries, mostly Hindus, are undergoing a systematic genocide for decades and are on the brink of absolute extinction. This benign law which does not threaten any Indian Muslim and just empowers the victims of genocide was supposed to be welcomed by all as a humanitarian gesture of India.

Instead it generated violent rioting by radicalized Indian Muslims. And the riots quickly took a threatening anti-Hindu pose, racist and genocidal in nature. It shows that there is something deeply intolerant with radical Islam. While some universities which are disproportionately Islamic in nature like Jamia Milia Islamia of Delhi and Aligarh Muslim University of Aligarh led the riotous mobs in north India, most of the destruction of public property, most of the stone pelting and attempts at lynching of policemen were done by common Muslims of India. Property worth of thousands of crore was destroyed. Daily life was disrupted in more than ten states across India. Internet services had to be suspended and Section 144 had to be declared in some states.

From the very beginning the riots took an ugly racist turn, with Muslim rioters openly chanting Islamist and anti-Hindu slogans like “Hindutva teri Kabr khudegi”. [1] Odisha, with hardly two percent Muslim minorities saw openly racist slogans like “Hum le ke rahenge, azadi, in kaafiron se, azadi”. [2] Kaafir is an Islamist derogatory term for all non-Muslims who are to be hated, converted or slaughtered. ‘Allahu-akbar’ and the ‘Islamic Takbeer’ were again and again raised inside and outside the universities. Most sacred Hindu symbols were horrifically distorted to look like Nazi signs. [3]

Open hatred of everything Hindu was shown in these protests. Liberals often fume at the suggestion that modern Indian Muslims still identify with their ancestors, the medieval Islamic invaders. In the openly anti-Hindu slogans raised in the anti-CAA riots with a near genocidal intention aimed at Hindus, this suggestion does not seem too farfetched.

While India’s detractors, both national and international, routinely call it a fascist state, one wonders what kind of fascist state allows such wide scale riots and destruction of public property, along with every kind of abuse heaped up on not only the Prime Minister and the Home Minister, but the BJP, the RSS but the entire Hindu society.

This problem is not local. “Islam has bloody borders”, as Samuel Huntington famously said [4] and everywhere in the world, the Muslims have difficulty living with their non-Muslim neighbors, whether they are in majority or minority. The process of radical Islamization of every piece of land the Muslims inhabit goes on in a two-pronged strategy.

When in Majority: Genocide and Ethnic Cleansings

If the Muslims are in majority like in Egypt, Pakistan, or Bangladesh, they keep converting, killing and harassing their non-Muslim populations, citing conspiracy theories and suggesting disloyalty. In Egypt, the Coptic Christians are a peaceful minority of around ten to twelve percent. Even then, the Islamic majority feels threatened by it and there are regular Islamic terror attacks on the Christian minority of the country. [5]

The ongoing genocide of Hindus in Pakistan is an open case and need not be discussed here in detail. It will suffice to say that the Hindus are such second-class citizens in Pakistan that they are not even allowed to cremate their dead, and are instead forced to bury them like Muslims. Hindu girls are regularly kidnapped, gang raped and forcibly converted to Islam.

In Bangladesh, a silent genocide of Hindus is going on. Bangladesh had a huge Hindu minority just hundred years ago. In 1901, there were around 33.93% Hindus in Bangladesh, who have now been reduced to less than 8% in 2011. A quarter of the population of the country has been wiped out through forcible conversions and outright genocide and the world watches silently. There are numerous such cases all over the world where a Muslim majority is leading genocide of its non-Muslim populations.

When in Minority: Demand a Separate Islamic State

If the Muslims are in minority, like they are in India or Myanmar, they cite harassment by the majority and demand for a separate state. In 1947, in India, they got a separate state and are on the verge of demanding another in 21st century. In Kashmir, where the Muslims were in majority, they engaged in the genocide and ethnic cleansing of Kashmiri Hindus in the 1990s. Can any ‘persecuted minority’ attempt that? However, as soon as the valley was cleansed of Hindus by the majority Muslims, the narrative was changed overnight and Muslims started posing as the ‘persecuted minority’, hounded by the Indian State. In the rest of India, they keep playing this card and the states in which they are now fast becoming a majority, like in Kerala and West Bengal, their tactics are very aggressive.   And India is not alone.

Muslims are 4.3% in Myanmar, of which the Rohingyas constitute even less. Yet, they managed to destabilize an entire country. In August 2017, a Rohingya terrorist group launched 24 coordinated groups on Myanmar Army camps, leading in more than 80 dead.[6] One wonders, what kind of ‘most persecuted minority’ is capable of pulling 24 coordinated attacks against one of the most dreaded armies in the world?

And when the Myanmar army retaliated, the Rohingya Muslims fled to Bangladesh and India, destabilizing these countries too. But as if this was not enough, they also engaged in genocide of Hindus living in the region, killing more than 100 Hindus and dumping them in mass graves. [7] While the world demonizes Aung Saan Suu Kyi and racially profiles the whole country, these atrocities by Rohingya terrorist groups do not find even murmurs in the intellectual circles.

This is not an exception but a norm. In every single case, the Islamic side tries to localize the problem, often giving territorial, ethnic or legal hue to the problem overtly, and distracting attention from the fact that the Muslims have a trouble living with their non-Muslim neighbors globally, no matter where they live. However, they betray their intentions when they accuse the majority community of mistreating them on religious lines and claiming that Muslims are persecuted everywhere. It shows that the Islamic angle is never far from their mind.

The need of the hour is to understand that radical Islam is a global problem and the only thing local in it are the foot soldiers, the radicalized Muslims rioting on ground. Seen in this context, radical Islam will emerge as a totalitarian ideology and an aggressive and volatile global majority which ruthlessly persecutes its non-Muslim minorities leading to frequent genocides and ethnic cleansings. On the other hand, they cry wolf whenever they are in minority, aiming to carve out chunks of Dar-ul-Islam, a land cleansed of all non-Muslims. They want to dominate entire globe with this strategy.

The problem of radical Islam can only be seen in the global context. Viewing Muslims as local minorities is not only dangerous to the future of these countries but downright suicidal. Muslims are around 2 billion all over the world and have a lobby at the UN so powerful, with more than 50 Islamic countries that they can swing any public opinion to the benefit of radical Islam. Radical Islam can only be seen as an aggressive global majority, which has no internal mechanism of peaceful existence with non-Muslims. Only then, the solutions to this problem will begin to appear.

Common Muslims are often used as cannon fodder of the colonialist and expansionist plans of radical Islam. Some Indian historians say that the frequent rioting of Indian Muslims are leading India towards another Partition, calling it an unfinished agendas of the Muslim League, which lives on as IUML in Kerala but also in the attitude of radical Islamists all over India.

India is not the only unfinished agenda of radical Islam in the world. We will see that every Partition in the world in which radical Islam was involved, the problem was never solved and the non-Muslim country which came out of the Partition was once again on the verge of another Partition. In this series we will study some of these cases and their implications on world history in light of radical Islam and a global Muslim majority.

Though the first case should be India, but the issue is more than familiar to Indian readers and hence it will be skipped. The cases which will be discussed in this series are: Lebanon and Syria, Turkey and the Balkans, Spain and its minorities among others.