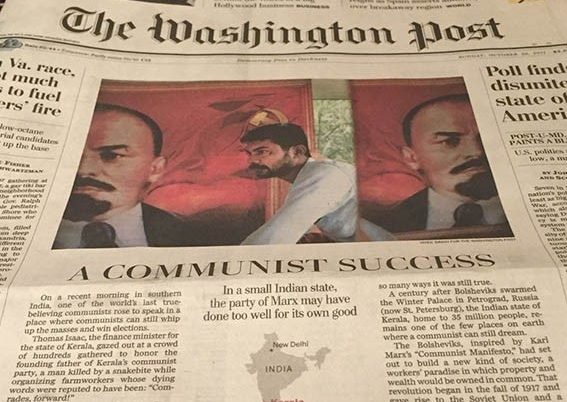 Even in this doom and gloom of Corona scare, as a Malayali, on 11th April 2020, my day had a very cheerful beginning. Ever since this Corona devastation started, the first thing I used to do once I wake up is to listen to the news which will be full of Corona-updates starting in the order of world numbers first, followed by national figures and then local state-level statistics. On 11th, apart from the news of Kerala’s Corona numbers showing a downward trend, there was one more thing which was the main reason for the cheerful start of the day. It was an article in the Washington Post showering praise on Kerala for its commendable achievement in combating Coronavirus in India.

As a Keralite as well as an Indian, it was indeed a matter of pride to see an international media house appreciating our efforts in a fight against a pandemic, a global disease.

Kerala well deserves this praise. Kerala has long been a front runner in the field of health care in the country like in the case of many other fields.

The reading of the article was progressing on the expected lines, and suddenly got stuck on a particular line. “In more than 30 years of Communist rule, the state has invested heavily in public education and universal health care.”  This was that line which triggered the alarm and aroused my curiosity which led to the further finding that the heading of the article also was edited from what it was originally. Initially the heading was, “India Kerala Coronavirus: How the communist state flattened its Coronavirus curve”. This was later changed to a more neutral looking “How the Indian state of Kerala flattened its Coronavirus curve”. That is, the wordings “communist state” was replaced with “Indian state of Kerala”! An afterthought of an over enthusiastic Commie sympathiser in the Washington post?! Lol! Of course yes, that was the case.

So, these two things out of the article were proof enough to show that it was no less than a leftist-communist propaganda material, for which Washington post was very notorious in its home country. It was for this very reason only that US president Donald Trump had cancelled the subscription of Washighton Post along with NewYork Times in the White House a few months ago. (ref: https://www.wsj.com/articles/trump-to-tell-federal-agencies-to-cut-new-york-times-washington-post-subscriptions-11571937831)

This was of course not the first time that the Washington Post is running a propaganda in favour of the Communist government of Kerala. Almost two years ago, they had done a front page story about Kerala’s Communist party and government, especially focusing on the very mediocre Finance Minister in the Kerala government.

One might wonder why a global publication giant of the stature of Washington Post would bother to run a propaganda piece for a faraway tiny bit of land on the globe. But we must bear in mind that it was in Kerala where the first ever democratically elected government came into rule during the heydays of communism. Even today when communism has been nearly wiped from the face of the earth, Kerala remains one of the few places having a democratically elected communist government. That is the reason for those who, like WP, still carry the sweet memories and hangover of a glorious communist era, doing propaganda for such small a place like Kerala.

As Trump correctly called ‘they are fake’, in this piece also we can see how they build their propaganda on fakery. If one sees the line “In more than 30 years of Communist rule, the state has invested heavily in public education and universal health care,” one who does not have much knowledge about Kerala would assume that Communists are ruling Kerala for 30 years and all the good that happened/is happening in Kerala are due to the good work done by the communists in that long 30 plus year rule of theirs.

But the real fact is the opposite. Kerala’s superior position today in many areas should be attributed to the fact that Kerala was lucky enough not be under a continuous rule of communists the way it was in West Bengal. Communists never ruled for more than one term i.e. 5 years continuously in Kerala.

As implied by WP in this article, if continuous rule of the communists was the reason for progress of any state in India then it would have been West Bengal which should be in the position of Kerala today. West Bengal is the state which was continuously ruled by communists for more than 30 years, not Kerala. And you see the result. Bengal is among the most backward states in India. The only ‘achievement’ of such a prolonged communist rule in Bengal was that today Bengali labourers are freely available in all states across India including Kerala. It was the poverty and joblessness in Bengal, a gift of the long communist rule, which caused the Bengali exodus from the state.

So, dear Washington Post, the ‘Deshabhimani of America’, as Keralites, while we take immense pride in seeing our state Kerala excelling in many fields compared to other states in India including the health-care sector, and while we proudly acknowledge that it was this superiority of our state in the medical field that is definitely one of the reasons of our pretty decent performance in containing the Coronavirus epidemic, please do not try to sell to us your dirty commie propaganda amidst this moment of crisis, as we the people of Kerala know who is who and who did what.