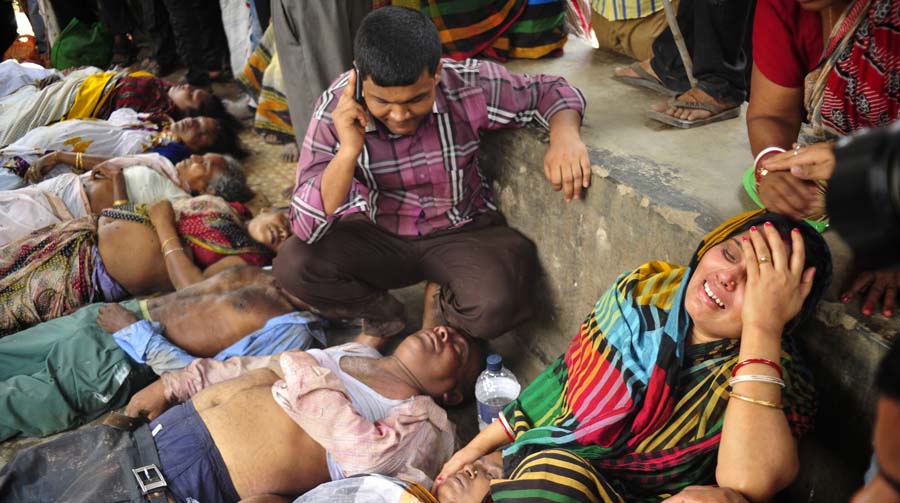 A rumor  of some unknown person about a collapsing bridge caused a stampede Friday morning during a Hindu bathing ritual in Bangladesh that left 10 people dead and at least 25 injured.

Police are investigating the incident and the origins of the bridge collapse rumor, but blame was already being cast on the local government for mismanagement and poor planning during an event that draws nearly a million pilgrims each year to holy site in Narayanganj, about 30 kilometers south of Dhaka.

The crowds had gathered for Ashtami Snan, an auspicious event for Hindus. Hindu devotees throng to the banks of the Brahmaputra River at the Langalbandh holy site in Narayanganj to bathe and wash away their sins. Pilgrims travel to Langalbandh from Nepal, India, and other countries across South Asia for the event.

An estimated crowd of at least 800,000 people began taking ritual dips in the water at around 5:45 am local time on Friday. The stampede occurred at around 8:30 am when the rumor began spreading that one of two Bailey Bridges — a type of portable, prefabricated, truss bridge — over the river had collapsed.

Mahit Uddin, the police superintendent in Narayanganj, told VICE News that the stampede occurred on a narrow stretch of road between the two bridges. According to local physicians, some people were trampled to death and some were killed from the pressure of the rushing crowd. Eight of the 10 fatalities were people over the age of 50. Seven of the dead were women.

Rajan Saha told the Bangladeshi publication New Age that he came to the ritual with his 50-year-old aunt, Kakon Bala Saha. “I found people rushing in different directions after hearing that a bridge had collapsed,” he said. “Later, I found the body of my aunt among the dead.”

Chhaya Rani, a pilgrim from Manikganj, a city near Dhaka, told the Bengali daily Prothom Alo that she suffered severe injuries to her right leg during the stampede. “During the rush, somebody pushed me from behind,” she said. “I fell down. As I could not move my leg, panicked people walked over me.” She said she was rescued by two of her relatives and a shopkeeper.

Witnesses have claimed the incident would not have occurred if the local administration and police had managed the crowd properly.

Hours after the incident, Narayanganj Deputy Commissioner Anisur Rahman Miah informed the local media that a three-member committee, led by a senior official of the local government, has been formed to investigate potential negligence by the local officials. The committee is expected to deliver their findings next week.

Narayangonj district administration paid  the family of each victim 25,000 Bangladeshi taka (about $325) for funeral expenses.

Locals claimed that a narrow road near a popular holy site on the riverbank is not wide enough to accommodate thousands of devotees who flock there annually.

Subrata Chowdhury, a member of the Bangladesh Hindu Buddhist Christian Unity Council, blamed the local government’s lack of preparedness for the stampede. He said the lack of planning was particularly evident when compared to preparations made for the Ijtema, an annual congregation of Muslims that takes place on the banks of the Turag River on the outskirts of Dhaka.

“The ritual has been a regular annual event for South Asia for hundreds of years,” Chowdhury said. “But we do not see the same kind of efforts taken by the local administration and government authorities to manage this event, as is taken during the Ijtema.”