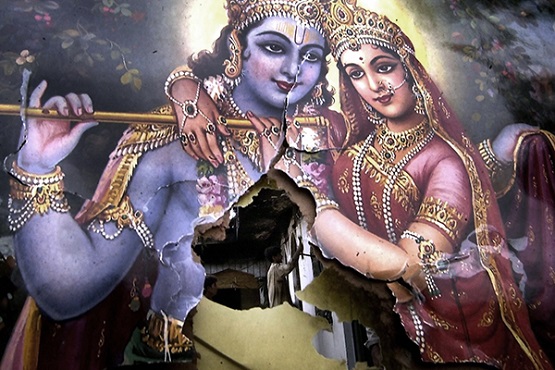 Report: Amid Holi celebrations, a bunch of students at the Sindh University (SU) were manhandled by private security guards after some teachers complained they were creating nuisance on the premises. According to associate professor and philosophy department chairperson Amar Sindhu, a couple of students came to her and complained that they have been roughed up. One of the boys had his shirt torn, she said.

Initially under the impression that the students were stopped from celebrating Holi, Sindhu called up the varsity’s security chief Ghulam Nabi Kaka. “He told me that they [guards] received a complaint from some teachers of the arts faculty that a few boys are creating nuisance in the faculty’s garden,” she told The Express Tribune. “He added that the guards went there to control the situation.

2. Activists of Hindu Forum stop ‘trick prayer’ and complain of covert Christian conversion through ‘allurement’ and ‘inducement’ in MP.

Report: A group of Activists belongin to the Hindu Jagran Manch (HJM), a right wing organisation, today protested  against a Christian prayer service at Kasba Jobat village in the Jobat region, alleging that people were being converted by ‘allurement’ and by ‘inducement’, police said.

‘HJM complained to the police that religious conversion through allurement was on at the prayer meeting. We are investigating the matter. On the other hand, no complaint from Emmanuel has reached us,” District Superintendent of Police (SP) Akilesh Jha told PTI.

Report: Unidentified persons hurled a bomb at the RSS office in Guruvayur on Tuesday night. No one was injured in the attack.

Report: Kannur, which continues to be strife ridden following the brutal attack on BJP leader CP Ranjith, witnessed the burning of the national flag by CPM marauders. The goons had earlier ravaged and destroyed the Seva Kendra initiated in memory of slain RSS leader Manoj, in the wee morning hours. The RSS Karyalaya at Chittariparambu has also been devastated by a gang of 50 Marxist assailants, immediately after unleashing terror in the area with a bomb attack.