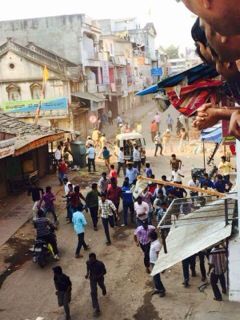 Report: A Hindu temple has been vandalized with hate message and swastika spray-painted on its wall in the state of Washington in the United States, the latest incident that has shocked the community ahead of the Maha Shivaratri festival. The incident happened when unidentified miscreants sprayed swastika and painted “Get Out” on one of the walls of the temple in the Seattle Metropolitan area. It is one of the largest Hindu temples in the entire North West.

2. One more BJP activist succumb to CPM terror in Kannur

Report: KK Rajan BJP activist of Upper Cheekkad, Koonthaloor, Udayagiri, suffered injuries as CPM thugs  pelted stones at the jeep in which he was returning home after attending the Janasakthi rally organised by the BJP in Payyanur on the ‘balidan diwas’ of K T Jayakrishnan Master. Unfortunately he could not survive the injuries.

3. Kerala can’t have any more Memorials as it hurts Islamic tenets

Report: Islamic fundamentalists in Kerala are opposing the construction of the memorials of famed poets Edasseri Nair and Madhavikutty since in their words “setting up an edifice in commemoration is against the tenets of their religion.” Members of the Sahithya Academy and eminent cultural leaders are said to be in stoic silence over the matter, for fear of rejection. Sources have indicated that the same set of fundamentalists who desecrated the bust of OV Vijayan is behind the fiasco of denying a memorial for Edasseri.

Report: Twenty eight Hindu families living in the Dasherkanda para area of Ranggabali upazila under Potuakhali District of Bangladesh are now living as slaves of Muslim militants and kept captive in their houses from the first week of February 2015. Muslim militants who are politically powerful in the said area restricted the entry of journalists, as a result of which the citizens of Bangladesh are totally ignorant about the situation.