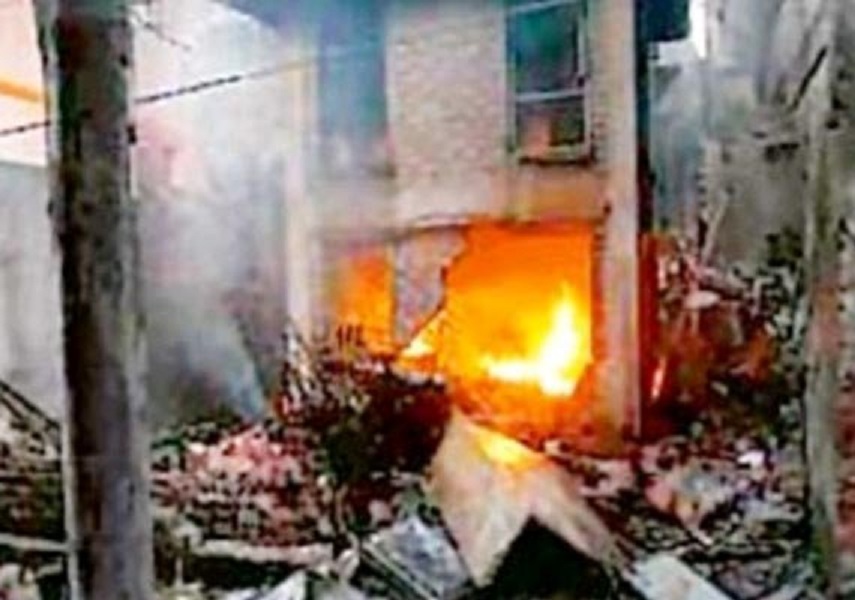 Both before and since Independence, Marxists viewed radical Islam as a natural ally in Indian subcontinent thereby nurturinga sense of hatredand alienation among the Muslims of Bengal. This propaganda benefitted them,which ultimately gave rise to radical Islamist politics. Boththe Marxist and militant Islamic politics worked together in justifying hate towardsmainstream society and politics.

Since 1977, the West Bengal government’s active support for illegal immigrants helped the Communists to subvert the electoral process and in the process, helped harvest a huge illegal vote bank covering for the deficit in governance and enabled the abuse of the Indian federal structure. Both Islamists and Marxists drew their strength from the same constituency– the elements who hatean assertive India.

British intelligence historian Christopher Andrew’s book The KGB and the Battle for the Third World (2005)is based on material in the Archive of KGB’s Major Vasili Mitrokhin. The archive exposed the Indian communists and provided evidence for the communist view of the Indian state.

No Indian should forget Marxists like former Chief Minister of West Bengal Jyoti Basu who always blamed India more than China for the 1962 war. Neither did the Communistsnor Islamistsever opposethe collaborative relations between China and Pakistanand their anti-India stance. However, they were opposed to Indians gaining strategic advantage by establishing diplomatic ties with Israel or collaboration with the West.

From being one of most industrialised states till the late 60s, West Bengal is now among the most backward. Close to 30,000 industrial enterprises had closed down and more than 27,000 units became ‘sick’.At least 13 out of the 18 major districts in the state are in the category of the 100 poorest districts of India.

West Bengal witnessed the exodus of middle class Bengalis out of the state for education, business and career prospects.The Marxists willfully reengineered the state’s demography by allowing illegal immigrants from Bangladesh and created vote banks.

Starting from the late 70s, the Jyoti Basu government openly encouraged the phenomenon of illegal migration from Bangladesh. This led to Islamic fundamentalism making strong inroads in the state.

Communist ideology and Islamic fundamentalism developed a symbiotic partnership and borders became incidental. In 1994, the Marxist historian, the late Professor Amalendu De wrote an insightful monograph Prasanga Anuprabesh (Essays on Infiltration) on the issue of infiltration in West Bengal and India from Bangladesh.

Amalendu De cautioned against allowing infiltration and warned that if it remained unchecked, it would only allow the growth of Islamic fundamentalism in West Bengal and would pose a serious threat to our national security.He exposed the Islamist – Communist axis.

Back in those days, the open but unwritten policy of the Marxist Government was, ‘death to those who opposed the Marxists.’

On 31 January1979,Jyoti Basu, the Chief Minister of the Marxist government of West Bengal gave orders to the police to open fire at MarichJhapi, a massacre in which 4,128 Hindu refugees from the erstwhile East Pakistan perished during the three-day police action starting on Saraswati Puja day. Chief minister Jyoti Basu also justified the butchery of 30 April 1982 when 16 monks and a nun of the Ananda Marg sect were set ablaze in south Kolkata by a mob of Marxist volunteers.

Buddhadeb Bhattacharjee had stated in the Assembly that between 1977 (when Communists came to power) and 1996, 28,000 political murders of political opponents were committed. By 2009, the total number of murders was 55,408.

The Marxists, in cahoots with the Jamaat-e-Islami started a vicious campaign against the establishment of diplomatic relations with Israel in 1992. The campaign took a more radical and violent turn in October 2001, soon after the US action in Afghanistan after the 9/11 attack against the US. In Kolkata,hysterical demonstrations were organised by the Communist government that witnessed vitriolic speeches and the presence of radical elements, all spreading the message of hate against nations combating terrorism.Kolkata saw protests by militant Islamist political groups sympathetic to Osama Bin laden.

The jihadist elements could find recruits and justify the actions thanks to the environment of hatred and alienation created by the Communists.The reason really was simple: the Marxists purposely created this hysteria in order to raise passions which would enable the complete consolidation of votes by politicizing Islam in all its virulent streaks.

This eventually nurtured an aggressive campaign in favour of radical and militant Islam. West Bengal became the epicentre of protests against the worldwide campaign against terror and the Indian policy for developing closer economic and military ties with the West.The opposition fromthe communists towards Indo-US nuclear deal and joint military exercises was an added advantage for these violent Islamist forces.

Communists gave militant Islam its space and justification for its acts of violence. On 22 January 2002, Islamic militants attacked an American cultural centre in Kolkata. Five people were killed (all Indian security personnel) and 20 other people were injured. Harkat-ul-Jihad al-Islami (HUJI) was responsible for the attack. A luminary of the group, Farhan Malik was responsible for the kidnapping and extortion of the Kolkata shoe baron Partha Paritam Roy Barman, who was later released after a ransom of ₹ 37.5 million.This set the stage for the rise of militant Islamic groups in West Bengal.

From merely allowing illegal immigration and ‘tactically’ supporting Islamists, the Marxists had now progressed to giving space and patronage to Islamic terrorists to develop their political and demographic ground in West Bengal.

In 2002, the then chief minister Buddhadeb Bhattacharya had openly declared that ‘the growing number of unregistered madrassas in the state posed a threat to national security and needed to be monitored and investigated’ but within 24 hours, he had to eat crow when his leader who controlled the state apparatus, the late Anil Biswas, publicly contradicted the chief minister and forced the CM to retract his pronouncement. The West Bengal administration was refusing to even let people discuss the issue concerning national security.This environment of radical Islam played a significant role in terrorism against India killing thousands of innocents. One of India’s Islamist terror group’s big players, Amir Reza Khan, an accused in the 2002 American Center attack, is a Kolkata resident. In the series of blasts across Mumbai, Jaipur, Delhi, Varanasi, the recruits from West Bengal played a key role.

Five years ago, Indian Mujahideen (IM) co-founder Yasin Bhatkal managed to get away from Kolkata due to lack of coordination by the state security agencies. Ammonium nitrate for the IEDs that killed 21 people in Varanasi in 2006 was bought from the Burrabazar wholesale market at Kolkata. The raw material for explosives at Pune’s German Bakery in 2010 was given to Bhatkal in Kolkata by an IM operative, who was a native of the border district of Nadia in the state. The administration was providing men, material and money for Harkat-ul-Jihad-i-Islami (HuJI) and Jamaat–ul-Mujahideen.

Jamaat-e-Islami is a major beneficiary of the Marxist policy of creating and nurturing the politics of majority vs minority always at the cost of the majority.Parochial politics based on regionalism and deal-making with militant Islamists sustained the communists in power.The same fundamentalist elements, who served as Communist vote-banks till the political tide turned against the Left, now began to support a party, which they perceived as even more indulgent to fundamentalism: their new facilitator, Mamata Banerjee, the first woman Chief Minister of West Bengal.