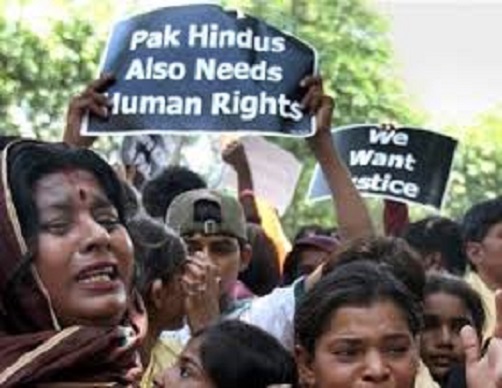 Report: Dr Ramesh Kumar Vankwani, a member of Pakistan’s National Assembly, informed the local media that Anjali, a 13-year-old Hindu girl, was kidnapped from her home in Dharki town of southern Sindh province. He further said that the kidnappers, including a person named “Siyal”, in connivance with a local politician, were keeping her in captivity at a madrasa, forcing her to abandon her religion.

Report: On 3 November, Tapan Kumar Ghosh, the President of Hindu Samhati, was arrested from a private household while attending a personal meeting in Chanchal area of Malda district along with his two aides, Sri Asitava Bhowmik & Sri Sujit Maity. Mr. Ghosh was detained all night in the Chanchal police station before being released the next morning. He was escorted by six vans of state police personnel and his supporters were stopped midway from meeting him, following which the Malda police took Mr Ghosh to a desolate place.

Social media sites like Facebook and Twitter were flooded with posts demanding the immediate release of Mr. Ghosh. Concerned police officials were flooded with calls from supporters of Hindu Samhati. Finally on 5 November, Mr. Ghosh and his associates were released.

Report: The Telangana Hindu Vahini have alleged that illegal missionary activities are taking place at Tirumala Tirupati Devasthanams (TTD) temples. Uppala Raju, state general secretary of the THV claimed that the officials at the temple are turning a blind eye to such activities taking place around the temple premises administered by the TTD: “Since the appointed people at the temple either have Communist ideology or are atheists and have no faith in Hinduism as such, they are not stopping the conversions.”

4.  Muslims gang-rape a minor Hindu girl in Tirthahalli: Massive cover up to protect the rapists

Report: Nandita Poojary, a fourteen year old girl became a victim of brutality at the hands of three Muslim goons. She was subjected to ghastly rape and murder. A local Kannada paper describes it as follows: “Nandita Poojary was akin to our little daughter. Three Muslim goons pounced on her like tiger upon a helpless prey, raped her and then murdered her.”

Report: What was supposed to be a convergence of faith in an inter-religious marriage turned tragic after the wife committed suicide. The husband Antony Joseph had allegedly tortured her as she insisted on worshipping Hindu gods.