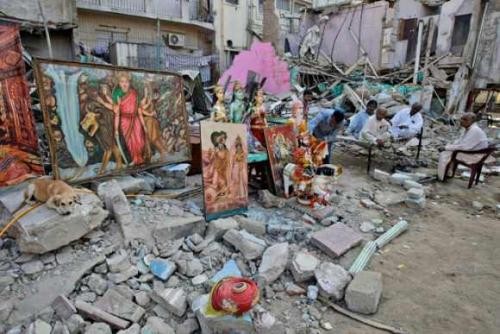 Report: Two women were killed and nearly two dozen others injured as Pakistan continued shelling civilian population on the Indian side along the international border and the Line of Control (LoC) in Jammu Kashmir since Tuesday night. Identifying both the deceased as Shanktla Devi and Bholi Devi of village Chilyari in Samba sector, sources said that while former died on the spot, the latter succumbed to her injuries at the hospital in Jammu.

Report: A group of Indian Islamic militants, operating out of Pakistan, has called for attacks on non Muslims in the region in retaliation for U.S.-led air strikes on fighters of the Islamic State in Iraq and Syria. “Kill the idol worshippers wherever you find them … shoot them if you can, stab them, throw stones at their heads, poison them, run them over, burn their fields – and if you are unable … spit in their faces,” said the head of the little-known Ansar al-Tawhid fi’Bilad al-Hind, referring to Hindus.

Report: The Bangladesh Land Ministry by its field offices has been complimenting the land grabbers by issuing circulars that violates the rights of minority Hindus which tantamount to uproot Bangladesh Hindus. Local land officials including Tahsildar in connivance of political goons are creating hurdles transferring the ancestral property to the Hindu owners.

Report: In the People’s Republic of Bangladesh during the festivities of Durga Puja widespread desecration and destruction of Durga’s idols are always carried out by ‘unidentifiable group of miscreants’. At least 21 incidents of the pre-Puja idol-breaking campaign have been reported this year.