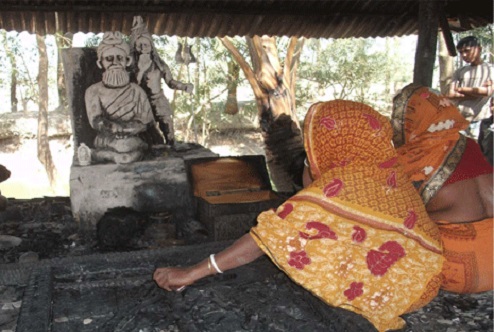 1. Over 150 Hindu Adivasi families have migrated to India

Report: Over one hundred fifty Hindu Adivasi families from different villages of Godagari upazilla of Rajshahi district of Bangladesh have migrated to India following persecution by Muslim in the last two years.

The Hindus had been the majority in at least a dozen of these villages since the days of the British Raj. But things changed as victims of river erosion in Chapainawabganj mostly Muslims, started settling in the villages a few years back. These Muslim settlers threatened the already -vulnerable Hindu Adivasi communities feel more insecure. Then there were BNP- Jamaat led attacks on Hindus in 2013 and early last year, especially after the war crimes verdict against Delwar Hossain Saydi of Jamaat-e-Islami.

As a response, the Hindu families in the Godagari villages have secretly left their ancestral homes for India, particularly to the districts of Murshidabad, Burdwan and Malda by crossing the border via brokers.

” This is not a country for us to live in ” said a frustrated Prosanta Murari of Shaipara village. His father Anonta Murari already went to India seven month ago and he is likely to leave anytime along with his brother and two sisters. Fourteen out of twenty two Hindu Munda families in Shaipara village, six out of eight Hindu families in new Shaipara village and nine out of thirty two families from village have left while the rest are bidding for their time.

Talking to this correspondent on 21 January, some Hindu Adivasis of Bottoli and Shaipara village said that the Muslim settlers do not allow them to play drums, intimidate them during rituals and often threaten to grab their land. They said, ‘Our females are living in fear of being raped and kidnapped by the Muslims.’

Sudeb Shaw, a Hindu resident of Bottoli village took this correspondent to the nearby Chhatrapukur area where the Hindus have long been using an abandoned spot to bury their dead. The Muslims recently set up  a make shift toilet on the graveyard and are also using the land as a temporary cow barn, Sudeb said, adding that haystacks were kept on the graves of his parents.

Narayan Murari, a freedom fighter of the 1971 independence war of Bangladesh said, there are graves of three Hindu War heroes at that specific site. This correspondent also observed the state of education in Hindu families. Saydur Rahaman, headmaster of the Bottoli government Primary school said that about 75 percent of his students were from Hindu families in 2009. Last year the number came down to only 41 out of 421 students. It is likely to decline further this year.

Chitta Ranjan Sardar, Convener of Barind Human Rights Defenders Foundation, said that the displacement of Hindus began in the 1980’s. After a decade’s interval, it started again in 2001 and rose after political unrest intensified in 2013. This correspondent also visited the different Hindu areas of Rajshahi division where the situation is same for Hindus. Many Hindu residents told this correspondent that they could not sleep at night. These Hindu residents also claimed that at times the Muslims forcefully take their corps from the fields, steal their cows and tease their female family members when they get the opportunity. They also said that these Muslims come to them and demand money and attack the male members when denied payment.

Report: A group of Muslim fundamentalists set ablaze a Hindu temple in the Agapadma village in Sadar upazila of Barguna district in Bangladesh on 20 January 2015. A portion of the temple was gutted in the fire, said Keshob Chandra Majhee, chairman of the temple management committee. Mr. Manjee said that he found the temple burning when he came out of his house adjacent to the temple around 12.30 am and cried for help. A case has been filed and the police have visited the spot.

Report:  Shibin a nineteen year old DYFI activist was hacked to death in a clash between the workers of the CPM and the Muslim League on the night of 22 January. Though Shibin was taken to Kozhikode Medical College, doctors were unable to save his life. The police seized the vehicle in which the assailants came. League activist, Ismail who was released after serving jail term under the Goonda Act is the first accused in the case. CPM district secretary P. Mohanan alleged that the murder was a planned move of the League.