Why do Indian Writers Love an Ugly India? 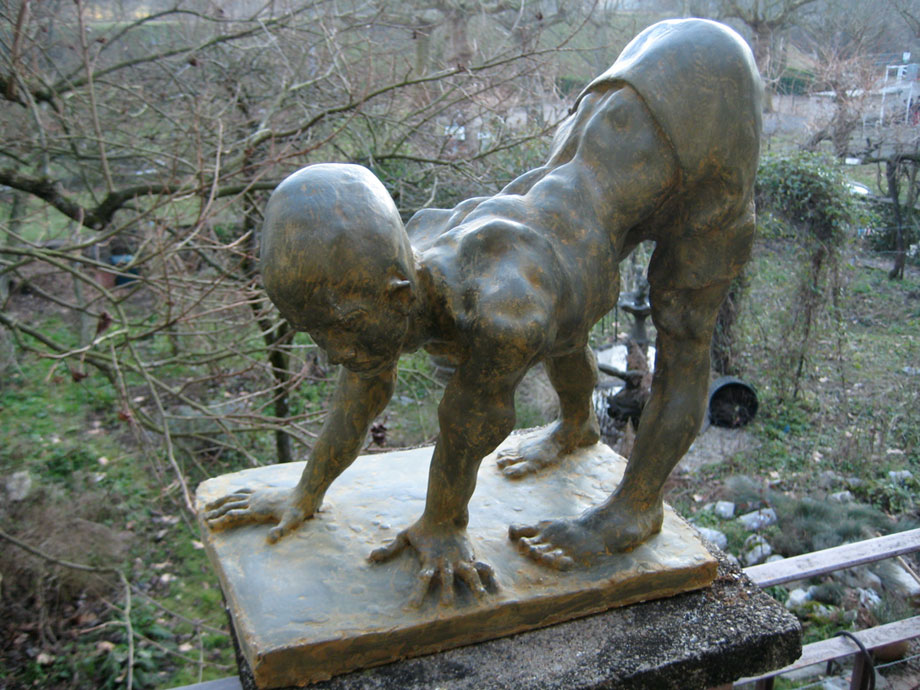 In pre-independence times, American author Katherine Mayo happened to visit India and wrote uncharitably about the country, particularly about the unhygienic surroundings in her book Mother India. When Mahatma Gandhi read it, he responded:

“…the impression it leaves on my mind is that it is the report of a drain inspector sent out with the one purpose of opening and examining the drains of the country to be reported upon, or to give a graphic description of the stench exuded by the opened drains. If Miss Mayo had confessed that she had come to India merely to open out and examine the drains of India, there would perhaps be little to complain about her compilation. But she declared her abominable and patently wrong conclusion with a certain amount of triumph: ‘the drains are India”. (Singh)

There is no doubt that India is still unknown to a vast segment of the world population even if internet is so easily accessible. It is quite believable that most of the people in the first world like to think of it as an exotic land of snake charmers, maharajahs, and cows on the roads. From Rudyard Kipling to E.M. Forster of England and from Jeanette Turner Hospital of Canada to the contemporary Australian Gregory David Roberts, writers have shown their bias against India.

But we talk of present times when things have undergone a sea-change and Indian authors for whom things have not moved a wee bit. What catches their eye in the name of realism is only ugliness in India. Think of Aravind Adiga, the writer of the award winning novel The White Tiger — a dystopic novel in which everything goes wrong. The protagonist is born in a poor family in a village and grows up to be a criminal who then changes identity and lives as a taxi service provider in Bengaluru. The India that Adiga describes is divided in the Land of Light and the Land of Darkness but it is the latter that is his focus of attention.

What he finds in the city are labourers defecating near a fashionable mall. In the countryside, the river Ganga only shows “faeces, straw, soggy parts of human bodies, buffalo carrion and seven different kinds of industrial acids” (15). The workers at tea stall are no better than animals: “…better to call them human spiders that go crawling in between and under the tables with rags in their hands, crushed humans in crushed uniforms, sluggish, unshaven,…” (51). This one seems a take on Indra Sinha, who, in his novel Animal’s People, presents the picture of a victim of Bhopal Gas Tragedy, who walks on all fours and survives on leftovers in dustbins.

The White Tiger talks of myriad problems like no electricity or drinking water, inadequate sewage, health, education and public transport systems, lack of discipline or law and order. There are politicians who are crooks and the rich who are lascivious. Joined by the common band of corruption, they loot the society unscrupulously. So, painted with same brush, the society here seems an abominable one and the protagonist comes to believe that a billion servants are secretly fantasizing about strangling their bosses!

Novelist Rohinton Mistry migrated to Canada some three decades back but his novels concern India. In Such a Long Journey, one comes across the underbelly of Mumbai (Bombay of the novel) – a congested, stinking area alongside Khodadad Building, which is the abode of the Parsi community. The building still is there, only it does not conform to the description that Mistry gives. Besides talking of open drains and children defecating in the open, Mistry describes a slum-like area with small shops, ill-stacked and spilling over the pavement like the bicycle repair shop, the paan-wallah, the electrical shop – all lined up in a disorderly manner along the potholed road – leading to the infamous House of Cages – a euphemism for the brothel. Gustad Noble, the protagonist, has to go through this area to reach Dr Paymaster’s clinic situated in this slum-like area, for his daughter’s treatment the expenses of which are met through the sale of his camera by this bank clerk.

We find “Crumbling, leaky warehouses and rickety – staired, wobbly — balconied tenements had been refurbished and upgraded from squalid and uninhabitable to squalid and temporarily habitable. The sewer – system, remained uncharged, broken and over flowing. Water supply continued to be a problem. So did rats, garbage and street lighting” (307).

In his second novel A Fine Balance, Mistry’s protagonist Dina Dalal, a single Parsi Woman sets out to find tailors for her boutique: “Day after day, she entered dilapidated buildings and shops, each one standing precariously like a house of battered cards. The tailors she saw in plenty– perched in constricted lofts, crouched inside kholis that looked like subterranean burrows, bent over in smelly cubicles, or cross legged on street corners, all engaged in a variety of tasks ranging from mattress covers to wedding outfits” (66).

The sight of people lining the railway track in the morning in an attempt to attend to nature’s call is almost a refrain in all these novels – something whose prototype was provided by Katherine Mayo. Mistry goes further and makes his characters cut scatological jokes. They talk of starting a shit-collection business as it is so freely available there: “Ready made lunches, tea-time snacks, hot and steaming” (206-07). Mistry seems to relish this description without thinking of the nausea that the readers might feel on reading such stuff.

In his zeal to focus on ugliness which, for him, has become synonymous with realism in literature, Mistry goes overboard and imagines the funeral procession of beggars – something that hardly occurs in India. The funeral procession proceeds at a snail’s pace because “the deformities of some had atrophied their bodies, reducing them to a froglike squat; they swung along using their arms as levers. A few could only manage the sideways shuffle of a crab. Others, doubled over, crawled forward on their hands and feet, their behinds raised in the air like camels’ humps” (494). Needless to say, the depiction of this revolting scenario appears “morbid”, “startling and unconventional” to readers. (Kapadia 133).

Author Indra Sinha takes up the infamous Bhopal gas tragedy in his novel Animal’s People. No doubt, the incident had a catastrophic proportion but in his zeal to sensationalize the narrative, Sinha creates a hunch-backed teenager who can only walk on all fours. So, he is called ‘animal’ and to satiate his hunger, he can chew his own skin: “I am reaching down to my heel, feeling for horny edges. I’m sliding the thumbnail under. There, see this lump of skin, hard as a pebble, how easily it breaks off, mmm, chewy as a nut!” (13). It seems a new aesthetics of ugliness is sought to be pushed into the nostrils of the readers!

All this would beg questions like: Is it being done to drum up the socialist/humanist credentials of authors? Or is it catering to the western readers craving for exotic narratives – an instance of Orientalism come again from our own people – and thereby ensure higher sale of the book?

The portrayal of ugliness in these Indian novels forces one to think if it is the case of what Lisa Lau and O.P. Dwivedi call “Re-Orientalism” in their book Re-Orientalism and Indian Writing in English. What the native writers, mostly based abroad or distinguished by their public school background and living in their ivory towers in India, seem to be doing is to look at the lesser mortals wallowing in sloth and despair with the colonial high-browed disdain and shed at best some crocodile tears forgetting what England looked like at the time of Industrial Revolution was much worse than this. And what she did to India and is best told by Shashi Tharoor in his well-cited speech at Oxford needs to be kept in mind. (News 18).

In this respect, it is hardly different from the stereotyped fiction that is produced by majority of westerners or the West-inspired Indians because such a work gives a kind of sadistic pleasure to the ex-colonizers who wish to be reassured that India remains backward, in sync with the Orient portrayed by the western writers. James Wood, writing in the New Yorker, commented thus on the Indian English author Amit Chaudhuri:

He has struggled, as an Indian novelist writing in English, with the long shadow of Salman Rushdie’s Booker-winning novel, Midnight’s Children (1981), and with the notion, established in part by the success of that book, that fictional writing about Indian life should be noisy, magical, hybrid, multivocally “exotic”—as busy as India itself.”

Such works have fair chances of winning international awards instituted in the West. The awarding of Man Booker to this novel in the year 2008 had raised eyebrows in some literary circles in India. What probably caught the eye of the jury was something that has been increasingly seen in the novels dealing with Indian themes written by the diasporic writers. Sir Simon Jenkins, the former chairman of the Booker prize jury, put it quite bluntly: “Indian writers in English face a peculiar problem – they write about India but their readership is mostly in other countries. Because of this paradox they create an image of India that is exotic and doesn’t show the real India. I worry about this. If people create an image of India on the basis of what they see in Bollywood movies, it would be a very odd India. That’s why a work of fiction can’t really create the true picture of India.”

But more than anything, in capturing only the ugliness and poverty without caring for the progress that has catapulted India into the league of fast progressing nations in the world, the Indian writer is creating a poor image of the country abroad. That probably explains the topic of a seminar at an international literary conference some time ago attended by the writer of these lines; which was — A Postcolonial Slum: India in the Global Literary Imaginary!