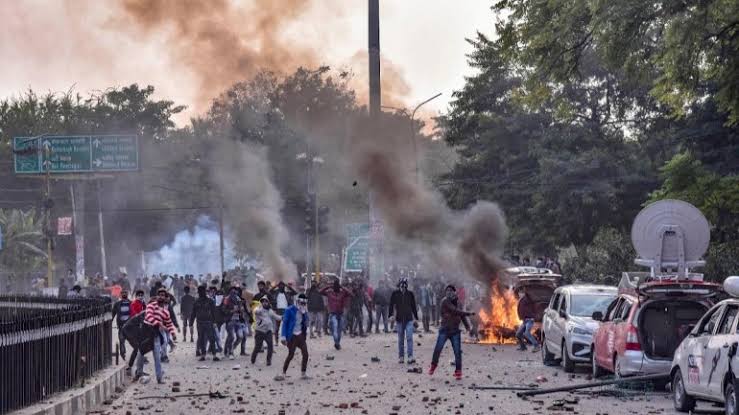 The nationwide outcry over the perfectly reasonable and measured legislative programme pertaining to the NRC and the CAA has revealed starkly what some already know. India has very few friends abroad and a significant number of Indian citizens, of all religious backgrounds, would be ready to betray it without a second thought. These are the people who will create internal disorder to distract India’s security apparatus, presumably on cue, should it face a dire challenge along its borders and find itself struggling. They are also, alarmingly, able to mobilise a not insignificant segment of the population, either paid or uninformed, to vent their rage against the government and authorities for grievances that may have nothing to do with the issue hand, as in the case of the CAA and NRC. Of course, the NRC hasn’t even been framed yet though rage is being vented over it, echoed maliciously by the Congress President with little grasp over issues affecting the country she had once remotely usurped with catastrophic consequences.

The ghastly Godhra killings were an earlier example of India’s internal enemies being mobilised by its adversaries. Pakistan sponsored murder and mayhem inside India by getting its assets within it to undertake an arson attack against the bogeys of the Sabarmati Express. It compromised India’s military mobilisation under operation Parakram, the reaction to the attempt to decapitate its entire national parliamentary leadership; a casus belli if there was ever one. More remarkable, in many respects, was Pakistan’s apparent ability to incite continuing protest in India against CM Modi for a whole decade, in an attempt to derail the career of someone who represented national renewal. One British-Indian university academic, handsomely funded by India’s MEA itself and host to senior officials of the ministry, wrote in the utterly partisan Financial Times, denouncing India’s ‘military adventurism and belligerence towards Pakistan’. He remains an honoured guest at India’s High Commission in London!

The ongoing violent protest highlights the graphic reality that few are willing to recognise and it is also unlikely to prompt the appropriate conclusions. Self-satisfaction, complacency and boundless confidence at India’s economic gains since the early 1990s will obscure the dark reality of its dire predicament. The attempt to clarify the basis of Indian citizenship and define its porous borders were immediately perceived as an assertion of its nationhood that was intolerable to a whole array of adversaries. They had long felt comfortable with a soft state whose vitals were being gradually being eaten away from within, as a prelude to a final denouement of the Indian Union. Domestic armed groups, in various guises, separatist regional movements and demographic transformation of its border regions, all with some degree of foreign involvement, was advancing towards the kind of crisis its myriad protagonists are now demonstrating in the streets of Indian cities.

This gradual dissolution of the India Union has been occurring on many fronts, undertaken by an alliance of the church and assorted Jihadis, who hope to settle with each other after the principal nuisance, the Hindu majority, has been disempowered. The models are the Northeast, West Bengal and Kerala. The Northeast states legally curtails the rights of Indians citizens, deemed outsiders, within its territory and humiliatingly refused to allow some ashes of the late Atal Behari Vajpayee to be immersed in a local river; a church sponsored monumental insult that was, as usual, swallowed without demur. Much of the region was originally gifted to the church by the ever-generous Jawaharlal Nehru, anxious to remain a beacon of hope and humanity in the eyes of the West. The West Bengal phenomenon is to intimidate the local Hindu population by ensuring the election of an outrageously partisan and thoroughly criminal political party. Of course, the backdrop to this outcome was more than a century of Anglicised mis-education that created a profoundly déraciné estrangement of Bengalis from the Indian mainstream, including their own greatest saints and thinkers. It was, in turn, followed by exposure to a particularly virulent Leftist mutant of the cancer that completed the goal of sowing utter confusion and institutionalised self-hatred. A further intermediate alternative for the quislings is to emplace a government that will do the bidding of church fathers and mullahs, as in Kerala, while local Hindus remain preoccupied with ancient jealousies.

These fissures within Indian society have long been known to seasoned foreign predators who have intervened on many levels to take advantage to further their nefarious plans to seize various pieces of sovereign Indian real estate. It is this conspiracy that the NRC and CAB appeared to challenge and constituted the final straw that broke the foreign camel’s back. The adversaries perceived an opportunity to strike, without having to watch and wait for Modi Sarkar’s demise for some other mundane reason, which is how Vajpayee’s NDA I perished because onions prices had increased. Such absurd priorities of the Hindu electorate amply explain why the people of India have been repeatedly subjected to prolonged subjugation by invaders. Following the departure of NDA-I, Indians replaced their perfectly decent government with robber barons who began accelerating the liquidation of the India Union through aggressive evangelist conversion, facilitating Jihadi incursions and the wrecking of the economy through plunder. Once the subsequent attempt was made by the NDA-2 to define who is an Indian and, as a corollary, India’s borders through the CAA, the criminal fraternity found the challenge to their nefarious goals, which had advanced precipitously under their foreign-born leader, intolerable.

All local assets controlled from abroad were swiftly activated, while a chorus of the foreign media engaged in a shrill cry of censure though without being able to substantiate what great wrongs had been committed. India academic specialists abroad, Western and of Indian-origin, its most insidious and venal enemies, joined the chorus to provide legitimacy for rioting and violence, effectively espousing the Jihadi war cry of ‘Islam in danger’. There can be no doubt that significant funds have been flowing into India in recent weeks to incite protest and finance dissenters. Few seem aware how widespread is the bribing of so-called journalists, activists and pseudo academics to serve the purposes of foreign adversaries of India. All it takes to avoid the perils of the hawala route is to use an international credit or debit card whose pre-set spending limit can be settled abroad. Recently, I met an Indian human rights and social activist who was being inexplicably funded on a tour by Britain’s major media dissimulator and fraudster. Another, who seemed perfectly trustworthy at first, turned out to be in the pay of industrialists and engaged in promoting their interests while feigning nationalist inclinations on the Internet.

A huge hole in the heart of the civilisation of Indica is the absence of an elite, with a steely cold and unsentimental cast of mind and intellectual prowess, willing to render service to it against destructive forces militating against its wellbeing and survival. On the contrary, a significant swathe of the country seems mired in parochial regional and other multifarious prejudices and loyalties that frequently guaranteed past defeats in the face of the most dangerous invading enemies. Again, and again too many of India’s people have chosen eventual desolation and enslavement over the rational inclination to cooperate with each other and, at least, postpone petty local squabbles when faced with an immediate common enemy. At this momentous time of national self-assertion and the defining of its basic identity as a people, a large number of the highly educated and extremely privileged Indians, across the globe, are shrieking aloud for the despoliation of the country. Such is the sickness of the soul they are not even bothering to seriously assess the veracity of the accusations that would supposedly justify India’s effective self-immolation.

The people and leaders of the Indian polity and non-existent intelligentsia class are also failing abysmally to tackle the near-universal hostile narrative about their nation that constantly calls for its demise. It seems clear from the choices of its leaders that they themselves don’t even understand the nature and scale of the problem, leave alone show the capacity to organise to combat it. The most tragic aspect of the situation is that some of the most vocal déraciné citizens of India, who are denouncing it, refuse to look to examples of how other nation’s actually control their own narrative and destiny. They decline any comment on China’s unforgiving demonstration how it can be done, without ceremony and with ruthless self-assertion. China has reasserted complete control over its own historical narrative, which flows from researchers in its own universities. Outsiders are excluded and denied access if they fail to toe the official line, which is, in fact, under the jurisdiction of the state authorities. A major sympathetic study of China notes the improbability of the widely held conviction in China that a park in China once adorned a notice forbidding the entry of dogs and Chinese, but hesitated to dismiss it though he found no evidence for what was likely to be an ‘urban legend’.

An accident of fate, though somewhat predictable in retrospect, has caught the nationalist government led by Narendra Modi in a trap. A whole multitude of those increasingly unsettled by a succession of political victories of the forces of national unity suddenly found an opportunity to launch a spiteful counterattack. Their fortuitous ability to motivate domestic unrest and the liberal inflow of foreign lucre to fund it has caught the government off guard. The decisive measures of the Modi government to defend the national interest by launching raids across the border, on the ground and from the air, in response to a series of the most outrageous assaults on India, from the repeated attacks on Mumbai, since 1993 to the attempt to decapitate India’s entire political leadership in 2001 and so many others, were being answered. They were followed by legislative changes on triple talaq that constituted a signal that egregious human rights violations would no longer be tolerated merely because they were asserted by a truculent minority, forever ready to threaten violence. Then, the tectonic historic verdicts on Ayodhya and heroic extension of the Indian Constitution, in all its magnificence, to Jammu and Kashmir. And followed subsequently by the enormously important CAA and the prospect of a nationwide NRC. The deeply compromised opposition parties, clearly connected to foreign adversaries in contemporary India and other local assets of foreign powers, have risen to the challenge.

India has entered the stage of a quasi-civil war. It is a blunt warning to the incumbent government that it will not be allowed to govern, regardless of the mandate promised in its election manifesto that it is seeking to implement. The scent of blood has prompted frenzy among the adversarial political piranhas and sharks while the poisonous black mambas and cobras of the media hiss in joy. It is now incumbent on as many Indians as possible to take to the streets, in a massive show of force to defend their government. This is the moment when selfless courage and readiness are required to make sacrifices to defend the Indian Constitution, the integrity of the nation and the civilisation of Indica against foreign foes and their assets within India. These are the so-called Left in criminal university networks of alleged students, their international allies, the evangelists and Jihadis. This is indeed the moment of truth and all self-respecting Indians must be determined to prevail, at any cost.