A year on, I thank my nation: Devyani Khobragade 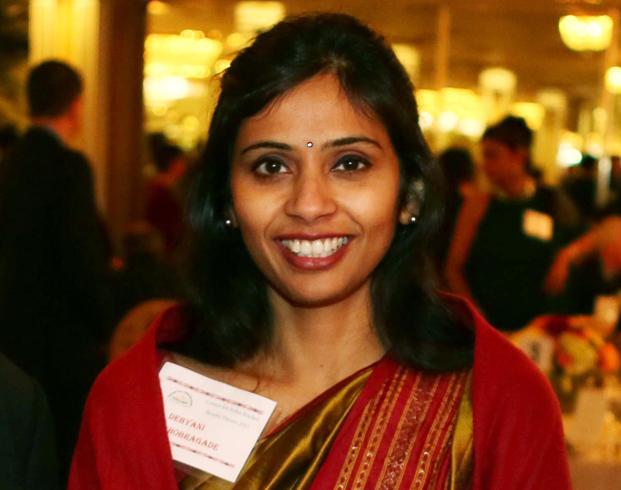 Today is a momentous day for me. Exactly one year has passed since I was illegally arrested and jailed in New York on completely false
charges brought in by my former Domestic assistant in order to get permanent residence in the US. This day last year turned out to be
historic for our country also. The illegal arrest and humiliating treatment of India‘s Acting Consul General in New York fuelled protests and anger throughout this proud nation, which endured for  nearly a month up till the moment of my home coming. The arrest united the Indian government, bureaucracy, civil society, and ordinary citizens, from elite to subaltern, in a manner which may perhaps have been unprecedented, with people across party lines and ideologies decrying it.  While now this incident  has become a small piece of history for diplomats, lawyers, international relations scholars and other academics to contemplate, for me personally it remains a life changing event in many respects.

This day last year triggered a chain of tense moments and a series of tough decisions, culminating in my return home after a month. Throughout that month, as I was holed up in my 24th floor apartment, I watched the world go by and followed my own life partly as an onlooker, as it was surreally narrated in headlines of Indian and international newspapers. It was not just the love of my family and the support of my brave colleagues that helped me with the myriad tough decisions that I had to take right up till the minute I boarded the flight to Delhi, but equally paramount was the surge of pride that I felt for my own country as it protested the treatment of its envoy.

I was not only proud of India’s response, but also profoundly in awe of it. As someone familiar with international relations and the dynamics of east-west power, I knew western opinion makers would spin this into accusations of Indian nationalism and jingoism. But the outrage was for the most part proportionate. While some people suspected that India’s response was orchestrated by the Foreign Service for its own institutional benefit, for me it seemed rather that it was spontaneous and autonomous, reflecting the emerging zeitgeist of our nation with a clear self image that demands the respect it deserves.

[pullquote]As someone familiar with international relations and the dynamics of east-west power, I knew western opinion makers would spin this into accusations of Indian nationalism and jingoism.[/pullquote]

In the one month following the arrest, while I found myself at the centre of a professional and political crisis between India and the US, with international and domestic press haunting me, I remained locked up in my apartment under virtual siege. I recall this period as being one of personal crisis also, under constant threat of being arrested again on trumped up charges of human trafficking. Thus I was also filled with anger and despair at the unfair and horrendous treatment that I had undergone, and the thought of not getting justice: at my human rights  having been violated; at being denied the privileges and immunities to which I was entitled under international law; at being used as an instrument by someone to realize her American dream.

Today, I find myself proud of having done the right thing for my country, and having done right by my colleagues by not accepting the
easy way out. I could have taken the offer of the US prosecutor to admit guilt in a closed courtroom only in front of a judge, and then to be completely free and suffer no consequences, not even a fine –this is the strange legal practise that the Americans call ‘plea bargaining’. This would have extracted me personally from this situation entirely, but what a precedent it would have set for all Indians working at their posts abroad! It would have inverted the fact that we held the moral high ground, that it was our sovereignty and rights that were violated, that we were the ones owed justice and recognition. And equally important, it would have made a mockery of the month-long protests undertaken by so many sectors of Indian polity and society, that had served to convey our nation’s pride and also to give me strength throughout.

[pullquote]Today, I find myself proud of having done the right thing for my country, and having done right by my colleagues by not accepting the
easy way out.[/pullquote]

But It was an incredibly tough year nevertheless, inaugurated by having to wait almost three months before my children — confused and traumatized by the inexplicable events — were able to join me in Delhi. Slowly, and especially lately, I have found myself more and more able to deal quite well with the anger, despair and helplessness that I had felt while holed up in my NY apartment. As I have begun to own this struggle to find justice for myself, I have learned to appreciate my own strength and confidence to deal with this adversity, to conduct myself with dignity under pressure, to speak up and ask for what is right, without fear of judgement and adverse consequences. I have also learned to accept and be grateful for the help that has come from unexpected quarters and unknown people with no return expectations. I have begun to learn how to slough off the emotional pain that derives from unfair criticism, both from known and unknown quarters alike, and to develop compassion for those who have betrayed my trust and confidence, and not taken responsibility for their part.

[pullquote]It would have inverted the fact that India held the moral high ground, that it was our sovereignty and rights that were violated, that we were the ones owed justice and recognition.[/pullquote]

My difficult decision to uphold this pride and these values and thus to speak out for what I believed was right — what we all believed was right — has translated into a newly-found strength. A year on, I find myself a stronger, deeper, more courageous and more forgiving person. For their actions a year ago and for these results a year along, I wish to salute and thank the people of my nation, and express my gratefulness to my colleagues in the IFS, and to my loving family, who put in all their strength to do the right thing — by me and by our country.

(Devyani Khobragade is an Indian Foreign Service Officer. The views expressed are her own and should not be taken as official views of the Government of India or that of IndiaFacts.)