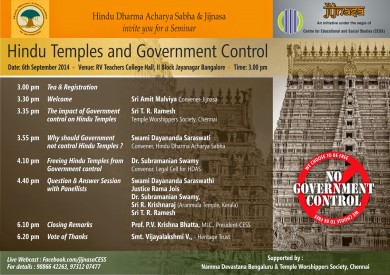 IndiaFacts is honoured to extend its support to the initiative of Jijnasa and the Hindu Dharma Acharya Sabha, who have jointly organized a seminar to address and discuss the urgent issue of freeing Hindu temples from Government control. The keynote address will be delivered by Dr. Subramanian Swamy. Sharing the stage will be Swamy Dayananda Saraswati of Arsha Vidya Gurukulam, along with other leading Acharyas from various Hindu Mathas. The seminar is titled, “Hindu Temples and Government Control.”

The following is the press note from Jijnasa. For more details, visit: http://jijnasa-live.blogspot.in/2014/09/jijnasa-6th-sept-hindu-temples-and-govt.html

The  seminar  will  discuss  several  issues  relating  to  Hindu  religious  temples,  institutions  and  the  detrimental  impact  of  government  control.

Why should a ‘secular’ government control any religious institutions?  And  why  should  it  control  only  Hindu  places  of  worship  and  not  those  of  other  non-­‐Hindu  denominations,  as  is  the  case  presently?

The  Hindu  society  often  rues  that  the  wealth  of  Hindu  temples  is  hostage  to  government  interference  and  corruption.  There  is  angst  over  inability  of  Hindu  institutions,  hobbled  by  government  interference,  to  invest  in  creating  knowledge  assets  –  digital,  physical  universities  and  new  schools  of  thought  with  the  potential  for  inter  generational  impact.

This  is  not  an  isolated  instance.  In  every  corner  of  the  country,  from  Tamil  Nadu  to  Kashmir  temple  managements  are  fighting  the  state  governments  from  being  taken  over  by  their  respective  endowments  department.  Chilkur  Balaji  temple  in  Hyderabad  is  an  example  where  the  hereditary  archaks  decided  to  embrace  the  hundi-­‐less  system  to  prevent  the  endowments  department  from  taking  over  the  temple  administration.

In  the  lengthy  judgment,  the  Supreme  Court  Bench  clearly  set  the  constitutional  parameters  on  the  scope  of  governmental  intervention  in  the  management  of  religious  institutions.  In  particular,  the  Court  opined  that  any  government  order  that  legally  mandates  a  takeover  of  a  temple  must  be  for  a  fixed  limited  period.

It  is  not  just  the  government  control  of  temple  administrations  that  is  an  issue  but  the  sheer  disregard  of  Hindu  traditions  at  the  hands  of  government  officials  along  with  colossal  corruption  that  is  now  forcing  an  enlightened  Hindu  society  to  demand  absolute  religious  freedom,  including  a  constitutional  right  to  administer  their  places  of  worship  and  religious  institutions.

The  seminar  is  also  an  attempt  to  revisit  the  larger  debate  on  how  Hindu  trusts  should  be  managed  sans  government  control,  and  to  determine  how  devotees  can  take  responsibility  towards  management  of  the  temples.  This  is  about  discussing  how  Hindu  trusts  can  be  made  transparent  and  accountable  to  the  Hindu  community.

Should  you  need  any  clarification,  please  contact  the  undersigned.