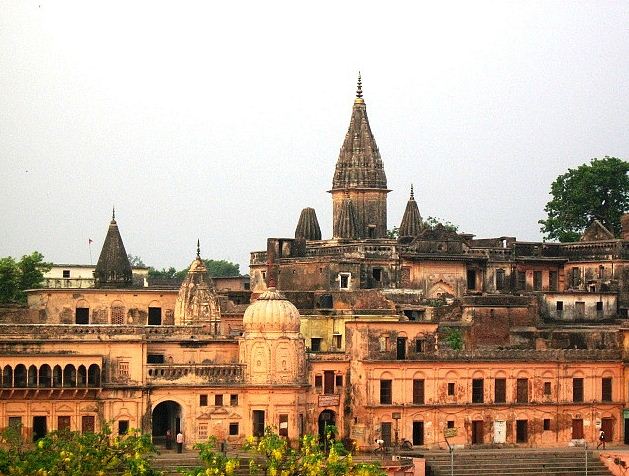 In the legal fight to reclaim the Ram Janmabhumi in Ayodhya, the discussion on Left Historians is a must. While the perception created is that the participation of these eminences was to add nuance to the subject, nothing is far from truth. When it comes to pushing and setting a narrative on Ram Janmabhumi, Jawahar Lal Nehru University (JNU), Aligarh Muslim University (AMU) and couple of other university professors, posing as historians, have played a large role. They appeared on behalf of the Babri Masjid Action Committee (BMAC) as experts, which in itself is not an issue by any means, nor is the fact that many of them are card carrying members of communist parties, but it is important to examine whether they have adhikara i.e. competency in this matter.

I would want to take this forward in two parts – first discuss the main arguments, pronouncements and testimonies of these Marxist Historians and archaeologists in this matter, and then highlight in second part the struggles and milestones achieved by the Historians on the Ram Janmabhumi side.

The stand of left historians had been driven by ideology from the start. The attacks and commentaries by them in publications, which went on to create the popular anti – Ram Janmabhumi mandir narrative were not based on evidence, facts or historicity, but on creating an emotional appeal for Babri masjid. The main arguments in almost all the writings by this cabal had more or less the following declarations:

As the case progressed, the positions kept on changing. The archeological artifacts, literary evidences and documentations kept them busy – partly in trying to refute the evidence, but largely in making a louder emotional case for national monument, which they thought is the solution in this case.

What was being evaded through the emotional appeal in national and international editorials was the central most important property rights issue: Did Babri Masjid replace a pre-existing Hindu temple?

Four eminent BMAC historians – R. S. Sharma, D.N. Jha, Suraj Bhan and Athar Ali – insisted that they be treated as independent historians, but the VHP team refused to agree to this demand. There were evidence exchanges (details and milestones of which we will discuss in the next part) but it helped little in shaking the determination of the proponents of Babri Masjid. The coterie kept repeating the same raga with little variation in op-eds. The gang had power and the establishment supported it. What the gang did not have was solid evidence on their side or the scholarship to refute the pro – Ram Janmabhumi evidences.

The court observed ‘lack of requirement to qualify (them) as expert’, ‘reckless and irresponsible statements’, ‘lack of proper investigation’ and ‘failure to inspire confidence’ etc. from their court testimonies. Counter questioning kept bursting the bubble of their knowledge and also refuted all false claims and opinions. Judgment from Honorable Justice Sudhir Agarwal is the longest – 21 volume – 5000 pages – and is a gold mine of interesting information. In this part, since the focus is on showcasing the humongous inadequacy and complete dishonesty of the Pro-Babri experts, nine surreal testimonies from the Waqf board brigade are offered as examples:

1. Suvira Jaiswal, Former Professor of JNU. She did her Ph.D. under R.S. Sharma.

In my knowledge, no such evidence is found which may indicate that Babri mosque was constructed after demolishing Sri Rama’s temple.

Whatever knowledge I gained with respect to disputed site, was on the basis on newspaper or what the others told, i.e., from the report of historians. By historians’ report I mean ‘Historians Report to Nation.’

2. S.C. Mishra, Satyawati College, Delhi University. He did his Ph.D. under D.N. Jha

“I have heard of Jaziya tax. At present I fail to recollect when and for what purpose it was levied. I do not remember that the Jaziya was levied only on Hindus.

It is wrong to say that Aurangzeb built the Gyanvapi mosque by demolishing half of the Kashi Vishwanath temple.”

“I have read many books written from the time of Babarnama to 1989, regarding construction of Babri mosque. I do not remember the name of any book right now.”

“I have done deep study about Babri mosque, after the beginning of this dispute… In my studies no evidence was found about the existence of any temple at this place.”

“In my view, to ascertain whether it is temple or mosque, it was not necessary to see the disputed site. I had historical literary evidence, on going through which, I reached the conclusion that this disputed structure was mosque or mosque was not constructed demolishing temple.”

“..I had deciphered the epigraph on the disputed site between 1975 and 1980… The study of those epigraphs was not necessary for my research.”

“During my studies I have not come across any such evidence or proof of medieval period to suggest that Babri mosque had been built by destroying any temple.”

“From the research carried out by me, I found no such evidence regarding this disputed site to suggest that this mosque had been built after demolishing temple.”

“Neither I can read nor write Persian. I can also not read Arabic… I have no sound knowledge of Sanskrit also. It is correct that my father-in-law (S.R. Farooqui) helped me a lot in reading and writing…”

“It was only after 1988 publication that my luck brightened… Became reader and was conferred Ph.D. degree, Sri Wahiuddin Malick was the Vice Chancellor of Allahabad University. It is also correct that, at that time the Chief Minister of Uttar Pradesh was Mulayam Singh Yadav.”

“…my wife is Mehar Afshan Farooqui.. I have adopted Islam religion at the time of my Nikah… I was given new name Sajid. Presently, I am neither a Hindu nor a Muslim… I made nomenclature of my children in Persian language.”

5. Suraj Bhan, Retd. Professor, Kurukshetra University. Sent report to ICHR, then headed by Prof. Irfan Habib on the disputed site. In 2003, he along with the other 3 BMAC historians and Irfan Habib questioned the objectivity of the ASI in its ability to conduct “rigorous, scientific and impartial excavations”.

“.. I did not try to know what is written in the Ramayana by Tulsi Das…”

“Nobody forbade me from observing the potteries in the pottery yard but no archaeologist was there to help me in my study.”

“I did not make any study of any recorded history with regard to the disputed subject.”

6. R. C. Thakran, Delhi University. He was a student of Suraj Bhan and also part of the coterie that attacked ASI in 2003

“I myself never did any excavation in any field… It will be wrong to say that I am not a field archaeologist; rather, I am just a table archaeologist … I have not studied in any particular book on this subject. I have not gained knowledge of it in any science laboratory too but I have this knowledge on the basis of my experience and study.”

7. D. Mandal, Retired Professor, Allahabad University. He is not a Ph.D. but many Ph.D. were awarded under him. He was a communist Party card holder and wrote book Ayodhya: Archaeology After Demolition, 1993 which is based chiefly on the photograph depicting excavation undertaken by Prof. BB Lal. Sketches used in the book were hypothetical, he told the court later.

I do not have any specific knowledge of history of Babur’s reign.

Whatsoever little knowledge I have about Babur is only that Babur was ruler of 16th century.”

“I have no knowledge that this square place was used as ‘Vedi’ of ‘Yagyashala’. In this behalf I would like to say that no archaeological evidence has been found about this place being the ‘vedi’ of ‘yagya’.”

“I neither know the meaning of ‘yagya’ nor of ‘vedi’.”

8. Ashok Dutta, Calcutta University. He was part of the eight member team of Waqf and Left Historians that questioned ASI capabilities in 2003.

“…As an archaeologist at least I have that amount of knowledge to differentiate between mosque and temple.”

“I don’t have any idea whether this type of stone slabs having decorative motif were used in the mosque or not.”

“As I have mentioned that the Muslim people do not believe in idol worship, hence there is no question of associating terracotta figurine with Muslim culture.

Makar Pranal is one part of Hindu temple architecture.

I am not very sure whether Makar Pranal has any association with mosque or not.”

9. Supriya Varma, Ph. D. from JNU. She had done her Ph.D. under Prof Shireen Ratnagar, JNU who in turn had written introduction to Prof. Mandal’s book.

I think very categorically it is very difficult to say that some of the finds of ASI relate to Hindu religious structures because these finds could well have been part of palaces, Buddhist structure, Jain structure and Islamic structure.”

“It is wrong to say that use of ‘Yaksh’ or ‘Yakshi’ is only limited to Hindu Dharmashastra. In fact, it is also associated with Buddhist religion.”

“I cannot say whether the word ‘Yaksh’ or ‘Yakshi’ is referred or mentioned in any religious book of Buddhism.”

These and several other testimonies which are in public domain, highlight how the cabal for their ideological agenda, tampered with history and tried to create a false narrative yet again. This is recorded in the history of our times as academicians pulling huge con with the religious, cultural sentiments and property rights of the Hindus. The attempt to manufacture consent was partially successful too, but the heroes from the Pro – Ram Janmabhumi side put a great fight, details of which, we will discuss in the next part.