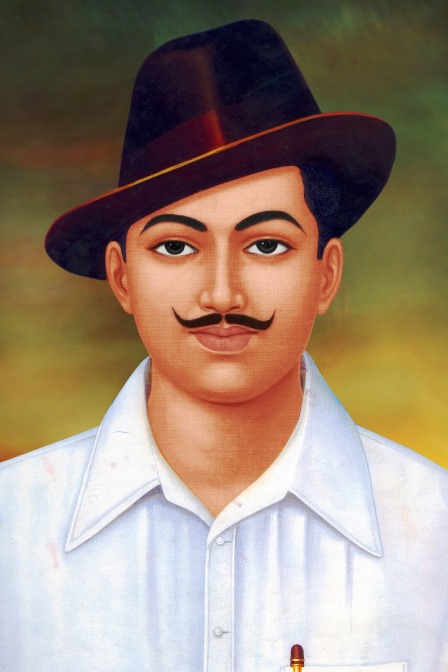 The revolutionary movement was an epic of bravery and self-sacrifice, and this deserves to be celebrated. Indians proved that they were willing to fight and would no longer put up with the ignominy of foreign rule. In that context, young Bhagat Singh, who was sought for his killing policeman John Saunders, committed his attack on the Central Assembly in 1929. However, here we want to focus on the lessons to be drawn from this experience, and therefore we will pay attention to the mistakes made.

At the time, the Congress leadership incarnated in Mahatma Gandhi condemned these violent acts in pursuit of a cause which was also his own, viz. freedom from British colonial rule. Congress president Madan Mohan Malaviya approached the British authorities for clemency to Bhagat Singh, which was not granted, but the movement’s official judgment of Bhagat Singh’s act was still negative. It was merely influenced a bit by the freedom fighter’s great popularity. So, at age 23, he was hanged.

Was Mahatma Gandhi’s criticism of Bhagat Singh and of the revolutionaries in general correct? For him, it was first of all a moral issue: freedom should not be won at the cost of British or Indian lives. If the opponent could be violent, we should show our moral superiority by not being violent. This position should not be taken as lightly as the critics of Gandhi (those of the left a well as those of the right) tend to do. He who fires the first bullet generally doesn’t know what kind of conflict he is letting himself in for. World War 1, the conflict by which everything was measured in those days, started with young men singing and carrying flowers in their rifles on the way to the front, but ended up becoming four years of miserable trench warfare, poison gas, and futile offensives resulting in mass death. But even if the quantity of violence can be contained, that first bullet still remains morally reprehensible. That killed policeman is likely just following orders, he has a grieving family too, and even if he is guilty he is not so to the extent that you have a right to execute the death penalty.

But to Gandhi, non-violence was not just a moral stance, it was also a strategy. By being non-violent, his activists would appeal to the colonial rulers’ conscience and thus convince them to vacate India. The Indian republic formally still upholds the myth that this Gandhian strategy of non-violence won India’s freedom. In fact, in the crucial years of World War 2 and its aftermath, Gandhi was politically paralyzed and his only campaign, the Quit India movement of August 1942, was a failure and anything but non-violent. Clement Attlee, the British Prime Minister during the transfer of power, testified later in an interview that Gandhi’s influence on the decision to decolonize had been “minimal”.

On the contrary, purely military factors had been decisive: the weakening of British power by the war and by its economic effects, and the creation of a large Indian army of which the loyalty had become doubtful. Whereas Gandhi had given a call for boycotting the incipient war effort, the business class massively made money out of the war production (after the US, India became the great economic victor of the war), and Mohammed Ali Jinnah’s Muslim League as well as Vinayak Damodar Savarkar’s Hindu Mahasabha called on Indian young men to join the army. This they did in their millions, and Indian troops were crucial for the Allied victories in North Africa, Iraq and Southeast Asia. During the war, many Indian soldiers in Axis captivity defected to Subhas Chandra Bose’s Azad Hind Fauz, and after the war, the Naval Mutiny had driven home to the British that their Indian troops would not obey their foreign masters in the event of a national revolution.

As a strategy, Gandhi’s non-violence was not much of a success. In South Africa, for instance, the African National Congress adopted it as their policy until the political position of the Blacks had deteriorated so much and the prospects for advancement so bleak that it founded an armed wing, the Umkhonto we Sizwe (Spear of the Nation). In India it was discredited further when Gandhi refused to use his ultimate pressure instrument, the fast unto death, against his second major opponent, the Muslim League, when it forced the Partition and the creation of Pakistan on an unwilling India. It has become a habit among Indians of all political persuasions to blame the British for the Partition, but in fact the British wanted none of the idea when Jinnah presented it to them. Only in 1947 did they start considering it inevitable — but so did the Congress leaders, including, by June 1947, the Mahatma himself. At any rate, it was the Muslim League that had been working overtime to push its Pakistan plan, which it had officially adopted in 1940.

It is only as a moral stand that Gandhian non-violence proved durable. As a strategy, it moved some individual minds but it did not shake the colonial power structure. But does this mean that Bhagat Singh’s strategy was better?

In the short run, it was an obvious failure as well. First of all, the Central Assembly was a symbol of the colonial dispensation, no doubt, but it was also an embodiment of India’s incipient democracy. Surely, the revolutionaries could have chosen a less ambiguous symbol of British rule. Secondly, the revolutionaries threatened the lives of individual British administrators and security personnel (which is why they preferred to deal with Gandhi and his non-violence) but not the colonial establishment. All they achieved was that they themselves ended up in jail or on the gallows. But if the movement had caught on, if political leaders had supported it, if foreign powers had provided weapons and safe havens, it could have worked. The British in India were very few, and it is said that the British Empire was based on bluff. There is no way the British could have held on in India if the revolutionary movement had grown from stray acts of terrorism to a coordinated and purposeful effort on a larger scale.

In the 1970s, as I remember vividly, our neighbour Germany was rocked by the abductions and bomb attacks of the Rote Armee Fraktion (RAF, Red Army Faction). When the first-generation leadership was in prison, the second generation committed abductions to force the authorities into setting them free. One of them, Horst Mahler (who later converted to the right), refused this forcible release. He was allowed to explain his motive on TV. While in prison, he had joined the Maoist party Kommunistische Partei Deutschlands (KPD), and said his party preferred organized mass revolution at the right time to the stray acts of terror of the RAF. He concluded with an optimistic: “Onwards, with the KPD!” This analysis was historically correct: when an anarchist managed to kill the Czar in 1881, he found that it was easy to kill an indidual czar but very difficult to dislodge the czarist power structure. Herbert Marcuse, the Marxist philosopher who had inspired the RAF, commented that acts of terrorism can be useful in a revolutionary situation, when the masses only need a trigger to join the action; but that, alas, what prevailed in Germany at that time was a counterrevolutionary situation.

Applying this to Bhagat Singh’s situation, we can say that the situation in India was by no means ripe. Stray acts of violence were like seeds falling on the rock, because the masses were not ready for violence, and because the political leadership had opted for another strategy. Gandhian non-violence may or may not have been the right choice, but it resonated with the Indian masses. It also formed a continuum with the strategy of the so-called moderates, reformers who sought to achieve big changes by using to the fullest the little steps that were possible within the system. These forces had prepared the ground for a different form of activism than the armed struggle of the revolutionaries.

Another shortcoming of the revolutionary movement was the lack of a consistent ideology. The first revolutionaries in Bengal, including Sri Aurobindo, were animated by an unfettered nationalism. It was for them that Savarkar translated the Italian nationalist Giuseppe Mazzini’s writings. To dissuade them from anarchic terrorism against British individuals, the authorities gave them Marxist literature in prison, because orthodox Marxism believes in mass violence once the revolution arrives, but not in stray acts of violence. The British would take care that the great revolution never came, and meanwhile the terrorists-turned-Marxists would remain physically harmless. That is how Bengal as the hotbed of revolutionary nationalism became the centre of Indian Marxism.
However, it would be wrong to see that British calculation as the only factor of Marx’ popularity in India. After the Bolshevik Revolution, many naïve but action-oriented youngsters the world over waxed enthusiastic over this new socialist utopia. The Punjabi student Bhagat Singh was likewise touched, and called himself a socialist. He spread the slogan “Inqilab zindabad” (Persian-Urdu: “long live the revolution”), which the Soviets had used to garner support among the Central-Asian Muslims against the Czar, a common target of the Muslims and the Bolsheviks. Bhagat Singh was executed, but his ideological preference went on to become independent India’s official economic policy. With the benefit of hindsight, contemporary Indians judge socialism one of their country’s most tragic failures. While Indians abroad were impressively successful as businessmen, India itself became proverbially poor under Jawaharlal Nehru and his successors. We can forgive young Bhagat Singh, he hadn’t thought about those matters and died too young to get much real-life experience. He is remembered not for his ideological excursions, only for his nationalist acts.

We may conclude that Bhagat Singh cannot serve as an example to be emulated by today’s Indians. His political-economic vision, still inarticulate, was to prove wrong. His strategy was not the best for his country at that time, though it deserved a more nuanced judgment than Gandhiji’s condemnation. His love of his nation, however, was genuine and heartfelt. His acts were morally ambiguous but undoubtedly patriotic and heroic. It is in that sense that Bhagat Singh must be remembered.