What the CAG report said about Leela Samson 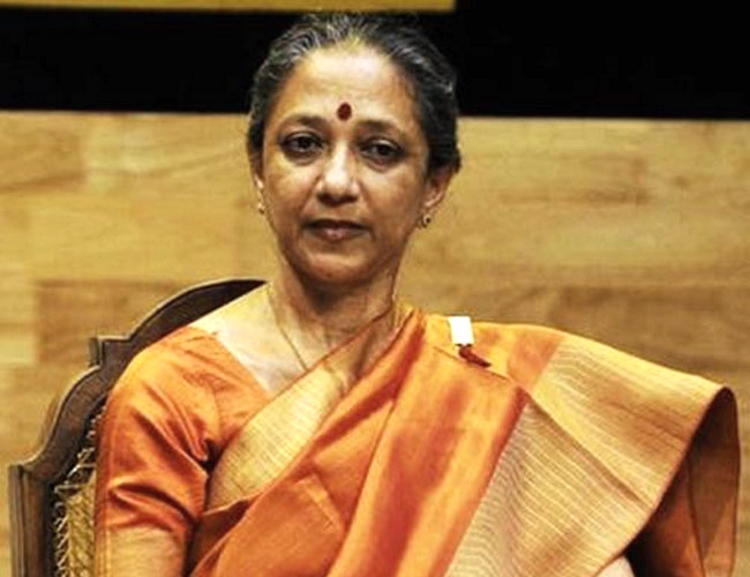 This Hindu news report mentions that Central Board of Film Certification (CBFC) chief Leela Samson has put in her papers on Thursday. To affix the “controversial” adjective to Leela Samson is to state the obvious.

Apart from being widely perceived as being close to Congress chief Sonia Gandhi, Leela Samson has also earned a reputation for being anti-Hindu. The most high-profile instance that showcased her antipathy towards Hinduism, Hindu Gods, traditions, arts, and ways of worship happens to be this pained response by Art of Living Guru Sri Sri Ravishankar in 2006. The 20 December 2006 issue of the Tamil Weekly Ananda Vikatan reports the incident:

“Can we separate Hindu religion & Bharathanaatyam” – when Sri Sri Ravishankar asked this question in a melodious sad voice we could feel how much his mind is wounded by the episode. For the ‘Health and Bliss’ religious course conducted by him in Chennai at Anna University Ground from 5th to 8th December 2006, the response was beyond compare.

We met Sri Sri Ravishankar…and discussed with him the said subject. ‘In the inaugural function 500 Bharathanaatyam dancers were to dance in group and it included 40 students of Kalakshethraa. Even though all the students were present for the rehearsal, the students were not allowed to participate in the function by its Director’, said Ravishankar.

The reason given for the non-participation of the students for the said function was very disturbing. ” This function is concerned with Hindu religion. So Kalakshetraa students need not participate in it”, said the present Christian Director Leela Samson who took over charge of the famous foundation of Bharathanaatyam and Classical music at Chennai, which has been in service for last 50 years.

“The lady right from the day of taking over as Director of this foundation has been spreading anti- Hindu views among the students. We should really appreciate the lady for her narrow mentality. Just as Christmas Carol songs and Pope can not be separated, Hindu religion and Bharathanatyam can not be separated. When this great art of Bharathanaatyam was aired in Samskar Channel for the world to view its greatness, non-participation of Kalakshtha students as per the orders of the Christian lady is only a loss to the foundation and not to the art” said Sri Sri Ravishankar.

[pullquote]During June 2010, Kalakshetra Foundation had made 16 appointments under 9 categories. These appointments were found to be irregular.[/pullquote]

A comprehensive list of allegations of Hindu-baiting by Leela Samson is available here. But perhaps nothing is more shameful than how she wantonly destroyed the hoary traditions of Bharatanatyam at Kalakshetra set by its founder Rukminidevi Arundale steeped in the loftiest spiritual and philosophical traditions of Hinduism and Bharata’s Natyashastra.

Massive corruption at Kalakshetra during her tenure

Apart from this cultural wrecking of the Kalakshetra, Leela Samson has also inflicted economic damage on it. The Hindu news report linked earlier merely mentions a CAG report which “alleges financial irregularities at Kalakshetra” in a line as a box item.

However what no media outlet has mentioned so far is the extent of and the brazen corruption that occurred at Kalakshetra during her tenure. A careful perusal of the CAG report, and replies to RTI queries filed by concerned citizens from the Office of the Principal Accountant General (Civil Audit)—available with IndiaFact—reveals stunning findings.

These findings can broadly be classified under the heads of financial irregularities, brazen lack of due process and nepotism during her long tenure as Director of Kalakshetra.

More fundamentally, legal experts that the IndiaFacts team spoke to question the validity of her appointment to the high post in the institution in 2005. This is centred on whether due process was followed in appointing her as Director. At the least:

Here is a fairly detailed opinion by a legal expert IndiaFacts spoke to:

According to the Recruitment Rules applicable to Director, a person has to be selected either on deputation basis or by Direct Recruitment with the prescribed educational qualification & other experiences or through DPC (Departmental Promotion Committee). If it is through DPC, a Search Committee will select the Director. DPC means internal candidates already working in Kalakshetra. Ms. Leela Samson an outsider till 2005 without any government experience, how she was selected under DPC is not yet known. According to Article 14 & 16 of the Constitution, all the eligible candidates throughout India should have been called for interview and the selection should have been done on merit.

In 2011, a Writ of Mandamus, WP No. 8282/2011 was filed in the Madras High Court against Kalakshetra alleging irregularities. Further, based on RTI replies obtained from the CAG’s regional office in Chennai, a clearer picture of the goings-on in Kalakshetra emerges.

The CAG’s reply dated 13 January 2012 is an extract from its 2011 audit report of Kalakshetra. Paragraph 7/IIA reads:

Further, the post of Assistant Professor has to be filled by promotion. However, the same had been filled up by Direct Recruitment which was not in order.  [Emphasis added]

The following is a representative list that gives a flavour of how recruitment rules were flouted at Kalakshetra under Leela Samson’s regime:

The last point worth elaborating.

On 20 January 2009, the Proceedings of the Selection Committee recommended the name of P.L. Banumurthy for appointment as the Foreman (Group C) to the Craft and Education Centre at Kalakshetra. The Stipulation in the Kalakshetra Recruitment Regulations, 2005 pegs the upper limit of the candidate’s age at 25 years and educational qualification at X class. P.L. Banumurthy’s age? 53 years and IX class pass.  One wonders what yardstick or definition of age relaxation the Selection Committee members applied to approve this appointment.

But we find another sample when we turn to the Proceedings of the Selection Committee convened on 21 January 2009. This time, it recommended A. Sakthivel’s appointment as “Driver Mechanic,” a Group C post. The qualification required per rules: upper age limit of 30 years, X Standard pass with a valid driver’s license for Heavy Motor Vehicles, five years of driving experience, and “should have good knowledge of vehicle maintenance and be able to attend to Minor repairs, etc” [THE GAZETTE OF INDIA: EXTRAORDINARY, PART II—SEC 3(i) published by Ministry OF LAW, JUSTICE AND COMPANY AFFAIRS on 4 January 1994]. A. Sakthivel’s actual age? 35 years and he obtained a HMV driving licence only a day before the interview (Pp: 20 of the RTI reply. Emphasis added).

Matters get more interesting when we examine the Kalakshetra Foundation’s letterhead related to recruitments in 2010. On 8 June 2010, on exactly one day, a record twelve appointments are made to various positions at Kalakshetra. More significantly, a common feature of all these appointments is the physical absence of the member Sriram Panchu in the Selection Committee. The names of all the three Committee members—Leela Samson, S.V. Venkateshaiah and Sriram Panchu—are printed on the Kalakshetra letterhead pertaining to the said appointment decision. However, in the absence of Sriram Panchu, the name of T.S. Murthi is included in handwriting and he is designated “co-opted member—C.A.O., K.F.” While this in itself doesn’t mean something is wrong, it is enough to raise suspicion given the number of appointments made on a single day.

The next item in the CAG’s RTI reply pertains to pervasive financial irregularities at Kalakshetra [Inspection Report on transaction audit for the year 2011. Report No. 28 — 76/2011-12].

Part I D of the report lists carries the Summary of Objections:

The report then goes on to record in painstaking detail the kind of financial irregularities under each head. A few excerpts will suffice to give a representative idea as to the nature of this corruption:

..it is clearly indicated that Kalakshetra Foundation had been procuring sound equipments and lighting equipments for Koothambalam theature since July 2010 onwards kept idle in stores and shown in the accounts as: work in progress. [Pp 14]

In the case of M/s Madhu Ambat Productions, two agreements were entered with it on the same day but only one agreement was brought to the notice of the Kalakshetra Board. But that’s the least of it. Here’s the truly damning detail that the CAG report uncovers:

The stamp papers No.E 768088 purchased on 03.09.2006 was from Madurai from a vendor without registration number and agreement was entered into on 25th October 2006. However the stamp paper No.A 227226 purchased from a registered vendor (No.44/17 80/B 3/96 MSK) purchased on 25.10.2006 was from Chennai for the agreement entered into with the same agency on the same date. The extraneous reason for purchase of stamp paper from Madurai for the contracts to be entered on the same date with the same agency with different witnesses may be elucidated to audit. [Pp 7. Emphasis added]

Of course, we don’t have information about whether Leela Samson or other worthies at Kalakshetra bothered to elucidate anything to the CAG. Nor did they offer any explanation as to the rationale behind selecting Madhu Ambat Productions without following due process. Again we can turn to the CAG report:

The Foundation did not explore the possibilities of finding experienced production houses in the field of making documentaries in the pretext that the work like this had to be exempted from routine tender procedures as these are “Specialised in nature”..it is to be pointed out it was the responsibility of the Kalakshetra to provide the troupe, the stage…necessary for enactment of the said dramas… M/s. Madhu Ambat Productions was handling only the technical side of filming… for which abundant talents were available in this field… therefore, it is not justified to term this work as “Specialised in nature” thereby deviating from all established procedures of tendering. [Pp 7. Emphasis added]

And so this deviation—a mild term really, for rampant corruption—becomes the norm as one reads page after page of the CAG report. Leela Samson’s favourites are awarded contracts and tenders to the tune of lakhs of rupees. Here are a few areas where tendering and other due process was either not followed or was flouted or subverted:

And so it goes, the CAG report, unearthing scam after scam in Kalakshetra, which was under Leela Samson’s thrall from 2005 to 2012.

When her term ended according to law, she didn’t quit gracefully. According to the law, her term would end when she turned 60, yet her clout with Sonia Gandhi got her the extension she sought. Finally, it took a PIL and a stay on her extension by the Madras High Court for her to step down.

As a tailpiece, Leela Samson had to offer an unconditional apology to the Madras High Court in 2011 for violating the court’s previous order restraining her from making illegal extensions to the Kootrambalam Auditorium. Neither was this just a case of violation of court orders. She had even violated the Chennai Corporation’s Stop Work Order with respect to the said illegal construction:

…the Public Information Officer of the Corporation has issued a letter dated 11.1.2011 informing that the Corporation has not given any planning permission to the respondent for the said construction and already stop work notice and demolition notice dated 20.9.2010  and 14.12.2010 respectively  have also been issued, providing copies of the said notices to the petitioners.

And when the court pulled her up for contempt, here’s how she responded:

I apologise to the court for any infraction of the above mentioned order.  I am a law abiding citizen and the Kalakshetra Foundation is an institute of national importance governed by an act of Parliament.  Any infraction of the order can only be attributed to inadvertence and I apologise for the same.  I categorically state that the disobedience was neither wilful nor deliberate.”

The whole judgment is available here.