How a chaiwallah enabled a Kutch villager’s vision for India 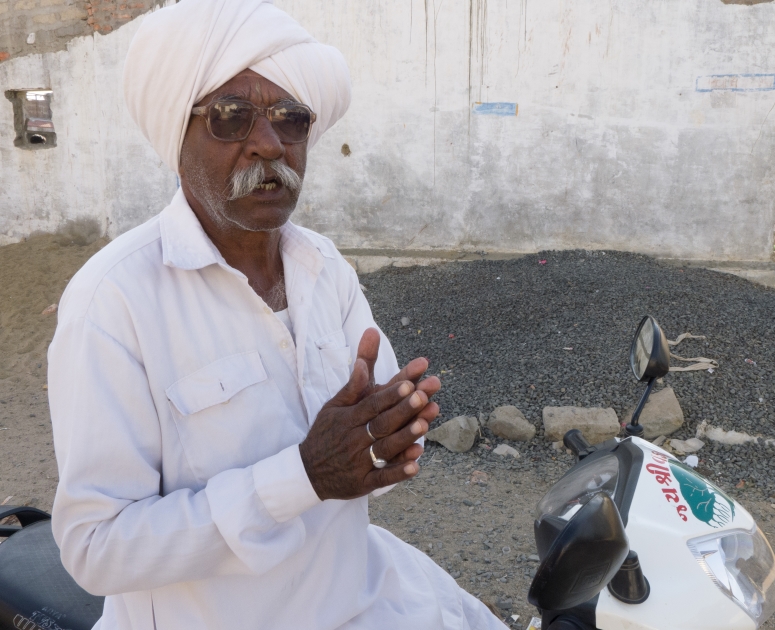 On our return from the Safed Rann (White Desert) back to Ahmedabad, we stopped by at Dhaaneti, an ordinary Kutchhi village off the Bhuj-Bhachau highway, made up of a few hundred well maintained homes set in narrow streets, a school, several small temples, and surrounded by grain and cotton fields. The cool winter morning seemed like any other: kids ambling to school, old men sitting on the temple steps after worship, loitering cows, and brightly clad women going about their daily chores within the short-walled courtyards.

Mr Valjibhai, an august gent in his late 60’s, neatly attired and riding a white scooter, bid us “Jai Shree Krishna” and stopped for a chat.

Now that the elections are over, the people have decided, and the stink from the flatulent mainstream wallahs about “Bharatiyata”, sham secularism, and their delusional canvassing for dysfunctional “heroes” like Arvind Kejriwal has somewhat abated, I reflected on my meeting with Valjibhai. It seems to me that the inane trumpeting of the chattering classes on TV and the English language press seemed to have blinded the usual suspects so much that they could not see or hear, much less feel the pulse of India. Perhaps, it was too much hassle to go out of air conditioned studios to notice?

Recollecting the passion, wisdom and above all else, the optimism and warmth I experienced from my interaction that cool morning with an ordinary village Indian, I feel that I, an infrequent visitor to the land of my fathers, through a chance meeting with a stranger, was fortunate to peek into the soul of India – a soul that the media has long ignored and whose existence they frantically seek to deny. A soul whose time has come to be free from shackles, a soul that has always known it roots yet has just found wings. A soul embodied in over a billion human beings.

When we met, Valjibhai had immediately remarked “You look like a patrakaar (writer)”. OK, so I occasionally put something up on the web, but I do not do it for a living. Sensing something special, and though I do not usually do this, that morning after we’d said our goodbyes, I made notes culling points that this simple village gent expressed.

“They say the world is progressing but sometimes it feels like it’s going backwards. Everyone wants more and more: consumption is unsustainable. The farmer sweats blood but he forsakes his produce. Instead of feeding his children, he sells it for cash to pay for necessities like diesel or cooking gas. The pittance he gets is little reward for his sacrifice. The rich consumer has little appreciation of the farmer’s toil and his own wastefulness is invisible yet he finds it unforgivable were he to be asked to pay more or make do with a little less.

Why are we born human? As sentient beings, we should realise that we are not masters of the earth but merely its custodians. We should worship creation by taking care to not abuse Mother Earth; to take from her only what we need; to pray to Parmatma that we live an honest, true and fulfilled life and we may be freed from the cycle of birth and death.

Our Dharma tells us this, but our leaders since independence have mostly been corrupt. Egotistic men who fool the masses, exploit the lack of education, and bribe the population with short term inducements. They behave like a supposedly educated and well heeled new daughter-in-law who enters her marital home and starts bossing it like a spendthrift princess with her worldly demeanour. The breadwinner’s toil is squandered on personal frippery. However, it is the uneducated village girl – often the older sister-in-law, brought up with the traditional virtues of forbearance, thrift, honesty, generosity and love, that keeps the home running.

Like all village Indians, we struggle from day to day, but we manage. Hard work is ingrained in our blood. India’s progress is due to the grassroots striving for themselves. I look around me and can feel that we are on an upward path. However, this is not because of, but despite so many so called national leaders, most of who for decades, have been in it for their own glory.

I can say that of late, the common man is beginning to take ownership of his life. Yes, there is progress here in Gujarat – water, electricity, employment, improved production in farming and industry. People feel greater self-confidence and political representation has improved over the last decade. Will India progress so that people meet their increased expectations like in the West? I hope so.”

While Valjibhai was talking, a few school boys wandered around waiting for school to begin.

“Let’s have a cup of tea”, Valjibhai insisted, and walked us to a nearby tea stall. The hot milky sweet tea was soon served in small plastic cups. Valjibhai continued with his discourse.

“It is disheartening to see that the young do not have enough good role models. These children go to school, but some teachers themselves show little passion and have total disinterest in their responsibilities. We should go back to the olden days of the Gurukul when the Sikshak instilled righteous values and the Guru-Shisya relationship was defined by what is good for society.

Like millions of my countrymen, I have not had a college education, nor have I been inside a library, so I can only talk about what I have learnt through life. I fear for the future and yet I am hopeful – the changes that our society needs cannot come soon enough for the new generations. We have to take on the new, but we must also preserve the tried and tested that is part of our dharma and our sanskruti. We have to embrace progress but still remain Indian”.

As the tea cups emptied, the conversation came to a close. Grimacing at a heap of used cups by the tea stall and not wanting to add to it, my daughter held on to our cups to dispose of them at a suitable waste bin.

We said our goodbyes and Valjibhai reminded me to write something in Gujarati!

Some days later, on the train from Delhi to Amritsar, we passed mountains upon mountains of plastic waste by the tracks at every junction.

Just as Valjibhai’s passion and wisdom echo the vision of a vibrant India, the plastic along the country’s railway arteries seemed a metaphor for India’s corrupt politicians: their mountains of ill-gotten loot has grown like the waste heaps.

It is said that the health of any modern and progressive society can be judged by the optimism of the masses that make up the middle class.  Social mobility as an indicator of economic strength is measured by the number of people moving out of poverty into affluence, greater employment and educational opportunities, increase in disposable income which society can spend on improved nutrition and health, and on non essentials. By these measures, and the cautious optimism and positivity that were evident on my travels, Gujarat is doing great. And, when Rajasthani and Punjabi taxi drivers who travel the country tell you this, there must be an element of truth to it.

It is heartening to see that the campaign for cleaning up Ganga has been given ministerial priority. Uma Bharati, whose Dharmic Pravachans (discourses) which I was fortunate to attend as a youngster in the UK during her days as a Sadhvi, well understands the importance of this holy river in the psyche of the masses and seems a highly capable person for the task.

It is even more heartening that the most famous chaiwala in the world has been given the mandate by the Indian people to appoint Uma Bharati to this important portfolio. Cleaning Ganga should be a metaphor for a cleaner, greener India.

A clean environment cannot simply be a ministerial mission: it has to be everyone’s business. All Indians must find sustainable ways for plastic disposal but more importantly, seek to reduce use of things made of this not-so-disposable material. Perhaps, one of the ways to start is engage communities in village cleanup campaigns? How about engaging all the chaiwalas of the nation in achieving this mission? Encourage the chaiwalas to use old fashioned clay cups to serve tea, for shopkeepers to go back to using recyclable materials like jute, coconut fibre and so on for bags, just like our forebears did.

How about energising every child in the nation through Education? On our travels, we came across a great example of an educative event in Ahmedabad. Thousands of kids from hundreds of the city’s schools participated in a Rangoli contest around the banks of Kakariya Lake to come up with designs to inspire change on important social issues like Community Cohesion, Global Peace, Gender Equality through saving the girl child, and importantly, care for the environment.

The new administration at the Centre is just a few weeks old but there is momentum and energy about the place never seen before. Civil servants and ministers alike are working to a new beat. There is a model to adapt and build upon: the past 12 years has seen the mobilisation of the talent and energy of 60 million Gujaratis towards progress and positive transformation. Gujarat’s progress should not be the sole measure: Indians have to be ambitious and simultaneously look both within our ancient cultural roots and outwards in the world in order to shape a brighter future for a physically, economically and ethically better India. Who knows, where India treads in the 21st century on the important global social questions, others will follow!