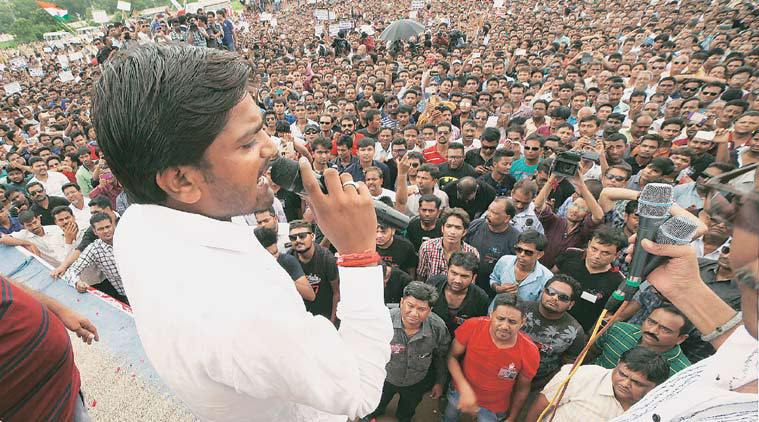 After much delay Census Report of 2011 was made public and before we could ponder over the data stating that the Hindu population has for the first time dropped below the psychological barrier of 80 percent, news of Patidar Reservation Agitation gone violent started spreading. Sometimes, history repeats itself in many ironical ways.

Patidar Community in Gujarat is one of the most wealthy and influential, socially upward community. If I can state my personal experience, it is one of the most warm, hard-working and united social group of people, and they are an important part of Gujurati Samaj and of course Gujarati Asmita.

However with them dominating the number of legislators in Gujarat Assembly, apart from representation in municipal bodies, Panchayat, Sahkari Mandli, so on and so forth, Patidar community has a fair share in the corridors of power. The same was true even during Narendra Modi’s Chief Ministership in spite of being portrayed otherwise. Therefore to conclude that the community is marginalized in terms of power share would be incorrect.

Securing representation in government jobs or in educational admission system is no doubt beyond debate, but this is equally true for other upper-castes, and thus the anger of being marginalized can be justified to an extent. But to simply view the Patidar reservation agitation as a community’s fight to enroll itself in the much ‘coveted’ reservation status would be oversimplifying things.

Gujarat, now at least for more than two decades has shown consolidation of en-masse Hindu vote and much credit for the longest Hindu mobilization phase in Gujarat goes to the trio of Keshubhai Patel, Shankarish Vaghela and none other than Narendra Modi. After the fiasco of Khajuriya-Hajuriya and Shankarsinh Vaghela leaving BJP, a phase of many different Chief Ministers and Keshubhai getting dethroned, it was Narendra Modi who had not only captured the confidence of Gujarati people with a successful Gujarat model of governance and Gujarati Asmita, but also won hearts and minds of common public as there is a genuine feeling that development has reached the masses, and there was a sense of relief that Gujarat had put behind days of political uncertainty, rioting, and miss-governance.

During the entire period of Narendra Modi as Chief Minister of Gujarat, Congress’s attempt of revival of KHAM (Kshatriya-Harijan-Adivasi-Muslim) politics with a popular Kshatriya leader Shankarsinh Vaghela at the helm or Keshubhai Patel’s GPP experiment of patel-power lobby has been unsuccessful due to consolidated Hindu voting on vikas and Gujarati Asmita. The same consolidation was witnessed during May 14 when Hindus voting for “Sab ka Sath Sab ka Vikas” made Narendra Modi the Prime Minister of India.

This brings us to the crux to the famous Patidar agitation and its leader Hardik Patel. Amid all the grand strategies floating around, apart from being an agitation for reservation, it was a display of numerical strength – a shakti pradarshan, largely to test the waters of post-Modi Gujarat and see whether a new CM from same community can be arm-twisted to suit community interests and divide Hindus along caste lines or on the lines of a mini-mandal agitation hoping to pit upper-castes against OBC/SC-ST for political mileage.

The whole of power rally at Ahmedabad looked as if, while aiming at CM Anandiben Patel and Gujarat Government, it was shooting at Narendra Modi. This can be seen in the way Hardik Patel received accolades from across the non-BJP political class, from Arvind Kejriwal to Nitish Kumar, and the main stream media.

It is illogical to assume that the reservation demands of a community can be equated with the failure of the Gujarat model.

It’s another question how this agitation can dent chances of BJP’s coming to power for fourth consecutive time in 2017. If we analyze beyond the pomp and vigor of power-play, nothing substantive emerges to prove that it will. Patidar community is around 18% of total population and are further divided into Kadva Patel and Leva Patel, hardly cohesive with each other, apart from other subcategories. It will be too much to assume that one rally, where for the first time made Kadva and Leva Patidars shared the same podium, will translate to total electoral annihilation for BJP. Even if there were elections held today in Gujarat and Patidar community voted against BJP, a counter polarization of other upper castes plus OBCs roughly amounting to 50 percent may happen in favor of BJP. Also it is doubtful whether en-bloc Patidar electorate will be in favor of a virtually non-existent Gujarat Parivartan Party (GPP) of Keshubhai Patel or  Congress, and whether the same will be enough to stop BJP from winning again. The mathematics is not as simple as proclaimed by Hardik Patel!

Speaking of the new face of Patidar Community, Hardik Patel – a young 22 year old leader with gusto, a nemesis of Narendra Modi in the language of mainstream media – while he continues the reservation battle of Patidar community, his stakes are already tanking in the state after agitation took a violent turn. Gujarat is far away from the typical Marxist tactics of revolution and unlikely to get support from public, be it Patidar or anyone else. While many I have spoken to supported agitation for the sake of community-unity, many also condemned Hardik Patel for his political immaturity when mobs took over the agitation and the livelihood of common people were disrupted, not to forget the severe damage to public property and the unfortunate loss of lives.

This makes us wonder if there is bigger game of hidden agendas going on behind the curtains, involving people who were made redundant by Narendra Modi. After all this is not the first time that Patidar card has been played. During 2012 election it was rumored that GPP came into being with hidden support of marginalized leaders like Sanjay Joshi, Gordhan Zafadia, Vallabh Kathiriya and the old guard in RSS, with tacit support from the Congress, who thought it can cut into BJP seats.

The general mood of the public may be in favor of abolishing reservations and to make amendment for economically backward classes but hardly anyone believes that the menace it has created can be wished away so easily and than somehow Narendra Modi is responsible for not doing so. Trying to play mischief in the Prime Minster’s own backyard, may eventually backfire for the agitators.

The author is a healthcare management professional and a keen observer of Indian Politics and Foreign Policy.