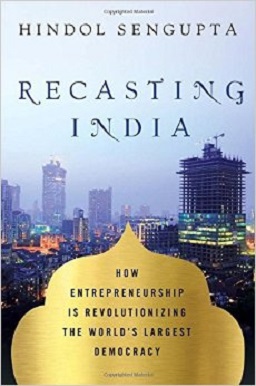 IndiaFacts editor Sandeep Balakrishna recently caught up with author and journalist, Hindol Sengupta for a casual chat about his latest Recasting India, which has received critical acclaim. Recasting India has been nominated for the Hayek Book Prize, given by the Manhattan Institute for original economic writing that celebrates the themes of Nobel laureate F. A. Hayek.

Sandeep Balakrishna (SB): I finished reading your latest, Recasting India. Three words come to mind: well-researched, engaging, and informative. Apart from the breakfast-table-conversation with your parents, what else inspired you to write the book?

Hindol Sengupta (HS): Certainly a sense that the grassroots entrepreneurial story in India had never been told. For instance, since I am writing these answers while listening to Arun Jaitley’s budget speech, I am delighted to hear about the Mudra Bank which will provide much needed financial assistance to millions of entrepreneurs who, at this point in time, get little or no assistance to access finance. I would have liked to see this bank not as a PSU but as a private initiative but even as a PSU this is a breakthrough idea. From my work as a journalist, I got a very strong feeling that the India story was being divided into two essential parts –

In all this, I realised that we were missing out on what is perhaps the real story – a grassroots-up revolution led by entrepreneurs and a natural entrepreneurial culture that was not celebrated as much as it perhaps ought to be. This is when I started my research on the subject and the result is Recasting India.

SB: Recasting India is essentially a story of a rapidly-changing-and-growing India, a change and growth driven by small-to-medium (SME) entrepreneurs. Why choose them? Why not the corporate behemoths who’ve also contributed to the trickle-down effect, so to say, that indirectly enabled these SME guys?

HS: One primary reason for choosing smaller entrepreneurs is that this is the sector that brings in not just half the country’s GDP (as a recent Credit Suisse report has also noted) but also provides the bulk of India’s non-farm jobs. As S. Gurumurthy has noted, the corporate sector brings in only 15% of national consumption and of this barely 4% comes from listed companies. But it is the large corporates who get a disproportionate share of the national conversation and attention. Even in terms of growth, unincorporated business has grown far faster than corporates in India during first two decades of liberalization.

Some of this is obviously because it is so tough to run large businesses in India but it is also because there is a natural agility in Indian society which comes from traditional communities working together and supporting each other which is little understood and even less documented. There is one key thing to understand here – in the West, the idea of entrepreneurship is deeply with the individual, whereas in India more often than not, it is entwined with the idea of the community.

Now this has some restrictive impact – for instance friction within large family-run groups where many members of the family and even distant family are involved – and those problems have been well-documented but what is not often celebrated is how resilient and determined these millions of entrepreneurs really are and how with very little help and finance from the state, and mostly working with terrible state infrastructure, they have done a miraculous job. The point is – if they have been able to do all with so little support, imagine what they can achieve if the government makes it easier to do business in India.

SB: It is doubtless that you’ve travelled long, far, and wide for researching this book. If I were to ask you to list the top three common features that struck you in all these journeys, what would they be?

HS: If I may talk of one overwhelming attribute instead three, it would be optimism. Almost everywhere I went and no matter who I spoke to, especially outside the main cities, and especially outside Delhi, the overarching, most potent feeling was that of hope. That is why I write of Per Capita Hope in my book. This is what the last twenty five years have brought to India. It has brought hope. Even those who do not have what they want or desire, there is finally a sense that they too might make their lives better.

There just might be that opportunity to make their lives better. This is a tremendously powerful feeling. An enormous amount of what goes right in India these days is driven by this hope.

SB: It appears that the 2002 Gujarat riots episode and Narendra Modi has seduced you as well. I’m speaking after reading your chapter on Zafar Sareshwala, the Gujarati Bohra Muslim community, etc without mentioning Hindu businesspeople in Gujarat. Some might even criticize that on the grounds of, “oh but why call them Muslim businesspeople, why not Indian businesspeople?” Your take?

HS:  I don’t think that there is any seduction required to see that Mr Modi did some good things in Gujarat which can be emulated in other parts of the country. He also had a major role to play in recrafting the narrative of Gujarat and holding it up differently to the world. That the renegotiation with the Muslim community in Gujarat was led by Muslim businessmen is a story that has never been told in depth and that’s what this chapter attempts. What I also found was that the Bohras, even in Bombay etc, and other Muslim entrepreneurs saw Modi a little more holistically than many of his critics. At the end of the day, the victory that Modi won could not have been possible if no Muslim in Bihar or Uttar Pradesh voted for him. And as far as the riots are concerned, that is for the courts to decide.

SB: I personally liked your chapter on the Shriram group. Tell me what put that business group on your radar.

HS: When the chit fund scandal broke in Bengal, I began to research whether there were any examples of this kind of businesses doing an honest job in India. And realised that Shiram Chits had a formidably honest reputation. So I started by exploring how Shriram Chits keeps it clean and then realised that there was a much larger Shriram Group waiting to be done.

SB: Equally, the story about the maid service was in parts inspiring and moving. Do you see any role of regulatory action to mitigate some of the more unsavoury stuff involved in it?

HS: It is one of my personal favourites in the book. So one simple way of cleaning this is – better policing (Gurgaon and Haryana has a terrible policing problem). The police are often the problem and not the solution.

SB: Even as the rural landscape of India changes—where people increasingly see that making money is perhaps the only way out to a better life—what do you think will happen to the valuable cultural treasures they still possess?

HS: It is not necessarily true that economic prosperity destroys culture. In fact in many parts of Europe, people have only grown closer and closer to their roots and heritage with economic prosperity as it has allowed them the freedom to conserve, preserve, contemplate. In fact, what actually happens is more of a cycle. The first wave is consumption, consumption, consumption – but there is only so much you can consume. Once those who have been impoverished for a long time have their fill of consumption, they then move on to treasuring other parts of their life, and culture is the foremost on that list. There can be no real preservation or conservation without good economics first.

SB: Parts of your book remind me of Gurcharan Das’ India Unbound in terms of tone and narrative. Were you subconsciously inspired/influenced by it?

HS: I have known Mr Das and his work for many years. He has been an early supporter of my work. I think it is not incorrect to say that India Unbound is in some senses the mothership of personal-economic writing in the liberalisation era in India. That book brought about a new narrative for India. In a sense, we who are many decades younger than Mr Das, when we write, pay our own little homage to India Unbound. All writers must in a sense be aware of what writers before them have achieved. Without that sense of history, there is arrogance and arrogance in any writer only leads to poor storytelling because we are not listening enough.

SB: Now a question from an author to another: if you would rewrite this book, which parts would you rewrite?

HS: I would add another chapter – on the Swatantra Party experiment and its history. Apart from that, there’s not much I would rewrite.