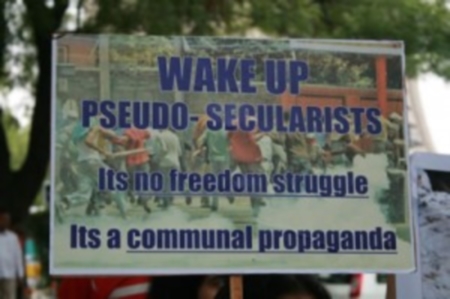 The polls for the 16th Lok Sabha are underway what with record polling rates in every constituency. Following its commitment to fostering a clean public discourse, IndiaFacts presents the following facts about Indian secularism, the dominant strain of public discourse in the last 65 years.

1. There are nearly 52 Muslim countries.

2. NO Muslim country extends the special rights to Hindus that Muslims are accorded in India.

3. NO democracy in the world craves for the indulgence of the 15% minority that the 85% majority does in India.

4. NO Muslim country has a non-Muslim as its President or Prime Minister.

5. NO Mullah or Maulvi or Imam has declared a fatwa against Islamic terrorists.

6. Hindu-majority states like Maharashtra, Bihar, Kerala, Pondicherry , etc. have in the past elected Muslims as Chief Minister.

7. No Hindu has ever become the Chief Minister of Muslim-majority Jammu and Kashmir since Mehr Chand Mahajan who demitted office in March 1948.

1. Hindus form 85% of the Indian population. If Hindus are indeed intolerant, how are Masjids and madrasas are thriving and new ones are getting built almost everyday?

2. If Hindu fundamentalism/fascism/militancy is indeed a reality, how are Muslims allowed to offer Namaz on the road?

3. If Hindus are intolerant, how are Muslims allowed to proclaim five times a day, every single day, everywhere in India, on loudspeakers that there is no God except Allah?

4.  It was Hindus who gave 30% of the land of undivided India to Muslims getting nothing in return. And it is these intolerant Hindus who are yet to recover their most sacred places of worship like Ayodhya, Mathura and Kashi?

5. If Muslims and Christians are minorities in Maharashtra, UP, Bihar etc, aren’t Hindus minorities in Jammu and Kashmir, Mizoram, Nagaland, Arunachal Pradesh, Meghalaya etc? So why are Hindus denied minority rights in these states?

6. When Christian and Muslim schools can teach the Bible and Quran, why can’t Hindus similarly teach sacred Hindu texts like the Bhagavad Gita or Ramayana?

7. Why are the post Godhra riots blown out of proportion, whereas no one talks of the ethnic cleansing of 400000 Hindus from Kashmir?

8. Why are temple funds spent for the welfare of Muslims and Christians, whereas the Churches, Mosques, and Madrassas are free to spend their money in any manner that suits them?

9. Abdul Rehman Antulay was made a trustee of the famous Siddhi Vinayak temple in Prabhadevi, Mumbai.  Can a Hindu–even someone like Mulayam or Laloo–ever become a trustee of a Masjid or Madrasa?