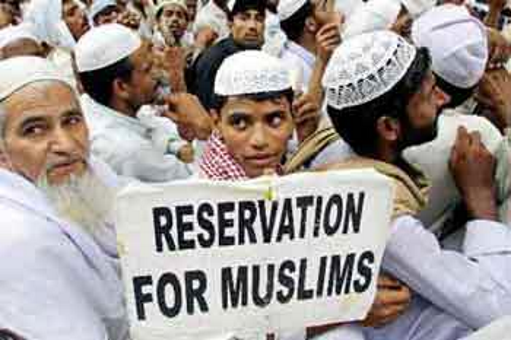 What is ironical is the fact that Muslims and Christians, who are the top two religions of world are treated as minorities in India although their population share in India is more than 20 per cent.  According to Articles 15,16,26, and 30 of the Indian Constitution, any Bill or law passed by any State or Central Government exclusively to favour minorities is illegal.

However, in practice, for over six decades, successive Central Governments and various State Governments have passed a whopping number of Bills and schemes that favour minorities at the expense of the majority.

The objective of this research presentation is to provide a partial list of  some big ticket expenditures made by such Governments till April, 2014 for Muslims and Christians.

Muslims and Christians enjoy unique and discriminatory benefits as compared to Hindus–whether they be SC/ST and Hindu OBCs–under some of these heads:

The schemes listed in the presentation are not applicable for Hindu SC/STs. Some of the bills are also applicable for Sikhs, Buddhists, Jains and Parsis. But the percentage of expenditure equivalent is in the range of 15 to 5 per cent.

What is even more stunning is the fact that a majority of these privileges for Muslims and Christians in India are not available for Muslims in Pakistan and other Muslim, and Christian Countries.

This presentation or the list of bills therein is not complete. It is the first of sorts in a larger project to bring to light such state-sponsored discrimination against Hindus.