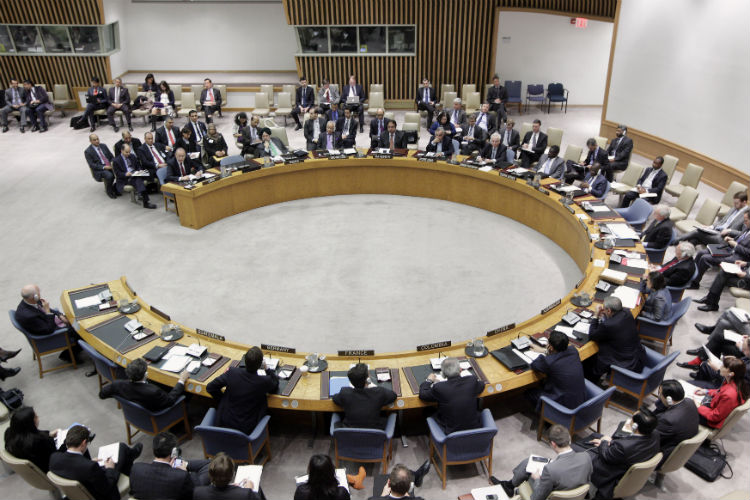 In 1998 when Germany attempted to push the United Nations General Assembly for a vote on new permanent members, Italy’s ambassador Francesco Fulci managed to scuttle the move, saying his country had an equal right to such a position because “after all Italy too had lost World War II”.

Fulci’s sarcasm is a pointer to the global rivalries that are checkmating attempts at expanding the UN Security Council’s permanent membership from the current five or P5 – China, France, Russia, the UK and US.

Reports in the Indian media that Russia betrayed India are the result of the imagination of misinformed journalists who also lack a basic grasp of geopolitics.

Russia – like most large nations – has few friends in its neighbourhood. If Germany and Japan – both American allies – become permanent members at the Security Council, they are likely to create more headaches for Moscow.

Russia is only protecting its interests as any self-respecting country is entitled to. Those expecting India to be a shoo-in to the UN’s inner sanctum are only delusional. If anyone has betrayed India, it is its own elites, which we will come to in a moment.

On its own, India had a remote chance at permanent membership, but it was lost when it formed the Group of Four or G4 with Japan, Germany and Brazil. These three countries face much stronger opposition around the world than India.

China, for instance, is paranoid about any proposal that allows permanent membership for Japan. Even if it settles its old disputes with India, Beijing cannot overcome the fear of its ancient enemy.

Japan also faces Russian opposition. Again, France, Russia and the US don’t share Germany’s enthusiasm for inclusion. The US continues to be spooked by Japan’s attack on Pearl Harbour.

And the US, UK and France are certainly not keen to see European strength diluted by more Asian, African and South American members.

It gets more complicated at the regional level. In a paper titled ‘The Reform of the Security Council of the United Nations: Why Still an Open Question’ for the Mediterranean Academy of Diplomatic Studies,(https://www.um.edu.mt/__data/assets/pdf_file/0005/194234/Amb._Francesco_Paolo_Fulci_MedAgenda.pdf) ambassador Fulci writes: “In Asia, countries like Pakistan, Indonesia and South Korea are adamantly opposed to a virtual hegemony of India and Japan. In Latin America, Mexico, Argentina and Colombia harbour similar feelings toward Brazil. In Europe, and more broadly in the western group, countries such as Italy, Spain, Canada and Turkey strongly reject the idea of being ‘downgraded’ and marginalised not only vis-à-vis France and the UK, as already happens, but also with respect to Germany.”

It’s demeaning that economic powerhouses like Germany, Japan and India need to beg for permanent membership. Such shameful supplication is taking place even as these countries are playing prominent roles in bodies such as the G-20, APEC and BRICS, which are more effective at shaping the world’s future.

Any self-respecting Indian would cringe at news that Indian Prime Minister Narendra Modi sought support for India’s permanent membership from such geopolitical heavyweights as Ireland and the UAE. Apart from the fact that India has repeatedly fallen short of the required numbers at the UN, don’t Indian diplomats realise both Ireland and the UAE are close allies of the US? Will Modi beseech Somalia next?

Ramesh Thakur, former UN Assistant Secretary-General, writes (http://thewire.in/2015/09/25/those-who-beg-do-not-deserve-permanent-membership-of-the-security-council-11554/) about India’s amateurish foreign policy in The Wire: “It happens with distressing frequency: the Indian political and foreign service elite loves to get a sound-bite on the matter from every single visiting dignitary, no matter how irrelevant – for this purpose – his or her country may be. And the mainstream media dutifully reports it as an indicator of India’s global standing. In reality, it just confirms to all serious observers of global affairs that at heart India retains a supplicant mentality, except that the begging bowl has changed from requests for financial aid to affirmations of status.”

According to Thakur, a distinctive pathology of Indian foreign policy is that “it is typically aspirational without being programmatic”.

Thakur offers a solution to this geopolitical Gordian Knot: “To begin with, the G4 should refuse to take part in the elections to the non-permanent seats. By participating in the process and taking two-year turns as elected members, they effectively legitimise the Security Council as currently structured. Conversely, the likes of all four of them not serving on the Council for a decade or more would thoroughly delegitimize it.”

The G-4 should then refuse to contribute troops, civilian personnel or funds for UN operations. “They should let others provide the necessary personnel and, since peacekeeping operations are funded by voluntary contributions, they should refuse to volunteer any funds. Where the US has led in showing the effectiveness of purse diplomacy, they should follow,” Thakur says.

Since India has been one of the largest contributors – 180,000 troops since 1950 – and has lost more soldiers (157) in UN operations than any other country, India’s absence will be felt.

According to Thakur, such steps will “throw a monkey wrench in the UN system”, forcing the UN’s five permanent members or P5 to “tackle the thorny issue instead of the preferred posture of permanent procrastination”.

Is it Worth It?

The moot question is should India aspire for permanent membership in an organisation where – to use the words of George Orwell in Animal Farm – “all animals are equals but some animals are more equal”?

“The Permanent Five have behaved and continue to behave in ways that suggest that they see the power that they hold as rightful and free, to be exercised by them in whatever manner they choose,” writes Richard Butler of the Penn State University School of International Affairs in a paper titled ‘Reform of the United Nations Security Council’. (http://elibrary.law.psu.edu/cgi/viewcontent.cgi?article=1001&context=jlia)

“The notion that this power was given to them, over strenuous objections, but for the reason of the good that it might do in preserving the peace, has been substantially replaced by the idea that they have a power that they can use to protect and extend their own individual national interests. This selfish outlook is often not consistent with the purposes and principles of the (UN) Charter.”

Neither France nor the UK deserves to be in the P5. French influence is down to a last few pockets in Africa. As for the UK, it can’t fight a war without big brother America providing protection.

But does India deserve permanent membership? The country’s political leadership must realise that their primary – and only – duty is to place India’s interests foremost. But they suck at this simple task.

In 1955,India’s first Prime Minister Jawaharlal Nehru declined an offer by Russian Premier Nikolai Bulganin to accept a permanent seat in the Security Council. Nehru had suggested that the seat, till then held by Taiwan, be offered to China instead.

S. Gopal writes in ‘Jawaharlal Nehru – Vol II’: “He rejected the Soviet offer to propose India as the sixth permanent member of the Security Council and insisted that priority be given to China’s admission to the UN.”

In a paper titled ‘Not at the Cost of China’, (https://www.wilsoncenter.org/publication/not-the-cost-china-india-and-the-united-nations-security-council-1950#sthash.d9psQcIG.dpuf) Anton Harder of the Wilson Center writes that Nehru lied in Parliament about the offer of a permanent seat. “Despite Nehru’s denial then, and online debates now, the 1955 offer from the Soviets is in fact well-documented, although perhaps not widely known.”

Before Bulganin’s offer, the US had in 1950 suggested that India take China’s place in the P5. But Nehru rejected the offer, saying, “It would be a clear affront to China and it would mean some kind of a break between us and China. I suppose the State Department would not like that, but we have no intention of following that course. We shall go on pressing for China’s admission in the UN and the Security Council…. India because of many factors is certainly entitled to a permanent seat in the Security Council. But we are not going in at the cost of China.”

Nehru’s misplaced magnanimity is haunting India to this day.What Modi is campaigning for now is what Nehru and his acolytes lost six decades ago. Clearly, India has been betrayed by its own elites and no one else.

Instead of angling for a permanent seat, Modi should concentrate on his vision of making India a $20 trillion economy. That matters more than rubbing shoulders with spent powers like the UK and France in a comatose UN.