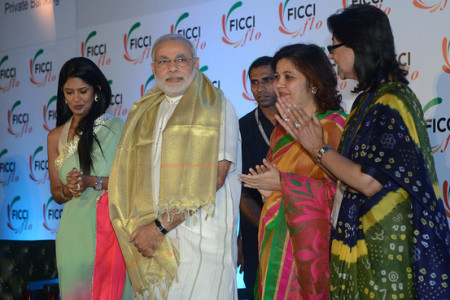 ‘Women and Children Development’ is complex and needs something more than a linear solution. Women, who constitute half the population, are caught in a vulnerable cycle of physical weakness, violence, illiteracy, poverty and marginalization to name a few.

According to a study, the Development of Women has following stages:

The other two stages of Participation and Adoption are considered to be active where women proactively get involved and seek interaction with organisational interventions, local agents, and other active women in the community. During these stages of development, women are interested in learning how to bring an improved life to themselves and their families, where they can seek help and resources, when they can start to achieve this development, and in the third stage i.e., of Leadership, they want to spread their positive experiences to the broader community. These three stages are best handled by Emotional and Spiritual Quotient.

When one understands the above stages then only one can appreciate the Gujarat Government’s model of development which can also be termed as Narendra Modi Model for Women and Child Development.

This Model primed by Narendra Modi, shares information, sets direction, establishes consensus, stimulates actions, orchestrate processes, rewards, and balances long term and short term goals while revisiting conventional wisdoms. This model looks at the bigger picture of improving lives of the women in a holistic way. Model consider the society’s and women’s long-term professional and personal growth, while looking at how the solutions can help women escape the vicious cycles of discrimination, poverty, illiteracy, and unemployment, among others. Given the magnitude of problems associated with women’s inequality, systematic progress can be made only by taking a holistic look, like: who are some of these women? What are some of their needs, challenges and aspirations? How do these characteristics vary with ascending levels of empowerment? How should we think holistically about designing appropriate programs, technologies to empower them?

It is not a linear model. It means constant evaluation and awareness of the big picture as well as awareness of the details of getting everyday business accomplished. Criticisms of any government’s initiatives are many. Sunil Krishna in Genderscapes writes: “In the post-independence period, India’s policy towards women was conventional and welfarist, clubbing women with children and the disabled. Since the 6th plan (1978-79 to 1982-83), there has been a more specific focus on women although this has lacked consistencies and has wavered between the earlier welfarist and the more recent ‘instrumentalist’ approaches. This is also so with regard to women and natural resources. Specific policies such as those for agriculture or water and the recent 10th plan document, as also state level initiatives, show that policy-makers are conscious of the lack of gender-equity … .it is not women’s empowerment that is the real focus of policy but rather the strengthening of women as the most effective instruments to improve family welfare, environmental conservation, and wasteland regeneration and so on. Such an approach has been called the ‘efficiency’ argument but I prefer to use the term ‘instrumentalist’ because it more clearly shows where the focus lies.

The New Agricultural policy, 2000, which is the part of the 10th plan, is explicit about the instrumental rational of giving women land rights (see also Rao 2005): “Strengthening the conditions of female farmers and female labourers would also help improve the food security at the household level. This is because generally women spend most of their income on household expenditure unlike men and this would help improve the nutrition of the children.”
Likewise, the plan chapter on environment and forests states that rural people, particularly women and tribal communities, have an intimate knowledge of species, their growth characteristics, utility, individual value etc. It says this knowledge is ‘utilised’ for the community under Joint Forest Management. In the past, similar arguments have also been explicitly put forward regarding professional women forest officers; the forest service could use them as instruments to carry the message of forest protection to village women, and through them to village communities.

At the state level too similar sentiments are expressed. The intention is clear: increase women’s management of resources to improve conservation and family welfare.

The equity concerns that are sprinkled through policy statements and the program document effectively masked the reinforcement of women’s traditional roles and the release of men from responsibilities from household, food provisioning and community resource conservation.

The Planning Commission midterm appraisal of the 10th plan is also revealing: it lists 59 priority actions that it says could yield results immediately. …Gender concerns are not separately addressed in any of this priority action…

Given this policy scenario it is not at all surprising that women’s empowerment has been far from being the focus of modern scientific resource management. “… Their productive participation in the household and larger economy, and their contribution to the conservation and sustainability of resources, is either ignored by policy makers or appropriated in instrumentalist ways.”

But these criticisms doesn’t hold true for Narendra Modi’s Model. Gujarat Government’s programs have always seen women as Shakti. In fact it will be safe to say that Government of Gujarat is ahead of the challenges which might develop due to changing world scenario and related criticism. For example, feminist scholars have long challenged the view that there is a positive correlation between political and economic liberalization (Elson 1989, Afshar and Dennis 1991). They have argued that the increased pressure arising from economic liberalization are exacerbating the burden that women carry in their daily lives and therefore reducing the time and space for them to be politically active. (The Gender Politics of Development, Shirin M. Rai). In Gujarat Mission Mangalam empowers women as well as Samras Panchayat schemes takes women’s participation in politics to next level. Not to forget that “Gujarat is the first state to pass women’s empowerment Bill for 50 per cent reservation in local bodies, but denied assent despite Governor being a woman.”

This model helps leaders observe transformation from success to failure and take remedial measures. It also helps identify new programs which will help the organisation to jump to next curves of growth and development.

As women attain more equality of Control in factors of production and distribution of benefits, they can gain more equality in Welfare (such as in food supply, income, and health care), While this model informs priority areas of gender equality to focus on for developmental interventions, this model also emphasize design directions, and does provide an understanding of the actual external contexts and practical situations faced during grass- roots development work such as the actual stakeholders, intra-family and intra-community social interactions and socio-cultural dynamics, organizational best practices harnessed, problems faced at each stage by the stakeholders, and other practical details that are necessary for women’s development and empowerment.

Success mantra of this model is that it is an integrated model of long-term development at the grassroots. Thinking behind Policies and Programs of this model is that enhanced status of women is an index of growth of a society and civilisation. It has been done by inspiring the bureaucracy and giving them secure tenures to implement policies on the ground.

One of the critics about Women’s Development program, Prabha Kishore writes: “I feel that the whole purpose behind the government running these programs is that it can create a pool of sensible women voters. The need a women who can vote sensibly and who can talk – so that the government can say to the world, ‘see our women are so empowered’.”

Even this criticism doesn’t hold good in case of Gujarat. Narendra Modi asks mahila sarpanchs to work as CMs or PMs of villages: In a function held at Gujarat University convention hall in Ahmedabad Chief Minister Narendra felicitated 831 female sarpanchs of Samras village panchayats and gave away incentive prizes worth Rs. 22.50 crore. Chief Minister said that women in villages have already proved their leadership guts by effectively managing water distribution work through WASMO and by being successful in dairy and animal husbandry industry. The female sarpanchs have all the strengths required to bring grassroots changes in villages. They should feel as if they are the chief ministers or prime ministers of their area and should effectively manage the panchayat administration….

“As many as 250 village panchayats have become Samras entirely. It is unique and commendable that males of these villages have given a way to women for taking charge of panchayat administration. This will infuse villages with fresh vigor,” ascertained the Chief Minister. Referring to Mission Mangalam and Sakhi Mandals Chief Minister said that with such unique steps the state government has helped around 2.5 lakh rural women to get free from the shackles of debt and other financial problems by their economical empowerment. This was possible because of “Leadership development trainings to Mahila Sarpanchs have been established to support women candidates in Panchayat elections” under Nari Gaurav Niti. Not only this: in Gujarat, the percentage of women voters went up in the state from 57 in 2007 to 68.9. Now women decide on their own whom to vote for, unlike in the past when the head of the family or their husbands used to decide for them.

According to Shri Narendra Modi, “This is an era of quantum leaps in development. This is an era of ensuring and securing active participation of the Woman Power in Development.” Empowered women can contribute significantly towards the overall development of women in the State. Under this scheme the State Government gives rewards to villages where panchayat members are elected with consent so that elections can be avoided. The objective of Samras is to avoid inter-village enmities which the election politics create. The reward amount is Rs. 3 lakh for all women panchayats in villages with a population below 5,000 and Rs. 5 lakh for those with more than 5,000 people. Out of 2,147 villages that opted for the Samras scheme, 254 have elected only women as panchayat members, including the Sarpanch. “The number of such all-women panchayats has risen from 20 in the last elections to 254 this time,” said Deputy Rural Development Commissioner. (Source PTI)

The above statement of Chief Minister calling women to take leadership role actually makes the whole women and child development initiative unique and justified to be termed as ‘Narendra Modi Model of Women and Child Development’ instead of ‘Third Curve of Development’.

Apart from being in the ‘third curve’ of ‘Development of Women and Child Development’, the wide acceptance of the development initiatives taken by the Government of Gujarat by Central and Various State Governments across India establishes the fact that the initiatives have gone beyond statistics and have become a full-fledged model which needs to be documented, studied, taught and implemented.

Excerpted from Sandeep Singh’s book “ Third Curve: Saga of Women and Child Development—Gujarat”. This has also appeared before in the magazine Uday India. Sandeep Singh can be reached at www.swastik.net.in.