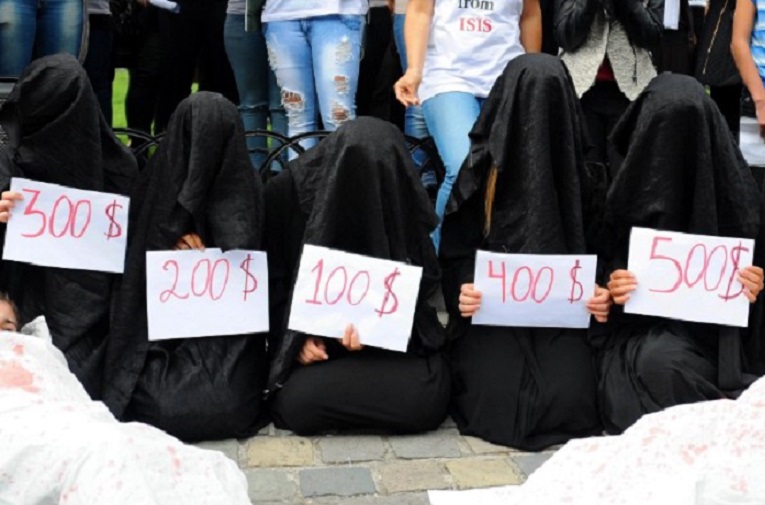 This is a translation of an essay titled Meyeder Ratechart published in ABP on 31 May 2015.

Michelle Obama is worth only forty American dollars. Not a cent more. Indeed, even $40 is too much for someone like her in the midst of all these beauties. But what is this? Fixing the price of the first lady of the US? You read that correctly. This is the demand made by the internationally infamous West Asian terrorist group ISIS (now called IS).

An article penned in the newest issue of the ISIS propaganda magazine Dabiq claimed that, compared to the other beautiful girls sold at the market run by the ISIS, Michelle cannot fetch more than forty dollars. Market? A market of girls?  Again, you heard it right. There are sex slave markets operating in the cities of Mosul (Iraq) and Raqqa (Syria). Once you buy the girls, you can have as much fun with these girls as you want. You can rape them, and if they refuse to follow your instructions, you can skin them alive, and of course, you can shoot them dead if they try to escape.

Actually, the vile comment on Michelle Obama was made by the wife of a jihadist. Yes. A woman. But the real question is this: what yardstick  did she use to fix Michelle Obama’s price at forty dollars? Answer: with the help of a rating-chart. Just like there are boards outside eateries stating the price of say, a chicken roll, mutton roll, egg roll etc, these charts too, fix prices for the item: in this case, women.

Combining massive illiteracy and raw brute force, this Islamic State (yes this terror group thinks of itself as a state) which has occupied large portions of Iraq, Syria and Yemen in order to establish an ‘Islamic empire’ has been successful in luring away youths from several progressive countries and is also giving many rogue states sleepless nights. Now with all their might and pomp, the Islamic state has started the trading of women as sex-slaves in their markets.

And there is no dearth of girls: after occupying most of northern Iraq and imprisoning the Yazidi and Christian families residing there, these ISIS terrorists are separating the young female members from the rest of the family before taking them to the market and selling them as expensive sex slaves. These unfortunate girls have been raped by multiple members and “soldiers” of ISIS. The desires of the foreign jihadists come first in line as they need to be lured in to the conflict zone.

A certain pro-ISIS website is making vile and illogical statements like ‘It is a blessing and not a crime in selling off Christian and Yazidi girls as sex-slaves. It is a suitable punishment for these families as they rejected Islam for some other faith’ and ‘Imprisoning and selling female kaffirs as sex slaves is supported by the Sharia.’

‘We have information that the demand of cows and girls have reduced in the market and this is affecting the revenue of the Islamic State and causing problems for the mujahedeen. Keeping this in mind we have brought certain changes to the prices of the Christian and Yazidi girls as given below:

One and three year old sex slaves? What kind of sexual pleasure are these terrorists seeking? Only the lowest form of despicable scum can seek sexual pleasure from these children. Some also claim that girls from this age-group are kept unscathed, well-fed and nurtured in order to sell them when they are old enough. In other words, these girls are more like an ‘investment.’ And a healthy one since the demand for young sex-slaves is sky high.

How young do these slaves need to be? Can a pre-pubescent girl be sexually enjoyed? The website answers: If the girl’s bodies are prepared for sexual acts, then she is suitable to be enjoyed.

A fifty year old Jihadi bought the eight year old Fasida, claiming to raise her as his daughter. That night he took her to his room for her to sleep. The next morning Fasida was experiencing pain all over her body as blood was dripping from her lower waist till her thighs. She had to experience this pain repeatedly for some days till one day she aimlessly wandered in the city of Raqqa and begged for shelter from a family. Although the family gave her shelter, they charged a heavy ransom from Fasida’s real family before returning her to them. Now Fasida is undergoing medical treatment in a camp. When she was first brought in, she was constantly speaking gibberish, and then went silent for two months.

There is also the sorry tale of the nine year old who is now pregnant after being repeatedly raped by nine jihadists. Although she is rescued, it will be impossible to save her life: whether she gives birth or goes for abortion, her life cannot be saved.

And this is the kind of sadistic pleasure these terrorists like to experience. According to them, ‘Once they grow old, they will realize what is rape and sexual assault. At this age they are not aware of such things and that is where the fun is! We get our kick from their innocence!’

And this is not the act of a few demented individuals but the desire of many Jihadis that is fulfilled by ISIS. With calculated precision they kidnap and imprison these girls in some abandoned house, or in the hangout of a leader or in a brothel, before auctioning them, which is at times substituted by ‘rape lotteries.’

‘Bring that eight year old girl , also get that sexy twenty year old in the corner and the feisty one sitting below window number three. And let the others tremble as they wait their turn.’

Those who are selected are given a bath akin to the sacrificial lamb before slaughter. If she disobeys, whip her, pull her by the hair, drag her sorry body around, bang her head against the wall. After she goes through all the pain, lock her up in the dark chambers. Once her health improves, restart the process all over again.

Jalila , a twenty year old girl pleaded multiple times to let her go. She was allowed to rest after being forced to have sex with seven men. When Rashida realized it’s her turn, she was desperately looking for a way out. While taking a bath she found a bottle containing a strangely-coloured liquid. On correctly comprehending it to be poison, she and the other girls consumed it. But the defective poison betrayed them, as they only fell sick.

Eleven year old Zamara did successfully commit suicide, by tying her scarf around her neck and hanging herself. But this was after seven men raped her. A girl named Wafa informed Amnesty International that she and her sister attempted to end each other’s lives one night by throttling the other’s throat mustering all their physical strength. But their activity awakened the other girls who prevented them from dying.  They were unable to speak for a month.

Zainab successfully escaped after attempting to commit suicide about seven times: three times by slitting her veins, and the remaining, by attempting to hang herself. Each time she was saved by her captors who thrashed her so badly that even the most battered bruises will pale in comparison. After her first failed attempt, she was sold to a Lebanese man. While trying to escape from him, she was caught and returned to Iraq.  As punishment for her third attempt, she was locked in a dark chamber for two days. Yet she did not relent. It was then that her captors took her to the middle of the desert area and kept her locked in a caravan with seven other sex slaves. In spite of being sex-slaves, these girls were made to clean the caravan wash all the clothes of the jihadists. Even a whimper would get these girls the worst beating of their lives.

Once Zainab was beaten so badly that she was unable to speak for weeks. Yet she did not give up. One night when the “commanders” were engaged with two other girls in the caravan, she and six other captives escaped from the caravan through a narrow opening. After meandering in the desert aimlessly for days without food and water, they arrived at a town and asked one of the residents for shelter. Even though the landlord refused, his son agreed in the hope getting a hefty ransom. And he succeeded in getting the ransom from the families of the six girls before releasing them. The girls are in different camps now. Zainab found out much later that the two girls who were fulfilling the desires of the ISIS “commanders” that night tried to escape later, only to be shot in the head.

Even now, about three thousand Yazidi and Christian girls are imprisoned by the IS terrorists. Some are lamenting, ‘What can we do? This is collateral damage of a massive invasion.’ This is incorrect. This is not just about raping young girls, it is about having a steady supply of girls to run their markets. This is the vilest form of slave trade. These auctions will bring in the money needed to finance the jihad. Hence the girls are just mere goods to pay for a war.

The world has witnessed multiple atrocities in the form of gas chambers, Abu Gharib, rapes in Congo and Darfur. Now it is the turn of the ISIS to show their model of atrocities. And we the weak and coward human beings will bow and beg for peace and tranquillity.