The real truth about the Muzaffarnagar riots: Part 5 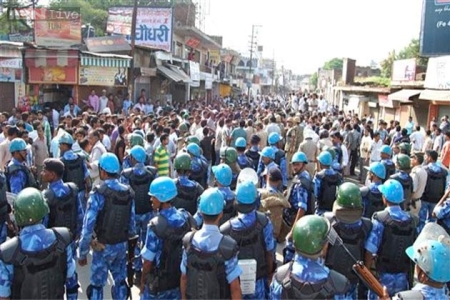 Muzaffarnagar: Due to the Police and the administration’s inept handling of the riots, Muzaffarnagar is up in flames. To make matters worse, Kaushal Raj Sharma, DM of Muzaffarnagar has become dictatorial. Given the district administration’s inability to control the riots and all round failure, they on Sunday took the unprecedented step of banning the distribution of newspapers in the city. Not just that, the DM has banned media entry in the riot-affected areas. One has not seen such a clampdown on the media in recent times. There is a great deal of resentment not just in the media circles but even among the common people at this decision of the DM. (9 September 2013)

Murders in Jolly happened in the presence of the police

Bhopa: The murderous assault on those returning from the Mahapanchayat at Nagla Madaud happened in the presence of the police and PAC. The assailants were hiding in sugarcane fields when they attacked the people in tractors. Till now, four dead bodies, 11 burnt tractors, and 2 burnt motorcycles have been recovered. Many people who were travelling in the tractor are reported to be missing.

On 7 September, the Mahapanchayat was scheduled to be held in Nagla Madaud. The administration had ensured a heavy police deployment on the way. There was a PAC platoon CO, and an Inspector. A heavy police force was stationed at Jolly Bridge. After the Mahapanchayat, the villagers were returning to their homes in tractors. When they reached the Ganganhar Bridge near Jolly, several hundred armed Muslims emerged from the fields and started firing at them. There was a stampede among the villagers. Some people from the tractor leapt towards the assailants.

Given that people from both the groups came face to face, a lot of bloodletting ensued. Some villagers left their tractors and escaped. Hundreds of people crossed the bridge and sought refuge in the houses in nearby tenements. The attackers consigned dozens of tractors to fire. Till now, four dead bodies, 11 burnt tractors, and two burnt bikes have been recovered and several people and tractors are missing. The fact that all this happened in the presence of police and PAC leaves a big question mark. It is being said that the police has recovered cartridges of several automatic weapons.

The strewn footwear and burnt ashes in Jolly Ganganahar is a grim reminder of the event. The footwear that was left behind during the rioting are still lying there. The burnt ash is a result of vehicles that were consigned to fire. (11 September 2013)

The girls of Malikpura forced to give up education

Jansat: The rioting that erupted as a result of rampant eve-teasing forced the girls of Malikpura to abandon education. The members of their respective families took this decision to preserve their self-honour. The eve-teasing which led to the rioting in Kawal not just impacted the locals, but also had a broader impact in the region. When we spoke to the people of Malikpura on the instances of eve-teasing they told us, “our girls have to cycle through a three-kilometre long route which passes through a desolate stretch to reach Kawal. After that, they take a bus from Kawal to their college. Because we cannot be with the girls all the time, we are constantly worried for their safety till they return home.” The family of Gaurav, who had died in the attack, told us, “there were two girls in the family who used to go to school. One girl had completed her 8th class and the other had cleared high school. We discussed the matter of discontinuing their education. But the girls insisted and we had to bow to their wishes and admitted them in the Inter College in Nagla Madaud. Our worries were lessened because Gaurav used to accompany them to the college. After this incident, we have made up our mind that we won’t send our girls to school anymore. Some people in the village have sent their girls to their relatives’ for further education.”

When the Jagran team spoke to the deceased Gaurav’s sister, she started weeping inconsolably. Then she told us that despite their parents’ objections, she took admission. What did she know that her insistence will result in the death of the two brothers? “We still want to study. But what do we do? Such an event has happened. Now our education depends on our family members.”

On the condition of anonymity, a resident of Malikpura told us that girls would go to Muzaffarnagar for their graduate courses. A few months ago, a few dozen men on bikes chased a girl and eve-teased her on the desolate route. When she cried for help and called for the Priest of the village, the offenders ran away. After this, the girl called her relatives on the phone. This resulted in that girl’s education being cut short and simultaneously, other girls also shied away from studies. (14 September 2013)

Shahpur: 350 Dalit families which had escaped from Bassikalan village had sought shelter in Kamalpur village’s Ravidas temple where food was made available through a community kitchen. These Dalits were angry at not having received any support from the administration. Bishan’s wife Kareena gave birth to a baby in the temple itself. Bir Sen, Vijaypal, Sunil, Om Prakash, Gyanos Jaywati, Parul, Avishkar, Manish, Himanshu and others, young and old are ill. There has been no arrangement from the Government’s side for medical check-up and that has upset the Dalit families. Former state minister Yograj Singh came to the Ravidas temple in Kamalpur and spoke to the SDM. The fear was evident on the faces of these Dalits. (14 September 2013)