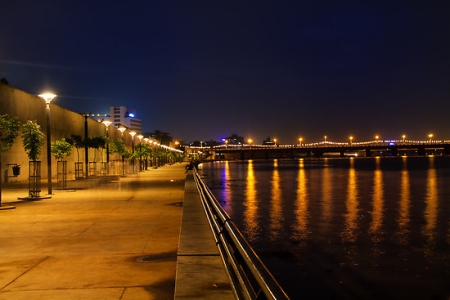 The Second Master Plan of Delhi – 2001, stated: “The possibilities in respect of river Yamuna have been studied in depth and indications are that it could be channelised within 550mt. width and an area of about 3000-4000 hectares could become available for river front development” (DDA 1999). DDA prepared a Rs 18 billion (at March 1992 Prices) development scheme for Yamuna riverfront. (Gupta 1995). The scheme envisaged development of 8000 hectares of riverbed area for recreational, residential, commercial, institutional and public purpose with private sector funding to the extent of over 60% of the total project cost. (‘Inside the Transforming Urban Asia: Processes, Policies, and Public Actions’  edited by Darshini Mahadevia.)

Rumu Banerjee, Times of India (May 3, 2010) reported “With the LG giving it the nod, DDA is going ahead with its Yamuna project which will see land on both sides of the river being greened and developed. Work on the first stretch will start in a few months and the project should be completed in five years.”

Richi Verma, Times of India (March 26, 2013) reported: The Yamuna might soon get a new lease of life, with Delhi Development Authority’s ambitious riverfront development project being put on the fast track.

Darpan Singh, Hindustan Times (September 26, 2013), reported: “Experts from Delhi University, JNU and IIT-Delhi will submit a plan for restoration and development of the dirty Yamuna banks in 30 days. The Centre has decided not to implement a riverfront development plan prepared by the DDA and has set up the panel to “critically examine and review it”.

While the riverfront development in Yamuna is yet to start, lot of things related to it have happened in Yamuna in the name of development, such as removing slums. “What the Eye Does Not See: The Yamuna in the Imagination of Delhi, by Amita Baviskar published in Economic & Political Weekly, December 10, 2011, Vol xlvi No 50″ is my source on the status of Yamuna and Yamuna Riverfront Development Project.

Since 1980s, the encouragement of Congress politicians led to the settlement of 3,50,000 squatters on both sides of Yamuna by 2004. In 2004, defecation along the Yamuna became the ground for demolition of their homes. An estimated 1,50,000 were displaced in one week of June from the Sanjay Amar Colony–the western side of the river. Mohammad Faim broke down and cried. “Nineteen years in this city”, said the white-haired native of Siwan, Bihar, “and I have to return empty-handed. How will I show my face in my village?” Until a few weeks ago, Faim was known to everyone in his neighbourhood as “Prem Hotelwala”, the owner of a successful dhaba in Sanjay Amar Colony. He is not alone, standing by the rubble of his demolished home, Abdul Barik gestured to the squalor around him, “You think we want to live like this? We are also human. We also want to live decently, without fear of being harassed and uprooted. But there is no other option.”

As per Delhi government policy they were eligible to receive a plot of 18 square metres (upon payment of Rs 7,000) to 12.5 square metres. Resettlement colonies such as Bhalaswa and Holambi Kalan were with no amenities, and 20-30 kilometres from people’s place of work (Menon-Sen and Bhan 2008). Only 16% of displaced were given plots. Evictions from the east bank in the summer of 2006 left more than 50,000 squatters homeless, most received no compensation. As far as slums are concerned, the Sabarmati riverbed was no exception. But the exception came in the form of dealing with the issue.

Nearly 12000 hutments on both banks occupied nearly 20% of the critical project area. A committee was formed under an ex-High Court Judge for finalization of beneficiaries. A Comprehensive Settlement was arrived at under the supervision of the Gujarat High Court. More than 10000 families have already been allotted houses of 26.77 sq m carpet area, in the prime locations of city. 9078 families, i.e. 6 Christian, 3874 Muslims and 5198 Hindus have already shifted and the remaining are under process.

The complex has a playing area for kids along with a recreation facility. To empower women, houses are allocated in the name of the woman member or under joint names. The SRDP revived the financial condition as well. Gurjari Bazaar is an age old Sunday Market, where women traders comprise close to 40% (half of these describe themselves as Dalits). The bazaar provides livelihood for an estimated 200,000 lower-income residents. Earlier, the Bazaar operated near the Riverfront without any infrastructure and used to spill out on the adjoining roads. It was unhygienic and had the risk of flooding. Today it is the first well developed informal market in India. A MoU was signed between the Ahmedshah Gurjari Association and SRD Corporation. Out of 1200 members of association, 726 members (60.5%) are Hindus and 474 members (39.5%) are Muslims. Now it’s spread over 70,000 sq.mt on the river front and 1600 vendors can do their business on 778 pucca platforms and 783 laris. Parking space is provided for 280 two wheelers, 425 four wheelers and 8 heavy vehicles. Lights, toilets, food-court, drinking water, and seating area have been provided. More than 800 trees have been planted.

Washermen who use the river are accused of polluting the river, but it was different in Ahmadabad. There were nearly 172 Dhobis using the river bank for washing. They were relocated to the Dhobi ghat, constructed on the eastern bank spread over approx. 9400 sq.mt area, which has RCC road, lighting and parking facility inside a compound wall. It has 7 blocks, each block with 24 units i.e. 168 units each with water supply (with water meter) and drainage system. Pulley has been provided to take the cloth on first floor for drying. This is in sharp contrast to what happened in the case of Yamuna. “Cleaning” of Yamuna, didn’t take the form of installing sewage treatment facilities but entailed removal of people. Rivers are an intrinsic part of religion, but in her 22 km-long flow through Delhi, Yamuna is neither revered nor respected. Worshippers have to bathe in sewage. Again, the condition of Sabarmati was not different, but it changed. An interceptor sewer system was constructed on both the banks of the river to intercept the sewer running into the river through 36 drainages and divert it to the treatment plants.

Today, the Sabarmati river plays an important role for all religious groups. Lord Jagannath is worshipped with the Sabarmati water before the Rathyatra starts, Jains perform group Parna (Releasing fast though a ritual) and procession of Tajiya by Muslims concludes at the river. Yamuna in Delhi is remembered only during floods or land scams.

By 2007, selectively cleared of its encroachments, the Yamuna riverfront become a money spinner. Emaar MGF, the Dubai-based real estate developer was to build the Games Village under a public-private partnership arrangement. The DDA allotted 27 acres of prime land for free to the company to build 1,168 luxury flats for athletes and officials. Under the terms of the contract, the firm would sell two-thirds of the flats while DDA would sell the remainder. Later the company appealed to the government for help sighting financial constraints and the DDA responded by giving it an interest-free loan of $100 million, to be repaid in the form of additional flats. Transparency in SRDP is routine. The cost of SRDP was estimated to be around INR 11520 million or USD 230 million. The proceeds from the sale of land created by the project is expected to cover the cost of the project, including the interest paid on construction, period loans and repayment of equity investments. The sale of the portion of reclaimed land (not more than 14% of reclaimed land, though allowed to sell 20%) is envisaged to recover the cost without stretching the public funds.

The then Chief Minister of Delhi, Sheila Dikshit had frequently mooted the idea of channelising the river in a manner resembling the Thames in London and the Seine in Paris, with the river fitting into the cityscape as a site of recreation and leisure, with cultural performances and other modes of public consumption. But the use of land so far has kept all these at bay and in fact disconnected people and river.

In contrast to this, on the banks of the Sabarmati, an area of 60,000 sq mt, has been designated for hosting events like Kite festival, Marathon, Cyclothon, Garib Kalyan Mela (for the urban poor) etc. The diaphragm walls in the bed of the river and retaining walls along both banks have created a channel for the river, stopping erosion and protecting the city from flooding. A two-level, continuous promenade on both banks is built for pedestrians, cyclists and to provide access to the water. What it means is that there will be no more private ownership of any part of the river bank. The river bank has 4 gardens and one urban forest with space for meditation for the common public. Several other benefits of this project include recharging of ground water owing to  continuous presence of water in river, decongestion of the major north – south road by providing additional link roads to parallel roads running along the river front etc.

Equally, the inclusive development that SRDP has achieved is truly unique. Never before has an urban infrastructure project, covered all sections of society and created world class facilities for the entire city to enjoy. Dean Nelson, The Telegraph (24 February 2014), UK reported: ‘Indian holy river more toxic than ever despite 600m make over’. He wrote “The Yamuna, a river revered in Hindu theology, is now a sewage drain by the time it reaches Delhi, according to a report by the Indian parliament.”

In New Delhi, Yamuna is an anomaly, an embarrassment while in Ahmadabad, Sabarmati is a part of life, source of pride, felt in the gut.

This is an expanded version of the article first published in the Mumbai edition of Free Press Journal on 16th March 2014 .

[The columnist is the author of ‘Third Curve: Saga of Women and Child Development – Gujarat.’]