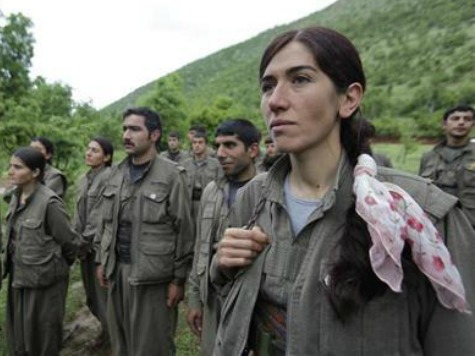 (This was sent by an IndiaFacts reader and supporter, @gobblefunk_ )

For the last few weeks we have been increasingly exposed to images of young girls in combat gear, barely in their teens, clutching on to outdated artillery. Mothers and daughters, fathers and sons are battling it out against the ISIS (Islamic state in Iraq and Syria) in Kobane, a predominantly Kurdish city along the Syria and Turkey border. The city is surrounded by ISIS territory on all sides, and has almost miraculously resisted them for over 3 weeks on gritty will and remarkable courage by the YPG (People’s Protection Units), the armed forces of Syrian Kurdistan. With reports now indicating that the fights have spilled to the streets and the fall of the city imminent, thousands of Kurdish soldiers and an estimated 300,000 civilians are staring at the prospect of a gruesome massacre not unlike others the group has carried out. This is the first time, however, that it would be taking place after the announcement of the US led coalition that pledged to “degrade and destroy” ISIS.

ISIS probably touched its moral nadir last week when it beheaded Alan Henning, a British taxi driver-turned- humanitarian worker who had spent months in a street corner collecting funds for an ambulance. He had skipped Christmas with his family to help the children of war-torn Syria. But despite the fact that it is pretty clear that ISIS is the closest one can get to evil personified, I hope that the Indian government refrains from joining what I believe to be an unholy coalition and participating in air strikes against the group. Sadly, it has become increasingly evident that this coalition is a farce and is going to be largely ineffective. I explain why in the paragraphs that follow:

The Kurds are the only group fighting against ISISfor a seemingly just cause and against an existentialist threat, without itself posing a threat to humanity in the future- an aspect that, as history shows, Islamic militants have a very poor track record with. So far, they have also been the most effective group in fighting off ISIS, amid reports of defection by members of FSA(Free Syrian Army) and Al-Nusra (an Al-Qaeda branch) to ISIS. Basically farmers and breeders of livestock, the Kurds are fighting for democracy and a right to a homeland; a right to live in peace as part of a secular fabric- features that the West would normally extoll. Instead, the coalition has been reluctant to aid the YPG due to their alleged links to the PKK (Kurdistan Workers’ Party)- a banned left leaning Turkish organisation that had waged a guerrilla war against the Turkish government in the 1980s.

The YPG’s pleas to the international community for better arms and ammunition fall on deaf ears as they are surrounded by the most barbaric group of people in recent history. The Turkish army, the second largest one in NATO, is watching barely hundred metres away on the other side of the border as ISIS closes in on Kobane, allegedly moving its tankers only to strike a pose for the cameras of large international media houses. Turkey is also allegedly a buyer of ISIS oil, the group’s largest source of revenue. Its borders have been porous for ISIS to cross over, but tight when Kurdish fighters attempted to pass to help their kin.This is a good time to remind you that Turkey is an integral part of the US-led coalition against ISIS. Coalition airstrikes, although increased in regularity over the last two days, have been largely ineffective in keeping ISIS from entering the city of Kobane.

Let us now compare the Kurds to the group that the US-led coalition does support- the “moderate” FSA, or Free Syrian Army that was founded to fight the Assad regime. There have been several disturbing reports of defections from the group to ISIS, and one can only take guesses on the arsenal of arms they took with them. A Vice documentary on Syria following the FSAhas young militants promptly reply that an “Islamic State ruled by Shari’a laws” is what they aim for- but of course “one where their Christian brothers too would live in peace”, added as an afterthought presumably for the cameras. As award winning war reporter Aris Roussinos, who has spent a lot of time in Syria embedded with rebel groups recently tweeted, “Equally, FSA & SRF, while ostensibly secular, contain very many fighters committed to an Islamic state (in some form)”. The same Shari’a laws are oft quoted by ISIS to justify every one of their barbaric acts. Groups on both sides- ISIS and the Islamic rebels fighting them, chant chillingly identical cries of “Allah-u Akbar” after every shot they fire.

It is quite obvious that the coalition has picked the wrong side to support in its war against ISIS. The collective sincerity of the coalition is also highly questionable with Turkey in its midst- there is overwhelming evidence of the country’s back-door support to ISIS. For India to join this coalition and spend resources on it is at best a waste, and at worst, blood on its hands.

While joining the coalition is a bad move, there is very little justification for the lack of concern expressed at this growing threat to peace across the world by Indians. Mass genocide and a promise of more to come does not seem to have touched the sensitive bones of any political party in India. This is in stark contrast to the massive outrage by the Congress, even stalling parliamentary proceedings in July, demanding that India condemns the attack on Gaza, questioning if our foreign policy had changed with the new government. The CPI (Communist Party of India) held rallies in several parts of India, condemning Israel and burning effigies. The AAP in its inimitable style had held a candlelight vigil at Jantar Mantar in support of Palestinians, joined gleefully by self-proclaimed secularists and intellectuals. But of course, the Kurds and Yezidis are hardly a vote bank, are they?

However, what is truly distressing is a lack of empathy by civil society itself- educated Muslims who had flooded our social media timelines with images of Gaza, humanists who took to the streets wielding banners with messages of solidarity- all have maintained stoic silence while ISIS carries out systematic ethnic cleansing and murder of innocents. While tears were copiously shed for Gaza, there are none for the brave children and women defending their homelands in Syria. The loud and emotional discussions carried out for the cause of Palestinians have fallen silent for the hundreds of thousands of Syrians. Our collective hypocrisy as a society is alarming, and should be a cause for deep shame.