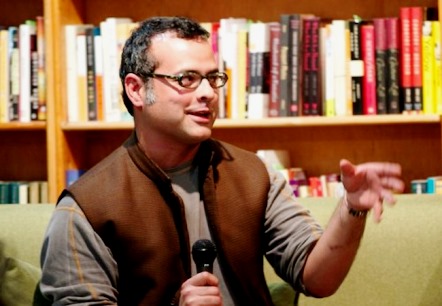 A Professor of South Asian History at Trinity College Hartford, Connecticut, Vijay Prashad, commented on the India-based French journalist François Gautier. He wrote “Hindu Holocaust?”, published on www.newsindia-times.com (25 September 2009), in reaction to Gautier’s opening of a “Hindu Holocaust” museum in Pune. Actually it got a more positive name, referring to the successful freedom struggle by Shivaji, which in turn drew a lot of flak from the Hindu nationalist side. Hindus unaware of the Jewish touchiness regarding the alleged misuse of the term “Holocaust” (in fact first used for the Armenian genocide by the Turks, which took the form of the destruction by fire of the Armenian-held town of Urfa), and of how the reference to the Holocaust would obviously put the Jewish suffering in the centre instead of the Hindu suffering that is the object of the museum, held it against Gautier that he seemingly went soft on what happened to the Hindus. At any rate, a museum was devoted to the Hindu-Muslim struggle, and Vijay Prashad didn’t like that.

Vijay Prashad is a familiar type: a Nehruvian secularist, i.e. an institutional winner but a loser on contents. He was one of the people who clamoured, after my Ayodhya lecture in Madison WI 1996, that “a scholarly rebuttal should be given”, but whose scholarly rebuttal is still awaited. For a while he took part in a debate with Rajiv Malhotra, for which a whole yahoo list was created, but he wimped out. On the Hindu Holocaust too, he takes comfortable conformistic positions but he has never written a serious rebuttal of the “Hindu nationalist” (actually purely historical) theory that Muslims killed millions of Hindus.

So, let’s see what he got worked up about. In the main, it is money:

A fundraiser in New Jersey on Aug. 16 raised $50,000 for a ‘Hindu Holocaust’ museum to be built in Pune. The museum is the brainchild of a Frenchman, Francois Gautier, and is under the auspices of the Viraat Hindu Sabha (VHS). They claim that over the past thousand years, millions of Hindus were killed, with the intention to wipe Hindus off the map.

The intention is mostly in the eye of the beholder, though I cannot exclude that there are genuinely some Hindus in America who believe that the Muslims had the intention to “wipe Hindus off the map”. Some of course had that intention, but by and large, Muslims are satisfied if Hindus convert. They can stay on the map, but as Musllims. However, no song need be made about Hindus dying, sometimes war is an Allah-ordained necessity, and so, Hindus have died by the millions. We need not even look very far: of the one to three victims of the Bangladesh war in 1971, most were Hindus, totally dwarfing those who were killed in religious riots in remainder-India since 1947. In 1947 too, the Hindu refugees from West Punjab killed by their Muslim neighbours far outnumbered the East Punjabi Muslims who didn’t make it to the Promised Land they themselves had created.

According to Vijay Prashad,

The numbers are vague, as one might expect, but the culprit is precisely defined: Islam. (…) It reduces the complexity of the subcontinent’s rich history into a simple morality play that has only two characters: the Hindu and the Muslim. The latter is the invader who has come and killed the former. Nothing else matters.

Many other things matter to the Hindu revivalists, as the array of Sangh Parivar and other Hindu organizations testify. The hyperfocus on the Hindu-Muslim conflict exists only in the eye of the Nehruvian beholder. But the focus of this one lone museum is indeed the Hindu-Muslim conflict. That is as it should be: a conflict spanning more than a millennium and a whole Subcontinent deserves a museum.

And there’s even more in the eye of the beholder: “The idea of the Hindu Holocaust casts the Hindu as history’s victim, who should now become history’s aggressor to avenge the past.” A leftist and revolutionary like Vijay Prashad cannot countenance a straight summary of facts, he has to imagine a violent “revenge”. Well, the museum’s object is just to show factual history, and the viewer is then free to decide on his own reaction.

But the Hindu was not always the victim. If you read the historical records carefully, you will find that many Hindus participated in the slaughter of other Hindus, and that the Hindu-Buddhist battles of the ancient world were perhaps more bloody than anything that comes afterward.

Which battles were those? As Sita Ram Goel once said in this same context: I am asking for one example, not two.” But the battles in which Islam wiped out Buddhism, in the 10th century in Afghanistan and then in North India at the end of the 12th, are well-attested.

With reference to Romila Thapar’s book on Somnath, Vijay Prashad asserts: “There was killing, but that was as much for reasons of warfare and plunder as for reasons of God and tradition.” He hasn’t studied Islamic history at all, else he would know that Mohammed himself commanded ca. 82 raids on caravans, purely “for reasons of warfare and plunder”, and that these very raids were the occasion to launch the term jihâd. In Islam, there is no antagonism between plunder and God.

Of course, he lists cases of Hindu magnanimity as cases of Hindu-Muslim coexistence, for example: “In the 13th century, a local raja, Sri Chada, granted a merchant from Hormuz the right to build a mosque on temple land. He also provided the mosque with a disbursement for teachers and preachers, for the daily reading of the Quran and for the celebration of festivals. The Veraval-Somanatha inscription of 1264 shows us that even orthodox Shaivite priests cooperated in the building of the mosques.” He ought to have mentioned the Vijayanagar king who employed Muslim generals, only to be betrayed by them during the momentous Battle of Talikota, when they joined the Muslim Army and inflicted defeat and destruction on Vijayanagar.

Of course Vijay Prashad cannot stand it when foreigners who defy the description as “Hindu nationalists” agree with the “Hindu Holocaust” scenario:

Gautier’s (…) work reads like another European apologist for extreme Hindutva, Koenraad Elst. Both went to strict Catholic schools and now hold a deep animus against Christian missionaries, but seem to take their venom out mainly against Islam. Gautier and Elst want to make plain the ‘Muslim genocide against Hindus’. But neither is a serious student of history, with little idea of how to read historical texts. They draw more from a misplaced passion than from a real, sober scientific exploration of the facts. That they are taken seriously is a sign of the degradation of reason in the world of Hindutva.

Well well, the loser Vijay Prashad who negates history but has never been able to produce a single paper establishing his conformistic whitewash of Islam, is now berating the museum-opener and writer of factual Hindu-Muslim history as having ‘little idea of how to read historical texts’. Texts of which he himself leaves the reading to Romila Thapar. As long as the power equations remain as they are, he will have more success with his lies than we with the facts, that cannot be helped; but eternity will know Vijay Prashad as a liar.

Meanwhile, he is mistaken in alleging that Gautier and I “have a deep animus against Christian missionaries”. Both of us have gone out of our way to explicate that we have Catholic priests among our relatives and that we have fond memories of them. At the same time, we have perfectly rational reasons for having our doubts about the missionary enterprise among the Hindus. But for those reasons, Vijay Prashad has to substitute an emotional”animus”, because the eye of the beholder cannot face a rational critique of his favoured religions.