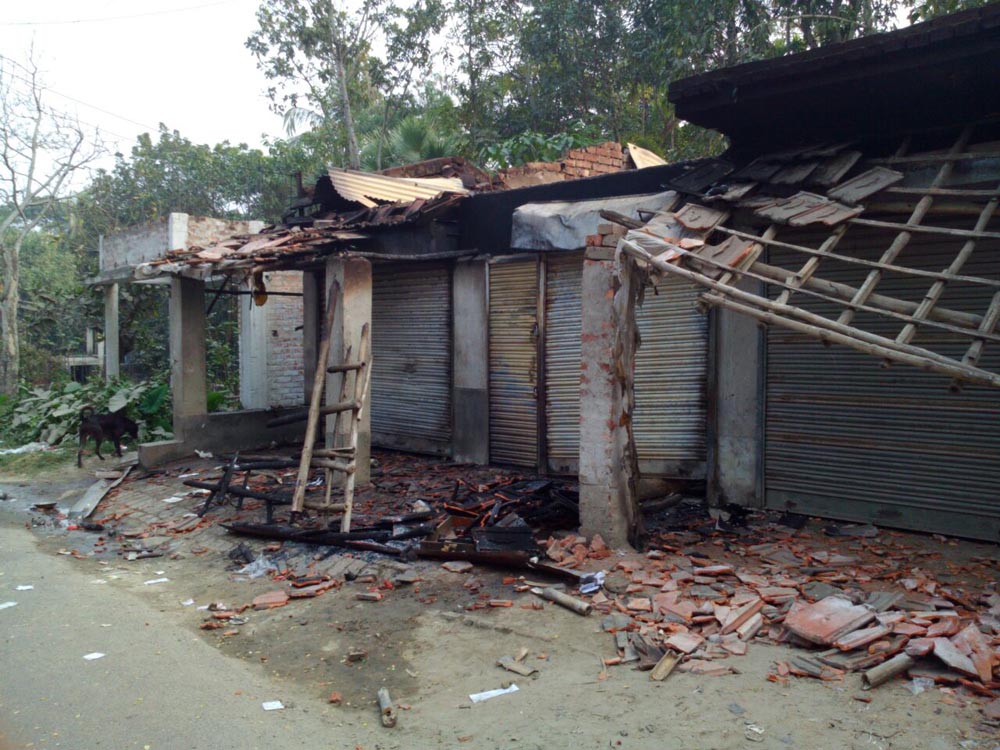 Report:  Venugopal, the Mandalam Secretary of  BJP Alappuzha was found murdered in the morning of 29 January in front of his home in IT Colony, Kalavoor. According to sources, police have not yet been able to gather more information about the assailants.

Report: Large scale violence rocked Usti market in South 24 Pargana district of West Bengal on the morning of 29 January. More than fifty Hindu shops were destroyed. Properties and cash worth more than a crore were looted from the shops belonging to Hindus. Later, a few shops belonging to Muslims were symbolically destroyed by themselves. The situation further worsened when local MLA and Minister of State for Minority Affairs, Giyasuddin Mollah reached the spot and reportedly abused and insulted SDPO of Diamond Harbour. Reportedly he asked police to release the Muslims held by the police on the spot, claiming they were his men.

Report: Two Hindu Adivasi women, Ms. Sagorika Sarkar and her daughter Beauty Karmakar were gang-raped at Vittydanga of Pangsha Upazila of Rajbari district of Bangladesh. An investigation by the Bangladesh Minority Watch (BDMW) on the gang- rape incident says that the victims were raped at a rented house of the victim situated within Vittydanga Union of Pangsha Police station of Rajbari District.

4. Hindu women abused in Bangladesh by UP chairman

Ms Nupur Goswami (28) was sexually abused by the local UP Chairman at Savar Upazila of Dhaka district, Bangladesh.

On 23.12.2014 at about 11 pm,  Hafizur Rahman went to the rented house of the victim, and knocked the door. As soon as the door opened, he caught hold of the victim, tore her clothes, threw her on the bed and started to rape her. Her resistance was futile. Rahman then left her house after threatening her not publicize the incident.

The shamed victim finding no other alternative, went to the house of Hafizur Rahman asking him to marry her. In turn, she was physically assaulted and kicked out of the house. Thereafter she lodged the first information report (F.I.R.) at the Savar Sadar Police station against the perpetrator-Chairman on 19 January 2015.

The local society has now branded her as prostitute. The Hindu leadership led by Narayan Charmakar is trying to rehabilitate the woman in the Hindu society and trying to get the victim punished. Any Hindu who wants to help this wronged woman can contact Narayan Charmakar at ukilnarayan@gmail.com.