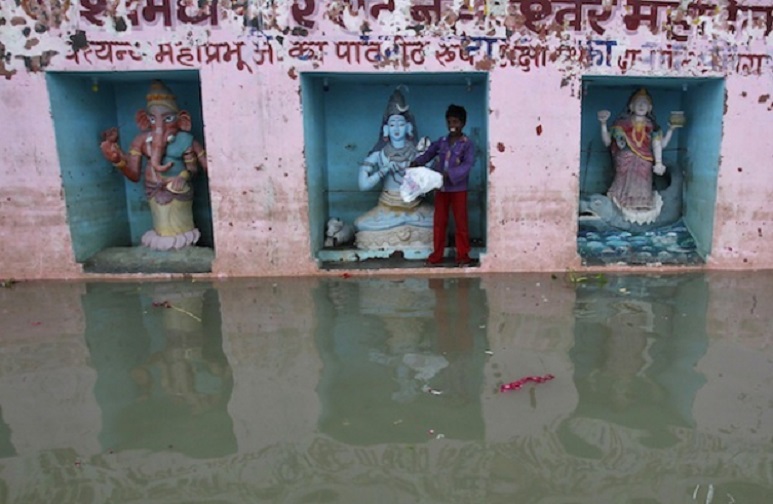 Report: A temple in Mambau, Negri Sembilan, has been robbed of deity statues worth RM50,000, Malaysia Nanban reported. The Sri Karumariamman Temple had just celebrated its annual festival on Monday.But when temple priest P. Vijayan went to perform morning rituals at 6.45am on Thursday, he was horrified to find the main gate open.He found that 15 statues made of impon (five precious metals) were missing and lodged a police report.

Report: Gold jewels were stolen from Chamundeeswari Amman temple in Keel Villivalam village near Vandavasi. According to the police, the priest of the temple Ayyanarappan locked the temple after daily poojas on Friday.

Report: Gold and silver ornaments worth Rs 1.8 lakh were stolen from the Ashapura temple in Gondal town on Friday night.The theft was recorded on CCTV cameras installed in the temple. The footage showed a man breaking the iron grill and stealing ornaments from the temple. Police is in possession of the footage and has initiated probe in the case. The main priest of the temple was not present as he had gone to attend his mother’s funeral.

Report: Antique panchaloha idols, believed to be more than 700 years old, were cut open by thieves who hoped to find gold inside. The idols of Sridevi, Bhoodevi and Chennakeshava had been stolen from Chennakeshava temple in Alur, Hassan district in November 2014. Disappointed at not having found gold inside, Ravish Kumar (24) of Nelamangala, Lokesh Kumar (29) of Peenya and Lokesh (30) of Koratagere welded the idols together. They tried to sell the idols of Sridevi and Bhoodevi for Rs. 2 crore to a businessman in Sunkadakatte.

Report: Muslim residents at Puncak Alam, Kuala Selangor, protested today against the planned construction of a Hindu temple in the Muslim-majority area, a lawmaker has said. Kuala Selangor MP Datuk Irmohizam Ibrahim, who was not at the protest, told Malay Mail Online he was informed that some 300 to 500 residents showed up to express their dissatisfaction against the Pakatan Rakyat (PR) state government for purportedly approving the construction of the temple without consulting residents.“The argument is that 95 per cent is Muslim population; they wonder why the state government did not discuss with them before approving the development,” Irmohizam told Malay Mail Online over the phone.

6.      Love Jihad ends life of a Hindu College Girl once again in Kerala.

Report: A promising post-graduation student Anuja (23) was found dead in her rented house on Friday night in Thrissur district of Kerela. Her live-in partner V. Khaleem was taken into police custody. The prime accused is a National Development Front (NDF) activist at Vadakkekad near Thrissur, the police said. He has also been accused for attempt to murder. National Development Front (NDF) is an Islamist group with a plan to adhere to the dawa (missionary work) of aggressively propagating Islam among other communities. NDF was established on 1993 and merged later with Popular Front of India (PFI) in 2006.