Why Didn’t Hindus Give Up Ram Mandir? 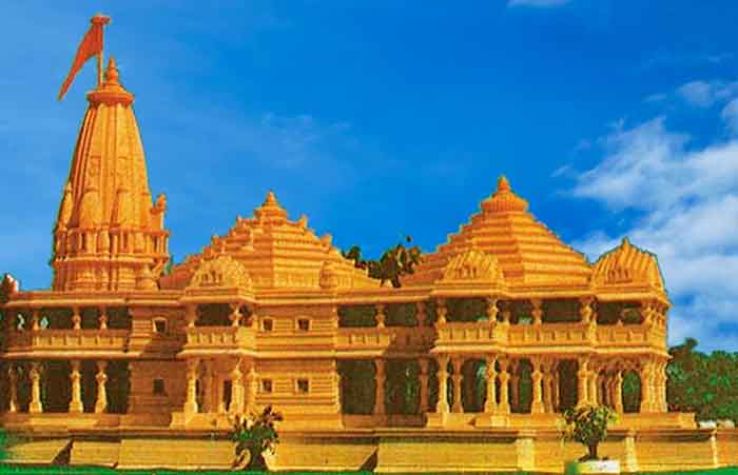 What do you say of a people who carry on a movement over a piece of land for over half a millennium? What explains that they neither forgot nor any amount of atrocities made them give up their claims on the land? That Mughal rule, Colonial rule, oppression and genocidal violence had no deterrence to their hope that one day they will regain it back.

The Ram Mandir perhaps is the only example in human history when a people struggled and fought for a period of over five hundred years to regain a piece of land from their invaders who had destroyed one of their holiest spots and thought they had exterminated their religion.

The Hindus simply didn’t give up. They didn’t accept defeat in the face of overwhelming odds, most important when their own historians were not on their side. Even though they felt discouraged and heartbroken during the long Mughal and Colonial rule when power was not in their hands, invaders who tried to exterminate their religion and their civilization, they held on tenaciously to their symbols of hope and never let despair overtake them. How do we explain it?

Welcome to the new Hindu. A one who is emerging from the ashes of history, from the dark woods of despair as the poets called it. He is claiming his human rights that were taken away from him. It is a spirit that I would call unparalleled in the history of mankind. Mocked and persecuted like a slave, told that he is a savage and no better, intolerant and cruel, he today proved everyone wrong with their prophecies falling to the dust. Has the time finally come for the Hindu and his civilization to assert himself?

I believe so and I am not the only one who dreams like that today. I believe we symbolize one of the most valuable lessons to mankind and that is to never give up hope.

The Hindu has gone through a genocidal violence that almost exterminated his existence. It is denied by the world. Period. He has been enslaved, tortured and brutalized where his Islamic and Christian invaders tried to annihilate his civilization. It is a miracle how he adapted and navigated through all those hardships and adversities. After centuries of oppression, he is finally telling the world why he continued to resist untill his last breath in the face of historical oppression.

To me, the credit for the verdict on Ram Janma Bhumi goes to the unknown Hindu. The unknown ‘kar sevak’ who braved bullets, the sadhus who bore the lathis, the unknown man from the village who saved money to send a brick for the temple. It is they who kept the flame of the movement alive, hoping for the day when Shri Ram will be restored to his birthplace.

The temple when it is built will represent and stand for much more than a temple. It will be a monument to man’s courage in the face of religious persecution. It will bring hope to generations who may feel despondent about their oppression. It will be a symbol for the persecuted minorities and majorities worldwide to struggle and regain their lost heritage. To all Hindus barring a few, it will be a symbol of devotion, hope, and resilience.

To some it may become a symbol of shame, that is if they have that in the first place, an atonement, a reminder of what they ought to have done being a Hindu but never did so. They were the ones who distorted history, fought against the truth of the excavations.

The Hindu society has come a long way since the first temples were destroyed by the Islamic invaders centuries ago. Our society has been in grief, traversing from denial to rage to bargaining and rationalization as Elizabeth Kubler Ross explained it half a century ago in explaining her stages of grief. The grief has made the Hindu society stronger, more resilient and able to withstand the adversities that colonialism, persecution, and atrocities bring along with it.

It is time we acknowledge this resilience in our own. It runs in our blood and bones. We may have a thousand faults in ourselves as people, some real, some imaginary, but we need to still tell ourselves, our children and our future generations that we are a people who simply don’t give up when faced with obstacles. That there are very few people like us possibly with the exception of Jewish people. That our Vedas, our books have left something permanent, a residue, however small, within us that psychologically prepares us, ready to bounce back with each fall despite a thousand obstacles that may come in the way. It didn’t make us feel conceited and egoistic, but perhaps a little naive that we fail to acknowledge the greatness of our civilization that our ancestors created and one that may be forgotten.

What is unique about the Ram Janma Bhumi site? I believe one of the things that set it apart from any other place is that apart from the birthplace of Sri Ram, it is a sacred space with a memory that didn’t die and showed it can never be destroyed.

Many years ago I had gone and knelt in front of the Ram Janma Bhoomi. A strange feeling had taken over me. It was as if the space was telling me ‘I don’t have to justify my existence to you or anyone. I am there in your heart. It is you, who have to justify the sacrifice of those who died in my name’.

In that moment, I felt it was as if the space just didn’t tell me the story of a temple destroyed but the entire story of Hinduism.

I had realized what the ancient Hindus, my ancestors would have felt hundreds of years ago before their temples were destroyed, before they began to live in terror feeling the threat of conversion.

The Ram Janma Bhumi trial apart from one of the longest-running trials of history is also important for another reason. It represents a crime against humanity, a genocidal crime whose purpose was to erase the very existence of a people, their religion and culture. The tragic fact is it continues through other methods today in the form of mass conversions and the building of numerous religious structures that do not preach co-existence between faiths.

Many years ago I had visited a concentration camp in Germany. Outside the gate, there was a sign written ‘never again’. Showing me a large number of school children, my guide told me it was meant for the future generations so that no one ever dares to do it again. Should we also not have museums next door? Should we not create a memorial to the unknown ‘kar sevak’ who gave his life? Maybe only then it will tell our children the true story of what it means to uphold our freedom. Shouldn’t Ram temple, Somnath temple be the places where history should be taught to all our children so that they begin to say ‘never again’?

‘Never Again’ may be two most important words that we need to learn if we have to preserve our civilization. I ask that we start teaching it to our future generations.

The article has been republished with permission.

Rajat Mitra is a psychologist, a speaker and the author of ‘The Infidel Next Door’. He can be reached through his website www.rajatmitra.co.in