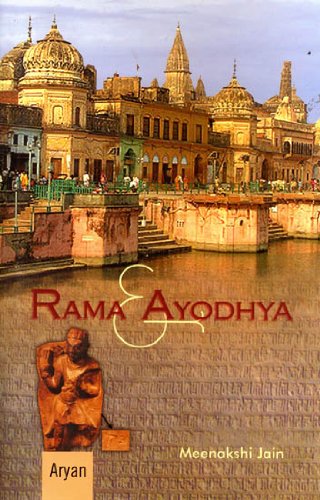 There are very few publications giving a factual account of historical facts underlying the Ayodhya controversy. Yet this controversy has played a decisive role in recent Indian politics, giving the BJP the electoral breakthrough that ultimately brought it to power. Therefore, it ought to be a matter for surprise that the professional India-watchers and the academics concerned remain satisfied with the handful of very partial and highly partisan treatments available in print. But the prevailing poverty of information on at least the factual basis of the affair has now been remedied. This book Rama & Ayodhya by Dr. Meenakshi Jain (Arya Publ., Delhi 2013) will henceforth be required reading for anyone pronouncing on Ayodhya.

Dr. Meenakshi Jain is a historian formerly with the Nehru Memorial Library, presently Associate Professor in History at Gargi College, University of Delhi. In this book she gives a very detailed enumeration of all the sources of a pre-Muslim veneration for or cult of Rama: inscriptions, sculptures and literary references. These already start in the pre-Christian age and soon cover all of India. Yet, the Marxist historians started the Ayodhya controversy in the late 1980s by claiming that there could not have been a pre-Muslim Rama temple in Ayodhya as Rama worship is of more recent vintage. This chapter concurs with the testimonies to Rama worship of the historians employed by the Vishva Hindu Parishad in the Government-sponsored scholars’ debate of 1990-91, except that it is far more complete.

Highly original is the chapter on Hindu testimonies of Muslim iconoclasm and the counter-measures which Hindu society took to prevent or remedy instances of iconoclasm. Particularly under Maratha rule, Hindu ownership of Muslim-occupied places was often restored. But this process was not easy and even in the Maratha domains far from complete. Often there was a factual Maratha but a nominal Moghul sovereignty to which lip-service had to be paid. Sometimes also, the local Brahmins were so fearful of a Muslim return to power that they preferred whatever humiliating makeshift arrangement they had negotiated to a full restoration of the erstwhile Hindu temple. Often idols were dug up from their shelters in the ground and rituals were prescribed in the event of their restoration. These testimonies supplement the Muslim testimonies of iconoclasm presented by Sita Ram Goel in his epoch-making book Hindu Temples: What Happened to Them. Significantly, the “eminent historians” do not touch the subject with a barge-pole.

Another chapter gives an exhaustive enumeration of all the testimonies, including statements made in court, for the tradition that the Babri mosque had replaced a Hindu temple. Here again, many instances will sound familiar to those who have closely followed the debate, but the list stands out by its completeness. It includes pre-colonial European testimonies as well as reports by colonial officers, but most numerous are the testimonies by local Muslims. It also cites the verdicts and internal correspondence of the magistrates, and some statements by politicians. They all prove that until the 1980s, it was a matter of consensus that the Babri mosque had been built in forcible replacement of a Hindu temple. It was shared by all parties concerned: Hindus, Muslims, European travellers as well as British administrators and scholars. Yet, in a very sudden reversal, a statement by the “eminent historians” from JNU in 1989, statement which already was questionable at the time and has been proven false since, managed to make practically all media and all Indian and foreign observers turn against the established consensus and present it as the “Hindu fundamentalist myth”. I am proud to say I was an exception. But now, that consensus has been restored, and unwilling secularists still denying and lambasting it are fighting a fruitless rearguard action.

An even more damaging part for the secularists is Meenakshi Jain’s presentation of their own testimonies in court. For the first time, we get to see how one after another, the secular “experts” collapse or lose their credidibility when subjected to cross-examination. One after another admits under oath that he or she has no experience with or no professional competence on the history or archaeology of Ayodhya. Their bluff was enough to fool the mass of secular politicians and gullible press correspondents, but failed to stand up to critical questioning. The Indologists who have invoked those “experts” as arguments of authority, can somewhat restore their lost honour by publicly naming and shaming them and by apologizing for following in their footsteps and ridiculing the old consensus – rather than, at best, looking away and pretending there never was an Ayodhya controversy in the first place; or, worse, still keeping up the false allegations that once swept the concerned public opinion across the globe.

The book also discusses related court cases, the strange fact that a deity can act as a juridical person (though, like a minor, it has to be represented by a fully empowered citizen), and the archaeological findings as well as the unsavoury controversy around these. Ultimately, they all turn out to support the old assumption that the Babri mosque was built on a demolished Hindu temple.

One point I disagree with, is her seeming acceptance of the VHP thesis that the Babri mosque replaced a “magnificent” Rama temple. Some temples which lay out of the way of the population centres and military routes failed to attract attention and thus survived; the famous temples of Khajuraho come to mind. But Ayodhya became a provincial capital of the Delhi Sultanate, and it is simply unthinkable that a sizable Hindu temple, a place of pilgrimage moreover, could have survived the Muslim conquest and occupation. This scenario denies the large-scale and systematic Islamic iconoclasm which could not have spared a major place of Hindu pilgrimage; a deluded secularist could have thought it up, but those who believed the VHP was anti-Islamic will be surprised to learn of the whitewash of Islam implicit in the thesis that a Rama temple could subsist for centuries in a centre of Sultanate power. More likely, Babar found an existing mosque on the spot, in dilapidated condition (as a consequence of the collapse of the pre-Moghul Lodi dynasty) or, like in the recent past, under Hindu occupation. Only because he restored it as a mosque has it been called the Babri mosque. Early in the Ayodhya debate already, a theory surfaced that the “Babri” mosque had been built in the preceding Sultanate period, as testified by its building style.

On closer inspection, this position is truthfully described in some detail on p.292-4 as coming from the pro-temple archaeologist R. Nath as well as from the pro-Babri (and otherwise also disgraced) historian Sushil Srivastava, but without evaluation. In the preface (p.xvii), she only says that Babar “allegedly” destroyed the Rama Janmabhumi temple, so the reader cannot find anything wrong in her presentation of the controversy. At any rate, the mosque called Babri Masjid was certainly built after the demolition of a Hindu temple, but it is not sure that this was done by Babar. Not everything in this case is known, but the core of the matter, viz. that Islamic iconoclasm motivated by Prophet Mohammed’s precedent destroyed a major Hindu temple, has been firmly established.

This is henceforth the standard book on the Ayodhya affair. Any so-called expert who now fails to refer to it, is not to be taken seriously.